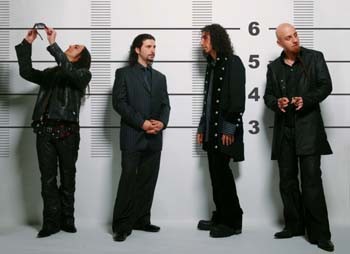 System of a Down

Line-Up: System Of A Down releases half of this year’s good news.

Has SOAD made the album of the year?

As an album-of-the-year candidate for the tumultuous 12 months of 2001, System Of A Down’s outspoken metal classic Toxicity was hard to beat. The album was notable in part for the track “Chop Suey!” perhaps the most visible song banned from the Clear Channel Communications radio network in the wake of the 9-11 tragedy. At the time, the song’s desperate martyr imagery was considered too specific, almost suspect coming from a band whose members are American-born Armenians. But the moment demanded music that was conflicted and intense, and ultimately, Toxicity established SOAD as multi-platinum selling metal leaders.

Does System Of A Down’s latest disc Mesmerize (Sony) have what it takes to contend for 2005’s album of the year? We won’t know the answer until this fall, when the band releases Hypnotize, the second half of a two-disc set they’ve chosen to release separately rather than together. This maneuver counters rock’s prevailing mode for double album releases–i.e., issuing two separate albums at the same time, as folk-pop hero Conor Oberst did earlier this year. Mesmerize is only half the story, and with a disc package that opens backwards, there’s some evident intent to confound the fans.

Nonetheless, Mesmerize does find System Of A Down at an interesting intersection of metal trends. Current heavy rock seems compelled to be either hyper-technical and difficult, or hyper-emotional and accessible. The spastic noise-punk of hardcore acts like the Blood Brothers and Space Tourists is music that’s purposefully complicated. Bands like Shadows Fall and Mastodon are following a strict Iron Maiden-like level of progressive musicianship. But if you prefer sentiments and intimacy, there’s the heartache of yearning “emo-metal” bands like Killswitch Engage and Thursday.

These tendencies are in bloom on 2005’s important heavy rock releases. The Mars Volta explore a diverse prog-metal that explodes with passion on their Latin-flavored rock-opera Frances the Mute (Universal). Industrial-goth god Trent Reznor is more open and direct than ever on [With_Teeth] (Interscope), his re-emergence with his band Nine Inch Nails. Mainstream supergroup Audioslave’s sophomore disc Out Of Exile (Interscope) pursues a post-grunge thoughtfulness. Dancing between these trends is Queens of the Stone Age’s Lullabies to Paralyze (Interscope), a disc too consciously art-punk to be too technical or too real.

System Of A Down does it all. Mesmerize features their trademark odd sound, where violent stop-on-a-dime tempo and rhythm changes are organically crossbred with Eastern European melodic roots. By now, their abrupt musical shifts are about more then convoluted riffs; more importantly, song sections are divided into emotional contrasts. In the same way grunge played loud against soft dynamics, SOAD plays wacky brittleness against imploring empathy. Much of the credit for these precision flailings goes to vocalist Serj Tankian, whose delivery shifts from tweaker Hobbit to raging bullroarer to sad poet as suddenly as the riffs change.

Heavy rock is finally running parallel to this spastic/sublime duality, and rock in general is finding the topical passion SOAD has always offered. On Mesmerize, they’ve already begun shifting their pointed ire from institutions to the politics of human behavior. The disc opens with two substantial anti-war jabs, but works its way to two concluding strikes against an easy target, Hollywood. They’re attacking–and grieving over–a collapse of ideals.

Hypnotize will have to be the better half of Mesmerize/Hypnotize to make the set a championship “album” of 2005. At the year’s near-halfway point, though, the anti-war pile driver “B.Y.O.B” is certainly up for song of the year. The song’s thrashing shifts include the uncomfortably bluesy refrain “Everybody’s going to the party, have a real good time / Dancing in the desert, blowing up the sunshine.” Then, the band wails out three questions, but only two have answers. “Why don’t presidents fight the war?” is a silly question, and “Why do they always send the poor?” is a question whose answer is stunningly obvious. But the unsettling yet plainspoken question “Where the fuck are you?” is where System Of A Down offers a challenge aimed to outlast the trends.