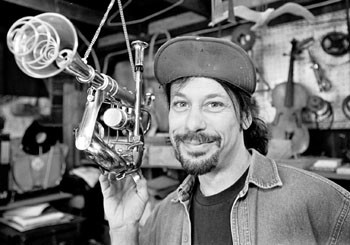 And Carry a Big Fork

Monty Monty uses the family jewels for his art

The typical male antidote for the sorrows of aging is to buy a little red sports car. But when artist Monty Monty reached his 40s and noticed the dreams of his youth slipping away, he opted for more radical therapy.

Monty quit the 9-to-5 graphic arts job he held for 15 years and sold his home. He rented a small house in Santa Rosa, which he shares with his landlady, and turned the garage into a studio. Then, with his newly acquired time and funds, he set out to become the artist he always wanted to be.

“My mother died at my age [of cancer], and that tends to play with your head,” says Monty, whose work will be on display at the “Moonlight Son-Art-A” show, March 16-18.

“I looked at my life and thought, ‘What am I waiting for?’ Art had always been my passion. I’d been creating it forever and showing it for about 10 years. And it was time to plunge in. I didn’t have a family to support. There was nothing to stop me but fear.

“So I took a leap of faith, let go of all the security blankets, and followed my passion. But it’s scary as hell. You know, there’s a fine line between taking a leap of faith and jumping off a bridge.”

And now, it seems, Monty has found himself on the verge of soaring–if he can just hold steady for the time being.

It’s been about 18 months since he started creating art full-time, and his reputation is growing faster than his income. Art has never been a secure field–as any starving artist will tell you–and getting a financial foothold is no easy task.

“My tax man tells me that if I keep going at this rate, I’ll be broke in a year and a half,” he chuckles. Luckily, there are people whispering in his other ear, encouraging him, telling him that soon enough the tide will turn. For example, there’s Khysie Horn, owner of the Quicksilver Mine Co. gallery in Sebastopol. “Things are going to happen for Monty,” she says. “He’s going to go places, if he can just survive through this stage.”

His bedroom is tiny and cramped with art. The garage/studio looks like it’s in desperate need of a good cleaning, overflowing with old rods and poles, keys and clocks, spoons, forks, bowls. But this is the stuff of Monty’s art. He assembles all these pieces of “vintage collectibles,” as he calls them, to create his works. And once he brings these disparate parts together, the pieces take form and look like–well, at first glance, they usually look like a bunch of junk stuck together.

But given a minute or two, these pieces of a puzzle start playing in your mind, coming together, making sense.

For example, take his work Hanging by a Fork (a wordplay on “hanging by a thread”), where the pieces are fit to resemble a nude figure. The head is made of an oyster shucker (perhaps used to access a pearl?), the legs are carpenter rules (maybe to measure the distance from here to there?), and the body is fashioned out of an oblong jeweler’s tool once used as a type of tweezers to hold jewels.

Right in that groin area, where tool and rulers meet, Monty has strung up a found iron wire that happened to be bent in a shape resembling some “family jewels.” Also attached to the string is a fork.

The fork in the piece stands for more than just the need for sustenance. Monty came across this particular eating instrument over 20 years ago on a campground in Washington state. That was back when “Monty” was still just his first name and he had a regular ol’ last name. He says he’s not sure how he morphed into Monty Monty. “I’d create art, and when something was finished and felt right I’d say, ‘That’s a Monty!’ And then I started calling the pieces ‘Monty Monty,’ and I started calling myself that as well. I don’t know, it just kind of happened,” he says, adding that when he was little, he honestly thought his name was “Monty! No, no!” “I told my first teacher that was my name because that’s what my parents were always saying.”

Little Monty may have been a terror, but instead of giving him Ritalin, Monty’s parents gave him butcher paper–rolls and rolls of the stuff that he could draw on and cut and decorate.

Eventually, as a young man, he set out to make his way in the world as a graphic artist. And he found himself living on a campground near Spokane, Wash., while hunting for work. One night, as he was preparing for a big interview the following day, his black lab, Reno, got skunked. So Monty spent the little money he had left–except for his very last dollar bill–on tomato juice to bathe Reno in hopes of getting rid of the stench. Broke, stripped down to his shorts, washing his stinking dog with tomato juice, Monty stood there in the middle of that long night wondering what life would bring.

The next day, he showed up for the interview and started it off saying, “I know I smell like a skunk. . . .” He got the job. But he remained on the campground until his first paycheck came. “For the next week, all I ate was hot water mixed with the remaining tomato juice and those little free packets of ketchup you can get,” he recalls.

But he never did give up that fork–and he never did spend that last dollar bill. In fact, that very same bill is being held aloft in the hand of the Hanging by a Fork figure.

“Most people save the very first dollar they earn,” Monty says. “I saved the very last one I had. Maybe it’s good luck.”