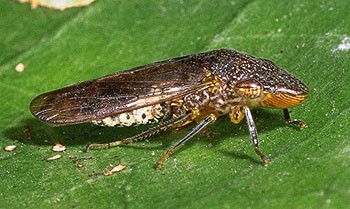 Wine country is on the edge of its collective seat: It’s glassy-winged sharpshooter season. The sharpshooter is known to carry Pierce’s disease, which is deadly to grape vines. Through stringent inspections, the Napa and Sonoma County agricultural commissioners have stopped the pervasive insect at nurseries, where it arrives on plants and trees shipped from infested counties.

To keep the insect out of vineyards, agricultural commissioners and the California Department of Food and Agriculture have the authority to spray synthetic pesticides in residential areas and public places, even over the objections of property owners and residents. To date, 15 counties have been sprayed.

Because forced pesticide spraying would polarize the North Bay community, last year agricultural interests and environmentalists in Sonoma and Napa counties negotiated agreements designed to protect vineyards, the environment, and the public health. The universal wish, though, is that the agreements will never be tested, as there are some sticky questions.

For example, Lowell Downey, who serves on the Alternative Control Committee of the Glassy-Winged Action Task Force in Napa, says that few people may know that they can refuse synthetic pesticides. In the event of an infestation, agricultural commissioners will go door-to-door in affected areas. As they make their rounds, Downey wants commissioners to ask residents if they prefer organic alternatives.

But Greg Clark, assistant agricultural commissioner in Napa County, says they’ll only mention alternatives to people who object to synthetic pesticides. Downey notes that this amounts to a “don’t ask, don’t tell” policy. “If they don’t let people know what their options are,” he says, “people won’t be in a position to choose alternatives.”

Clark hesitates to advertise alternatives because no one knows if they’ll work; results of testing alternatives won’t be available until April at the earliest. The effectiveness of synthetic pesticides is also unclear, however. The sharpshooter persists in areas of Tulare, Fresno, and Butte counties that have been sprayed several times over with synthetic pesticides.

“We want our agricultural commissioner to be the voice that says that pesticides are a legitimate concern to anybody, both for environmental and health reasons,” says Dave Henson of No Spray Action Network in Sonoma County.

Residents should also be aware of another sticky question, whether synthetic pesticides can be forced on them. According to the Sonoma County agreement, says Shepherd Bliss of No Spray, “Before [agricultural commissioners] can spray, they have to get the No Spray people to agree that the situation warrants it.” John Dyer, attorney with CDFA, says, “The state agreement to which the county agreement is attached contains contingency provisions that, in certain theoretical circumstances, could override the county agreement.”

Cost is another crucial question. The state pays for CDFA-recommended treatments in residential areas but not for alternatives, such as picking off or vacuuming insects and eggs, using organic pesticides, and removing infested plants. The time, energy, and money required to apply alternatives may prevent residents from choosing them.

But Nick Frey, executive director of Sonoma County Grape Growers Association, says, “If the cost of [alternative] treatments was a major stumbling block, we’d want to know, and we’d want to try to address it.”

In spite of these issues, there’s reason for optimism. Bliss says, “We have negotiated in good will, and I think they have also.”

To prevent interference from CDFA–the wild card–Bliss says, “We are asking citizens at this point to cooperate, to find alternative methods.”

Summing up, Mari Russell of No Spray says, “We’re ready to go into gear for a community working together to eradicate the sharpshooter, or to do civil disobedience if the state comes in and overrides the community agreement we made.”

To date, No Spray Action Network has trained 150 residents in civil disobedience.