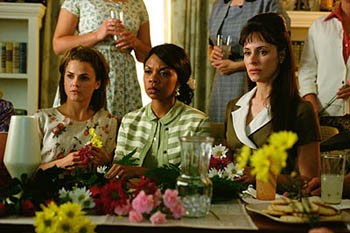 A feminist historian looks at Vietnam, the ’60s, and ‘We Were Soldiers’

In We Were Soldiers, Mel Gibson’s blood-soaked Vietnam epic, nearly 20 minutes of valuable screen time are devoted to the home-front activities of the soldiers’ wives waiting fearfully at home in Fort Benning, Ga., while their men engage in battle thousands of miles away. Given that the movie is 140 minutes long, this still leaves a full two hours for the traditional bomb bursting, napalm dropping, death dealing, and martyrdom that are war movies’ bread and butter. But according to feminist historian Estelle Freedman, what’s truly earthshaking about the film is the very existence of scenes focusing on the stories of women.

“What it says is that, in Hollywood films, even war movies have come to recognize that there is a women’s audience,” says Freedman, cofounder of Stanford University’s feminist studies program and author of the illuminating new book No Turning Back: The History of Feminism and the Future of Women (Ballantine; $26). Women, as major consumers of culture, are now insisting that their stories be told, Freedman says.

And Hollywood, it seems, is listening.

We Were Soldiers takes place in 1964 and 1965 and follows the first battlefield engagements of U.S. soldiers in Vietnam. Historically, it is a time when, as Freedman puts it, “The belief in the heroism of war is still strong. War and sacrifice have not been tainted yet with the discontent that’s going to come in the late ’60s and early ’70s.”

So the film’s depiction of Tupperware wives waiting at home for telegrams from the War Department is accurate?

“The changes,” says Freedman, “would come along a little bit later than that.”

In addition to the home-front ladies, the film hints at the stories of women on the war front, with fleeting glimpses of army nurses tending the wounded, of female war correspondents arriving postbattle to snap pictures of the carnage. Not mentioned in the film are the women in the antiwar movement at home–women who presumably would have had a lot to say to the faithful wives of We Were Soldiers.

In many ways, says Freedman, these women were not all that different.

“Early on, women were mainly providing support services in the antiwar movement, as they were in the civil rights movement,” Freedman suggests. “Which meant making the coffee, running the mimeograph machine, providing all those creature comforts, then stepping back as the men played the leadership roles.”

Freedman recalls one seldom mentioned antidraft effort, in which young women were recruited to go out and offer draftable men a good, antiestablishment roll in the hay, more or less in exchange for the men’s resistance to the draft.

“It’s true. There were buttons that said, ‘Girls say Yes to boys who say No,'” Freedman reports. “Joan Baez was once featured on a poster with that slogan. The idea being that–in the counterculture, not the mainstream culture–women couldn’t burn their draft cards, but they could say, ‘We’ll go to bed with those brave boys who resist the draft.'” Talk about bar girls.

“I actually have one of those buttons,” she laughs. “I told this story in one of my classes, and somebody brought me the button a few days later. This is exactly the kind of thing that gave birth to modern feminism. When women started moving out of those movements, it was partly in reaction to being stuck in that sexually objectified, exclusively supportive role.”

That We Were Soldiers shows women who never question their role as the supporter of their husbands makes it no less important a film, suggests Freedman. “It’s 1965,” she says. “It’s still a little early for the wives of soldiers to be doing that kind of questioning.

“But in a few years, these women will be asking a lot of questions.”