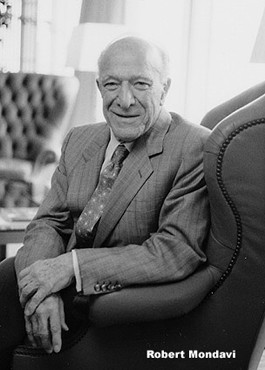 Some years ago at the newspaper where I then worked, the receptionist, who was all of 19, assured a group of us that she knew all about fine wine. “I only drink Robert Mondavi,” she qualified, with a flip of her hair, “Opus One. It’s the best.” This anecdote is what came to my mind this week as news outlets reported that the Napa Valley vintner died on Friday, May 16. It’s illustrative of just how Mondavi’s name had become to California wine as, say, Cadillac once was to automotive transport. And “the best” is exactly what the hard-nosed vintner was ever striving for.

When Disneyland looked for a partner to add some wine country class to the new Disneyland California in 2000, it looked to the Robert Mondavi Corporation. The thrill ride with the mouse lasted less than a year, but the venture points up another aspect of Mondavi’s legacy: he was a great popularizer of varietal wine.

We do now, but it has not always been taken for granted that bottles of California wine stand shoulder-to-shoulder with the best of Europe. Half a lifetime ago, $80 Napa Valley Cabernet Sauvignon was not the run-of-the-mill, ho-hum fact that it is today. The Napa Valley in the 1930s was a land of concrete vats and redwood tanks when Robert Mondavi began working there after Prohibition. No whiz kid, he was already pushing 50 by the time he toured the great vineyards of Europe. When he sought to move the family business into a new era, melding European traditions with industrial-scale, modern winemaking, he ran into conflict with his brother Peter. After some famous fisticuffs and a lengthy legal saga, Robert Mondavi split off to build his own mission-style winery, and the rest is history.

Through deft use of technical innovations and the marketing of pedigreed varietal wines to a quality-conscious public, Mondavi grew a wine empire. By 2004, the documentary film Mondovino cast the upstart of the 1960s in the role of corporate baddie. A wine magazine article that I coincidentally received in the mail at the end of last week celebrates Napa’s bold vintners of 1968. It barely mentions Mondavi. Certainly, there were many others, as well as those winemakers who trained at “Mondavi University,” as his winery was called, and gained fame on their own (at the 1976 Paris tasting, for instance). In later years, the Mondavi name was being traded on to move a river of mid- and bottom-shelf product, Coastal and Woodbridge. Mondavi, in fact, criticized what he saw as the dilution of his wine.

Ultimately, it’s more realistic to talk about the diffusion of Mondavi’s approach to wine. Who adopted some of the time-honored European traditions of winemaking to California-sized production of scale, so that more than the few could enjoy the fermented fruits of innovation, and how ubiquitous are some of these methods throughout California, and the world?

From nurturing a generation of winemakers to generous funding of educational and artistic venues in the Napa Valley and UC Davis, the empire that Mondavi created reaches much further than any that he could ever own. And whether we reach for a bottle with his iconic Mission-style label on shelves high or low, is hardly relevant to this legacy now.

Even as the world notes his passing, Mondavi has perhaps managed to convey one last great advertisement for the benefits of a life lived with California wine—he was 94.