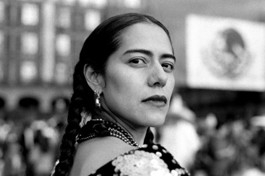 It’s hard to believe that our own homegrown Harmony Festival, which could truly claim the phrase “We were a festival before festivals were cool,” is celebrating its 30th anniversary this year. But it’s harder still to fathom that after teaming up last year with mega-promoter Live Nation, a $4.4 billion subsidiary of Clear Channel, and getting the short end of the financial stick, the Harmony Festival was nearly forced to roll back its tie-dyed tents and call it a day.

Instead, festival organizers rolled up their sleeves—and according to reports, mortgaged their homes—to stay above water. The strength of the community surrounding this beloved festival helped Harmony come back bolder than ever this year and nurtured a lineup sure to have dancers twirling so hard they just might lose their solar vegan cookies. Damian Marley, whose Welcome to Jamrock was the biggest reggae album of 2005, competes—wait, this is the Harmony Festival—I mean, cooperates with George Clinton for the big headlining slot, while brilliant lesser-knowns like Lila Downs (above), the Devil Makes Three, Tina Malia, RJD2 and the Goddess Alchemy Project are highlights of two days of global unity and good vibes.

With over 300 vendors and exhibits on spirituality, ecology and sustainability, Harmony was also green before green was cool. This year, the activism is direct: for every ticket sold, a tree will be planted in Africa, and a whopping $20,000 will be donated outright to orphans’ medical care in Ethiopia. Tibetan refugees are among Harmony’s other charitable beneficiaries. Such good causes could have gone ignored considering Harmony’s financial hardship from last year, but that’s just not Harmony’s style, making this year’s festival a resounding triumph of the will and the spirit of giving back. www.harmonyfestival.com

When you see dripping-with-diamonds socialites both well- and high-heeled nursing Champagne flutes and cavorting around the dusty infield of a baseball diamond, you know you can only be at one place: the Sonoma Jazz + Festival.

But wait, you ask, how can I perform the addition of the integer of my jazz to the integer of my festival, and what sum might it equal? Fear not, for this is no “new math” equation; the “+” is merely to concede the annual presence of acts in Sonoma outside of the jazz realm. In the past three years, non-jazz acts have included Steve Miller, LeAnn Rimes and Boz Scaggs. This year, May 22&–25, Kool & the Gang and Bonnie Raitt have all true jazz fans riled. Although how fresh would it be if Kool & the Gang brought Howard Wiley to sit in? Or if Raitt actually learned some Wes Montgomery licks and dropped ’em into “I Can’t Make You Love Me”?

On the jazz side, this year’s lineup includes legend Herbie Hancock (above), fresh from winning the world’s most unlikely Album of the Year Grammy award for River: The Joni Letters, and sleepy songstress Diana Krall (see p57). (Tip: come early that night to catch Julian Lage and Taylor Eigsti, who, at the Healdsburg Jazz Festival last year, were the hands-down, most jaw-dropping guitar-piano duo I’ve ever seen).

Another thing—he’s been around here before, but damn if the Rev. Al Green isn’t on a roll. The Reverend doesn’t play long sets, but in addition to hits like “Let’s Stay Together” and “Here I Am,” look out for tracks from his newest album, Lay It Down, which was recorded with ?uestlove from the Roots. Original mixes of the album contain Wu-Tang samples, which would probably be lost on the average Sonoma crowd (last year, to praise Tony Bennett, many concert-goers hoisted their canes in the air—I guess that’s close to puttin’ your hands in the air) but will help give Green yet another comeback in an unbelievable career.

But the true wonder of Sonoma Jazz + is the balance of atmosphere: it’s in an outdoor tent and yet it still feels elegant. Upscale food and drink booths abound, there’s a ritzy-ditzy VIP area, but still, everyone waits their turn in line for the Port-a-Pottys. Crazy! www.sonomajazz.org.

The first woman to walk by in one merely looked brave. After all, it was brightly colored, oversized and required a certain confident sway of the hips to carry off. The second woman to walk by in one looked more regular, the eye having adjusted to the bright hue and the large shape. The third woman to walk by in one looked flat-out great. The fourth, spectacular. By the time the 10th woman walked by wearing an oversized straw hat with a massive upturned brim in a fabulous jewel tone, I was sick with desire. Must. Have. Hat! A green one was duly procured and on the first sustained wearing, dyed my forehead a bird-of-paradise yellow that resisted two showers.

Such is the force of the Russian River Blues Festival that a day begun with an all-wheat breakfast (toast followed by beer), and otherwise consumed with floating in the Russian River, reading through the Sunday paper and browsing for oversized hats while great music wails is almost mythic in warm summer memory.

This year, June 14&–15, promises to be just as story-worthy with outstanding headliners that mark the range from way famous (Jonny Lang) to should be famous (Earl Thomas). Shemekia Copeland is above. Now in its second year under Omega Productions since Lupe de Leon sold the event, the Russian River Blues Fest promises to be exactly as it’s always been: hot, hot and hotter. Baby, you’ll need a hat. www.russianriverfestivals.com

We’re always hepped to learn about anything that happens in the Napa Valley that isn’t solely about putting stuff in your mouth. And so it was that when notice of the first annual Napa Valley Art Festival was announced for May 31, we jumped. The brainchild of Connolly Ranch director Bob Pallas, this new festival, a juried exhibition devoted to representational painting, showcases some 300 works by 42 artists to raise funds for the Napa Land Trust, of which Connolly Ranch is a unique part.

“Leadership Napa Valley did a feasibility study and concluded that the valley could support an art festival,” Pallas explains. “The Auction Napa Valley used to include artwork but they decided to focus more on the wine, and that left a hole. The Napa Valley Land Trust always includes art in its auction and they let me curate it last year. We netted $22,000 as opposed to the usual amount, around $9,000.”

Pallas chuckles. “I thought to myself, I’m on to something with this kind of art.”

“This kind of art” is specifically pictures of things. Pallas went to Sonoma’s Keith Wicks, the founder of the weeklong Sonoma Plein Air festival, to get advice and direction. Using Wicks’ list and placing calls for entries in national magazines, Pallas received over 110 submissions for the 42 spots he had available, including interest from artists as far away as Massachusetts and Hawaii. Juried by Jean Stern, executive director of the Irvine Museum, Peter Trippi, editor of Fine Art Connoisseur magazine, and artist Kevin Macpherson, the festival has set standards so high that even Pallas’ wife, painter Kristine Pallas, had to submit through official channels. “She got in,” he says with a relieved laugh. “Imagine if she hadn’t!”

Every year, thousands of fans from the North Bay and beyond flock to the hills, ranches, forests and meadows of California for some of the largest festivals in the state. These ain’t no casual, drop-in-and-see-the-headliner shows; you gotta be dedicated to camp out for days on end at these suckers. The payoff is an experience like no other among the most beautiful surroundings Northern California has to offer.

After an ugly legal battle too long to accurately get into here, the long-running Reggae on the River festival has become Reggae Rising (Aug. 1&–3), a name change that caused rumor and confusion last year for many fans. But everything about the booking seems to be the same. New upstarts like Collie Buddz alongside veterans like Don Carlos and Julian Marley; Sizzla (pictured) continues his festival rounds; UB40’s in the mix for some reason; and be sure to catch Gentleman, the unlikely German reggae singer who sings in patois.

The magic of the Kate Wolf Festival (June 27&–29) is in the deterioration of the wall between performer and audience; one might swap songs with Greg Brown around the fire, one might light one up with Jackson Browne late at night. Because the festival exists to honor Kate Wolf, there’s a shared spirit of camaraderie, but the booking, always inspired, is the real reason to attend. This year boasts newcomers Los Lobos and Ani DiFranco alongside crowd favorites Greg Brown, David Lindley, John Gorka, the Wailin’ Jennys and the Waifs.

The Sierra Nevada World Music Festival (June 20&–22)lays it heavy on the reggae every year at the Mendocino County Fairgrounds in Boonville, prompting the need for a Rastafarian-Boontling anthem called, say, “I Onna Bucky Walter to Jah.” Strangely, no one has stepped up to the plate. Morgan Heritage, Buju Banton, Midnite and the Wailing Souls top the reggae side this year, while California residents the English Beat, Markus James and perennial favorite Michael Franti round out the “world” side. www.snwmf.com.

Though it’s less likely to attract beanies and spliffs, the Mendocino Music Festival (July 12&–26) has been running for over 20 years bringing classical and folk music to the coastal town. Set in a tent overlooking the Pacific Ocean, this year’s festival features the Hot Club of San Francisco, Jesse Winchester, The Marriage of Figaro and much more. Of special note is “Degenerate Music,” a revue of post&–WW I Jewish music filled with doom and banished from Germany by Hitler. www.mendocinomusic.com.

Fun times in the summertime!