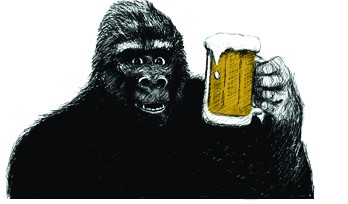 Rohnert Park's Beercraft pours the good, the rare and the unfiltered

The craft-beer category is big, fast and out of control.

Witness this bottle of Lair of the Bear Russian imperial stout by Mammoth Brewing, a 9.5-er, which snags my eye from the shelves of Beercraft, a craft-beer shop with a gorilla of a logo that’s wedged between a dive shop and a performance motorcycle shop—Mammoth Motorsports—on Commerce Boulevard facing fast-moving freeway traffic in Rohnert Park. Screen-printed on a bottle of Lair of the Bear, text says it’s aged in “Heavenly Hills” bourbon barrels. That’s a small typo; the label meant to say “Heaven Hills,” as in Kentucky’s famed Heaven Hills distillery.

In February, Beercraft opened a tap room featuring a rotating selection of 12 kegs. Co-owner JT Fenn has to keep alert if he wants to offer the latest and the hoppiest. These days, says Fenn, when distributors call him to offer a limited-release beer, the offer might stand for as few as the next 20 minutes.

The rest, he picks up on out-of-market road trips. Recently, Fenn picked up a Battle of the Brews winning beer from north of Chico; then, since he was more or less in the area, he swung by Arcata’s Redwood Curtain Brewing. Brothers JT and Matt Fenn choose which beers to sell, by tasting them in some cases; by rarity and “gut feeling” in many others. The craft-brew scene is, needless to say, a fluid situation.

There’s no TV in the taproom, just streaming music—’80s hits not guaranteed. The decor is late-20th-century rec room, with beer signs accenting the French-blue walls. “We’re not deep-pockets guys!” says Fenn, pointing out the rustic, $100 bar. And they pass the savings on: Goldfish crackers are free. It’s pretty low-key on a Tuesday evening, but Fridays can be standing-room-only, regulars attest.

Smooth and agreeable, HenHouse Oyster stout is accented with a light, briny aroma. Later this year, look for Beercraft’s own imperial stout that they’re crafting with Woodfour Brewing. It’ll be aged in used rum barrels, maybe bourbon barrels, too. After drinking the Lair of the Bear imperial stout, I just can’t hang on to the details.