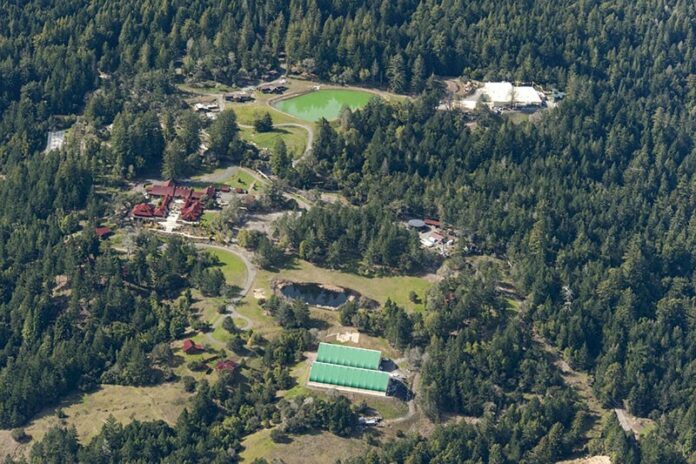 The mission to repopulate the world of Tibetan Buddhist texts begins, in a way, in Cazadero.

The Yeshe De Tibetan Text Preservation Project is a nonprofit organization dedicated to bringing back sacred texts destroyed by the Chinese takeover of Tibet in 1951. In this modern world, that requires a printing press and major distribution—and there’s the problem, at least for one resident.

“We do not oppose Dharma [Publishing’s] mission; we think it’s a fine thing that they’re doing,” says Cazadero resident Mike Singer. “What we do oppose is where they’re doing the mission.” The 120-acre spiritual retreat, located 10 miles north of Fort Ross, is not the right place for a printing press, he says, because the rural roads aren’t meant to handle shipping trucks making two trips per day.

When Dharma Publishing was awarded a use permit in 2012 to operate at a spiritual retreat center in the hills of Cazadero, Singer filed an appeal. He says the county’s general plan does not allow for such large printing presses in this instance, and lists several violations of the municipal code. The Sonoma County Board of Supervisors met Tuesday to discuss the appeal. (The outcome is available at Bohemian.com.)

Under a conditional use permit issued in 2004, Dharma Publishing was allowed to operate an 18,000-square-foot printing press as an ancillary operation to Ratna Ling, a Buddhist retreat center (both fall under the umbrella of Tibetan Nyingma Institute in Berkeley). Singer claims Ratna Ling has been in violation of its use permit since 2007, when the printing operation tripled its output with new equipment and more workers.

“Our main concern is they relocated a major industrial press into an RRD [resource and rural development] zone,” says Singer.

One reason for the move is the proximity to Ratna Ling. Volunteers living at the retreat can work at the press through a work-study program. It’s essentially free labor in a trade-style agreement.

“We negotiated with them four or five times,” Singer says. “They said, ‘We have to make it clear here: the printing operations will never be on the table for discussion.’ They don’t give reasons.”

The Sonoma County Board of Zoning Adjustment recommended approval in 2012. Singer’s complaints were not discussed at that meeting because the board lost the notes of its field inspection. He has since resubmitted them.

A March 19 memo from Sonoma County Building and Safety Division manager Ben Neuman, explains that most of Singer’s complaints have been addressed by the applicant. But one condition of the use permit states that a commercial printing press is not allowed. Books, prayer wheels and sacred art are produced at the press and sold at the Nyingma Institute’s large bookstore in Berkeley, as well as online at retailers like Amazon. Depending on the final decision on Tuesday, “If sales and advertisement are prohibited, then this issue would become a violation,” Neuman writes.

The operation is not visible or audible from the road, says Singer. But it’s not just about the local residents. “It affects all the residents in Sonoma County because it sets a precedent,” he says.

Calls to Dharma Publishing were referred to their legal counsel, who did not return phone calls. County supervisors Efren Carrillo and Shirlee Zane declined to comment on the case before Tuesday afternoon’s hearing.

UPDATE:
After a 6 1/2-hour hearing Tuesday afternoon, the Sonoma County Board of Supervisors rejected an appeal to limit Dharma Publishing’s expansion. Most people in the packed room spoke in favor of the press. The 3-2 vote (Shirlee Zane and Susan Gorin voted in favor of the appeal) also allowed the construction of a five-bedroom guest house on the site, made temporary book storage permanent and changed the limit from number of books produced to limit on truck traffic.