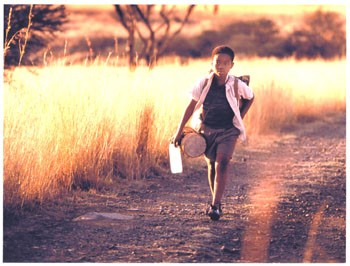 Musa’s Beanstalk: In ‘Beat the Drum’–part of the MVFF’s focus on African films–Musa, played by Junior Singo, journeys to the city to buy a cow.

Over the last 26 years, fans of the Mill Valley Film Festival have come to expect a vast cinematic salad bar, an eclectic menu of tasty films from which to choose. They want films from other corners of the earth, but they also want star power, new releases featuring major names.

Attendees will also want to do a bit of movie-star mingling, so this year’s festival will include in-person appearances by Lili Taylor, Sam Elliot, Stanley Tucci, Katie Holmes, and Peter Coyote.

And of course, there will be plenty of foreign films, cinematic treats imported from a total of 34 countries. This time out, in an important “special focus” event–call it a festival within the festival–the MVFF has packed the dessert cart with films from the world’s second largest continent. Titled “Cinema Africa! A Continent of Film,” the series is a sampler of intriguing films from South Africa, Tunisia, Rwanda, Kenya, Senegal, Burkina Faso, Cameroon, and Benin.

“African films and African filmmakers have, over the years, become a staple part of our festival,” says MVFF programmer Zoe Elton. “This year we wanted to put specific focus on those films, so we’ve brought in a wide array of films from across the continent of Africa.”

Many of this year’s featured films were discovered by Elton while on a trip to Africa. “There’s nothing like the experience of watching an African film in Africa,” she says, “stepping out of the theater into 120 degree heat, seeing vultures on the roof of the hotel and women in the streets selling strawberries and little boys selling postcards, and the smell of food cooking all around. That’s the way to see an African film.”

While Elton and company will not attempt to replicate Africa’s heat and spicy aromas in downtown Mill Valley, there will be plenty of African spirit onhand as many of the filmmakers will be in attendance, and a number of special musical events (including Friday’s World Beat Music Night) are planned throughout the festival.

The films themselves feature a number of stunning standouts, including wrenching dramas like 100 Days, a harrowing re-creation of the Rwandan genocide, shown from the point of view of a pair of young lovers. Filmgoers will find a few delightful documentaries, such as South Africa’s time capsule treasure Sophiatown, a rich, musical-filled remembrance of a remarkable township that in the ’40s and ’50s was a thriving cultural hub filled with singers, poets, and gangsters.

The festival even has a couple of (relatively) lighthearted thrillers: Senegal’s colorful, painterly Madame Brouette, a musical of sorts, about a beautiful shantytown peddler who may or may not have killed her husband, and Tunisia’s unexpectedly sexy Bedwin Hacker, in which a resourceful young woman baffles the authorities with her revolutionary computer pranks.

Mill Valley is a noncompetitive festival, but there is one film in the African exhibition which stands an excellent chance of attracting some Academy Award attention. It is director David Hickson’s beautiful South African fable, Beat the Drum. A little cinematic miracle, the sumptuously photographed film pulls off an unlikely feat in telling a warmhearted, uplifting, unabashedly hopeful story with a potentially dreary subject: the South African AIDS epidemic.

Beat the Drum–which will have its world premiere at the festival when it screens Oct. 10 and Oct. 12–follows a young boy named Musa (Junior Singo, an engaging newcomer) whose mother has died from the mysterious illness that is devastating the land. When his grandmother’s cow is sacrificed, with no success, to save his stricken father, Musa sets out in classic fairy-tale fashion for the big city of Johannesburg to raise the money for a new cow.

Along the way, Musa meets a gruff but softhearted truck driver whose own actions might have brought the illness into his family, and a tough, young street girl, who befriends the newcomer but cannot convince him to take up purse-snatching. Instead, Musa sets out to earn the cow money by washing car windows in the streets. While the subject of AIDS runs right through the story, it is Musa’s remarkable personal journey that forms the film’s warm, emotional core.

“That was my first thought when I was given the script,” says David Hickson, contacted in South Africa at the end of a long day working on a television game show (he’s the director of the South African version of Weakest Link). “The whole issue of people suffering from AIDS is a very overworked issue in South Africa,” he says, “so our great challenge was to concentrate on the emotions of the characters, rather than to be at all preachy. We had to constantly avoid anything that felt as if it was too obvious, and rather turn things into an emotional experience.”

He succeeded. That said, as well-written and lyrically filmed as Beat the Drum is, the clear key to the film’s success is the performance of Junior Singo, whose smile alone is worth the price of admission.

“What was most important was that in this film, you’d end up following the journey of Musa,” explains Hickson. “The tragedy of AIDS in this culture is a very hard thing to express. We wanted to show that tragedy through the eyes of this remarkable little boy, lessening the seriousness of the story, without losing any of the emotion.

“Junior has the most beautiful face to film,” he continues, “and the most beautiful, natural way of expressing things. He was extremely dedicated. Whenever he’d show up on the set to do a difficult scene, he’d arrive having spent the night thinking about the emotions he was about to play. He was a real treat to work with. The cast and crew loved him.”

Hickson, who will be traveling to California for the festival, says he’s glad his film is premiering as part of a celebration of African films.

“More than anything else,” he says, “I believe that people watching African films will come to realize that Africa isn’t simply a tourist destination, a place where wild animals roam. The human issues, the stories being told in these films, are universal stories, about hope and endurance and human connections. I think the stories we are telling in Africa make an emotional connection that can be felt and understood by people worldwide.”

For the full roster of the films in the Mill Valley Film Festival, visit www.cafilm.org/nav0_3.html.