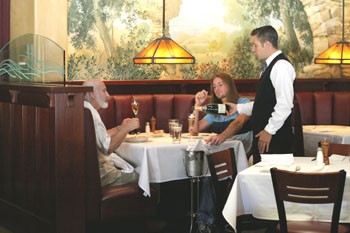 For years Calistoga was a dirt town (well, a mud town), an out-there host to spa-goers. But it has managed to parlay its mud-town status into happening nightspot status. On a recent swinging Saturday, well-heeled tourists ambled up and down Lincoln Avenue as young gangsta types cruised in their cars, blasting hip-hop. Some cover band’s butt-rock flirtation with the Rolling Stones blared out of a jam-packed bar, and local kids hung out in packs, leaning against light posts and claiming benches for their own.

Here’s an interesting Calistoga tidbit (Calistogans among you, please forgive the aside, with which you are doubtlessly familiar): Once upon a time, an ambitious renegade Mormon guy named Sam Brannan went to California just as gold was discovered in them thar hills. He sold shovels to gold-mining ruffians for 20 bucks a pop and made a bundle.

Sam Brannan was in this saloon in a small settlement in between what is now Middletown and St. Helena, and was all excited by the moneymaking prospects of hot springs. “We’ll make this the Calistoga of Sarafornia!” he said tipsily, meaning instead to say “We’ll make this the Saratoga of California!”

And that’s how Calistoga got its name. Or so they say. Which has absolutely nothing to do with Brannan’s Grill, except that it’s in Calistoga and cleverly cops Brannan’s surname. In 1998, restaurateurs Mark Young and Ron Goldin opened Brannan’s. Their other venues include Checkers of Calistoga and Santa Rosa, as well as the Flatiron Grill, just down the street from Brannan’s. They’ve clearly got a corner on the casual-upscale eatery market in Calistoga.

Brannan’s is an impressive space. The building itself dates back to 1906 (one of Calistoga’s oldest), and the elaborate iron supports crisscrossing the Craftsman-style peaked, open ceiling date back to the building’s construction. The entire dining area has a high-class lodge appeal, with dark, exposed wood and a huge stone fireplace. The kitchen is open, but sunken a few feet and recessed so that it’s visual white noise more than a distracting feature.

It was one of the hottest days in the valley when we made it up to Calistoga, and the heat still hung in the evening air. Brannan’s opens up its huge windows to the street, so you not only get good air circulation but plenty of chances to peek at passers-by.

The climate called for beer, although Amie du Jour ordered a mandarin cosmopolitan ($8.50), a tricky concoction that went down all fruity but packed a dangerous punch. What with the skyrocketing popularity of fruit- and vanilla-infused vodkas, the world of girly cocktails will never be the same.

The fried calamari ($9) were nice and crispy from a cornmeal breading and not tough or rubbery at all, and they went great with our beers. The lemon aioli could have benefited from more lemon and garlic, though; it tasted more like fancy mayonnaise than anything else.

The California endive salad ($9) arrived very daintily plated, a small bundle of Belgian endive leaves fanned out and topped with a liberal crumbling of Pt. Reyes blue cheese. The promised candied walnuts were few and far between, however, and the vinaigrette tasted flaccid and watery.

Mr. Bir Toujours scored with the thick-cut pork loin ($18). The steamed Manilla clams, slices of chorizo, and smoky paprika-kissed garbanzo bean ragout were all fine and playfully Spanish, but the massive slab of pork loin is what stood out. Moist and flavorful all the way through, it had wisely been brined prior to searing.

In lieu of the very tempting brandade-crusted halibut ($21), I downscaled and tried one of the smaller plates, the sweet corn risotto ($13). Unfortunately, its leaden texture was not aided by the cavalcade of overpowering parmesan shavings that littered its surface and tended to drown out any corn flavor. Hopefully I searched for corn, but located only random tough kernels. The wilted pea tendrils and pancetta were unobtrusive, though perhaps not called for; a good corn risotto can stand on its own.

A highlight was the roasted Sonoma chicken ($17). Sometimes, when dining out, ordering the roasted chicken will land you literally half a chicken, which is just way too much for anyone who’s not a Sumo wrestler. Here, it was just a breast with part of the wing, frenched, making for a much more refined presentation.

Thankfully, the accompanying butternut squash risotto was much looser in texture than the corn risotto, though it could have stood the inclusion of more butternut squash. The walnut pesto tinted everything a lovely green and lent a bright flavor to the whole plate.

The slow-roasted salmon ($20), flaky and moist, turned into a festival of richness with its very nicely done horseradish beurre blanc, silky and mild (the horseradish was thankfully an underlying flavor, not the dominant one). The creamy potato purée melded yieldingly with the beurre blanc, and the earthy roasted beets on the side tied everything together.

Right around the time our entrées were cleared, the restaurant thinned out, but a particularly inebriated fellow at a nearby table became entertainingly rowdy. He reached impulsively across the table to grab glasses; he bellowed good-naturedly at their server; he theatrically poured chocolate sauce all over their ice cream–but the best part was when he fell, red-faced, backwards off the banquette and onto to floor.

Emboldened by the good spirits of our neighbor, we tried the desserts ($8 each) and found out we shouldn’t have. The strawberry cream tart had a runny, yogurtlike consistency that was too soupy to be hanging out in a tart shell, though it was rich with a good flavor.

The chestnut and pear tartlet looked impressive, with its phyllo-dough starburst on top, but the dessert itself failed to make much of an impression. The pear ice cream, however, was good. The candied chestnut garnish was rubbery and tasted stale. It’s perhaps too early in the season to be using chestnuts.

Throughout the night, our service was courteous but consistently a wee bit tardy in between check-ins. Overall, however, Brannan’s was a pleasant dining experience. The combinations of flavors were creative and well-thought-out, but it seemed the kitchen was only half trying in their execution. The desserts in particular struck as us overpriced for what we got.

Interestingly, Young and Goldin’s family of Left Coast restaurants is expecting another arrival: Latitude, which will occupy the former Rohnert Park visitor center and is expected to open this November. With their other outposts keeping the house packed, it will be fun to see what they have in store with the new space.