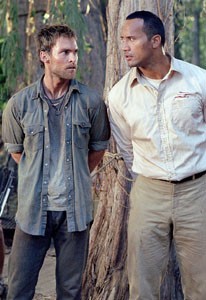 Jungle Love: Seann William Scott and the Rock take on the rebels in ‘The Rundown.’

Judging from the way Dick Bright and Jeremy Kramer laughed, shouted, and clapped their way though The Rundown, the new action-comedy starring the Rock and American Pie‘s Seann William Scott, one might have assumed they loved the movie. Apparently, laughing, shouting, and clapping is just their typical reaction to mediocre movies, because afterwards, neither would admit to liking the darn thing.

“It was fun, I guess, but kind of disappointing,” shrugs Bright.

I thought it was a major blast, a spirited buddy movie about a professional gun-phobic bounty hunter (the Rock) and the sneaky college dropout (Scott) he’s sent to haul back from the Amazonian jungles, where the kid’s been playing Indiana Jones without the permission of the local despot (Christopher Walken). There’s plenty of outlandish action, a couple of rousing stunts, and a hilarious Walken caustically babbling stuff about Tooth Fairies and Oompa Loompas. What’s not to like?

Still, professional funny guy Jeremy Kramer–the curmudgeonly, L.A.-based actor and standup is clad this evening in jeans and a black T-shirt bearing the words “Fuck Disneyland”–felt the movie lost its initial promise way too soon. Meanwhile, Bright, Kramer’s longtime pal and sometime collaborator–they’re currently working on a stage musical version of Russ Myers’ Beyond the Valley of the Dolls–was disturbed by the music composed for a big shootout near the end.

A professional Wacky Maestro of the legendary San Francisco party band Dick Bright’s SRO, Bright has a highly developed musical sensitivity, as evidenced by Little Roger and the Goosebumps’ delicate Gilligan’s Island/Stairway to Heaven, the litigious Dr. Demento hit for which he provided the string arrangements.

“It was kind of weird how the music got real religious when the Rock finally resorted to shooting people,” notes Bright, sipping red wine in a cafe near the theater. “The music suddenly got real big, with these big synth chords–aaaaa AAAAA aaaaa–when he picked up the guns.”

“But I have a another problem with the Rock in this movie,” Bright points out. I want to know why he was wearing a suit coat in the jungle.”

“That bothered you?” Kramer asks.

“It bothered me greatly,” says Bright.

“That didn’t bother me,” Kramer retorts. “The guy obviously thought he was going right back home. He thought the job would be easy-peasy-Japaneesy.”

I attempt to interject with a comment about buddy movies, but Bright cuts me off.

“Butch Cassidy and the Sundance Kid was a buddy movie, but not this,” agrees Kramer.

“Well,” I say in defense, “the definition of a buddy movie is two guys who start out on opposite sides, who are thrown together and end up liking and respecting each other. Like Charles Grodin and Robert DeNiro in that other bounty-hunter movie . . .”

“Well, let’s not get stuck on semantics,” Bright starts in.

“Uh, sure. Why not?” Bright says, taking a strong position.

“Hey!” Kramer shouts, changing the subject. “Remember that scene early on where the Rock and the American Pie guy started rolling down that hill, hitting rocks and trees and shit as they fell? I loved that! Part of me wanted that shit to keep going for the rest of the movie. Take 30 minutes to set up the characters, then have another 90 minutes of the two guys falling down the hill, smacking into stuff. Now, that’s a buddy movie!”

‘The Rundown’ is playing throughout the North Bay.