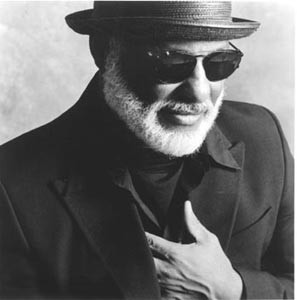 “Blues, which once was on the cutting edge of American music, has become as comfortable as an old chair now.”

THERE ARE many blues masters, but Mighty Mo Rodgers is one of the few who can lay claim to possessing a master’s degree in the blues. Indeed, a couple of years ago, when this 56-year-old singer, songwriter, and keyboardist–who appears this Sunday at the Russian River Blues Festival–first proposed earning a master’s degree in humanities for a study of the American musical idiom, the advisers at California State University at Dominguez Hills suggested that he submit a newly recorded solo album as his thesis. Rodgers–a former backup musician and record producer who can wax philosophical for hours about the ontological underpinnings of the blues–decided instead to write a thesis titled “Blues as Metaphysical Music.”

And then he turned the blues world on its collective ear. Last fall, Rodgers released his solo debut, Blues Is My Wailing Wall (Blue Thumb), financed by a $30,000 loan from his credit union and later picked up for international distribution by Universal, to rave reviews.

The album offers a refreshing, original take on an African-American music that has become formulaic. Billboard magazine opined that Rodgers is “a pungently gritty singer who pens tunes that work vigorous new wrinkles into the most timeworn of fashions. A revelation.”

The album earned Rodgers a nomination as New Artist of the Year at this year’s W.C. Handy Blues Awards, a prestigious national honor. While he didn’t walk away with the award, the ceremony gave Rodgers a chance to “meet and greet all of the blues police, as they say.”

Simply being nominated attests that he has made a mark on the blues establishment.

“I went into this to try and shake up the blues, to say something new and fresh,” says Rodgers, during an interview from his Los Angeles home. “I didn’t know if people would ‘get it,’ but the blues muse was pushing me to do it.

“I was shocked by the strength of the reviews. So I’m really flattered.”

Oddly, it’s been an uphill battle getting airplay on the few stations that still program blues music. “Some think the album is world beat,” he says, noting that while the album has garnered airplay on the East Coast, the largest blues station in the country, KLON in Los Angeles, is not playing Rodgers’ tracks.

“I’m not worried about it–that’s their problem, if they don’t hear these things.”

RODGERS conceived of the project, in part, as a way to show the hip-hop generation that the blues is still revolutionary. The concept album–which deals with the relationship of the blues and the heritage of slavery, the infamous Tuskegee syphilis experiment, the black community’s admiration of President Kennedy, and other more traditional blues themes–serves as a timeline that traces “this multifaceted thing we call the blues” from its African roots through its various rural and urban forms.

“I tried to tell the history of the blues as best as I could with 11 songs,” he says.

That Rodgers succeeded without any contrivance and free of clichés is a real wonder.

“That was my goal,” he says. “Blues has become cliché and very redundant in what I call The Blues. I mean, it’s hard to be original in any genre. Usually a genre will open up through some visionary who is iconoclastic and able to break down barriers. I’m not saying I am all of that, but I do have a vision and I know I see clearly. I was so bored and embarrassed with what I was hearing out there–the pedestrian and the maudlin.

“Blues, which once was on the cutting edge of American music, has become as comfortable as an old chair now. But if you listen to the fire and the power of a Robert Johnson or Elmore James or Muddy Waters, after 50 years it still comes off the record almost like it’s 3-D. People try to imitate that, but there can be only one Robert Johnson, one Elmore James. When these guys come along today and do the same thing over and over–the same songs even–it becomes boring and redundant.

“And that’s because most people in the genre are not too original.”

Rodgers is no mere academic–he has been immersed in the blues for more than 40 years, since he was a teen in East Chicago, Ind., where he heard such performers as Willie Dixon, Earl Hooker, and Jimmy Reed. After beginning his own performing career, Rodgers moved to California and became a session man and backup musician for T-Bone Walker, Bobby Blue Bland, Roy Brown, and others. In 1973, he produced blues duo Sonny Terry and Brownie McGhee’s album Sonny and Brownie (A&M).

But, in the mid-’70s, Rodgers grew fed up with the increasingly formulaic nature of the blues. He turned his back on the music business and devoted his attention to raising his son. Eventually, he enrolled at Cal State, Northridge, the first in his family to attend college. He resumed his songwriting, penning tunes for the Motown and Chappell labels. But he soon grew tired of that when they asked for more cliché-ridden compositions.

Last fall, Rodgers earned his master’s degree–a feat that has taken a back seat to his intense love affair with the blues.

“All the degrees in the world don’t mean shit–all the knowledge you now have pales compared to the powerful sound of a Sonny Terry or a Son House,” Rodgers says. “That power is primordial. It’s like looking at a Rothko painting–you know, the great abstract expressionist. There is heat coming out of it. It’s alive.

“And the blues is alive because it comes from God to deny the lie of our nothingness.”

Now he has set his sights on communicating that vision to a new generation in a new century. “There are a lot of young artists who are doing great things, blending the blues and hip-hop or whatever, so that the circle is complete,” he says. “I think that blues in its original form will always be there because that is the construct of the form that allows you to communicate through the call-and-response that originated in Africa with the maximum of communication and the minimum of redundancy.

“That’s basically the black voice, or as scholar Lewis Gabe says, ‘the blackened tongue.’ . . . But while its primordial voice came from black people who had lost everything, the blues has transcended that and become a world music. The blues is folk music that has gone around the world. I don’t care if you’re in Singapore or Stockton, you’re going to hear some Afro-American blues-centered music–R&B, hip-hop, rock ‘n’ roll.

“And that’s the real power of the blues–it’s ability to outrun its commodification.”

Sun, sand (or at least a lot of little pebbles), and sound abound at the annual Russian River Blues Festival on Saturday and Sunday, June 17 and 18, from 10 a.m. to 6 p.m. at Johnson’s Beach in Guerneville.