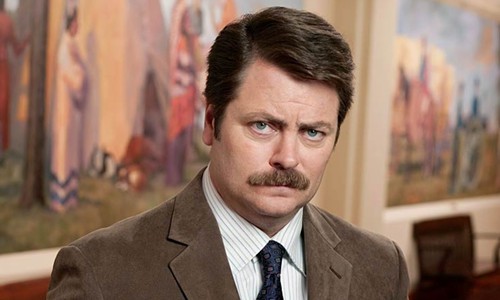 “Whoa, I think that was Nick Offerman,” said my friend. I didn’t see the guy, so I asked who that was, because I thought it might be a friend of a friend that I had maybe met once or something. I didn’t recognize the name because I’m used to hearing a different name in reference to the mustachioed man’s man: Ron Swanson, the character on TV’s Parks and Recreation. I don’t watch the show but am familiar with the character because I’m a young person with Internet access. But I didn’t believe my friend, anyway, because why would such a big star be getting a cup of coffee at Acre in Petaluma?

Turns out it was him, which we confirmed inside Chick-a-Boom Vintage Clothing when the clerk was even more excited to see Mr. Offerman than my friend was. Apparently he was in town promoting his book, and his wife wanted to do a bit of shopping (of course, this is third-hand store clerk knowledge, not an official news source like TMZ or anything). So I did what any reasonable person would do: tried on a tuxedo jacket and walked around the store, giving Mr. Offerman a respectful nod I caught his eye. My friend and I then left and walked around town some more, talking about how cool it was that we just “met” Nick Offerman. We are dorks.