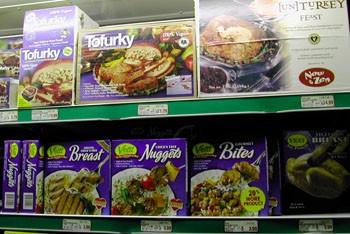 Beat the Meat: The shelves of Whole Foods in Sebastopol are bulging with faux meat products.

Among a new supermarket crop of meat replacements, the test is in the taste

You could be catty and say that a vegetarian eating meat substitute is like a monk having sex with a blow-up doll. Besides sharing the obvious implied ethical quandaries, both acts can also impart an aftertaste of plastic. But you could also be an optimist and note that the past few years’ proliferation of widely available meatless yet meatlike products points to a growing faction of vegetarians and quasi vegetarians who are increasingly aware of both their own health concerns and the huge environmental impact of raising meat.

Burger King offers a veggie burger (the BK Veggie), and McDonald’s has introduced a McVeggie Burger in Canadian markets. Large chain markets from Safeway to Whole Foods are devoting cases in their frozen sections and shelves to tofu dogs, Gardenburgers, and unpepperoni–which is great news for vegetarians who love junk food. But are these highly processed, highly packaged meat alternatives any more noble or healthful than their fleshy counterparts? And, just as importantly, do they taste good?

The proof, in this case, is in the protein, and that’s how the Fabulous Meat Substitute Tasting Party came about. While facing down a fake salmon fillet in the grocery store and wondering who eats this stuff and why, I decided that there was one very good way to find out: become the person who eats this stuff.

So I invited a fairly open-minded crowd of devout vegetarians, curious omnivores, and certified meat lovers over one night for an intimate soiree starring a spread of brand-name soy, gluten, and other products, most of them of frozen origin. Items were served simply prepared according to package directions, unless they were recipe-ready products (such as ground beef replacements) that were not intended to be eaten plain, in which case they were whipped up into typical party grazing fodder.

It was all very unscientific. Products were identified and labeled with brand names very clearly for all to see, so everyone knew exactly what they were eating. Testers filled out comment cards which were then submitted with utter anonymity into a tightly sealed cardboard box with a slot cut into the top. The following is what those cards read. Sometimes it’s pretty, and sometimes it’s not. Here’s the straight beef . . . er, soy.

A mixed response, from “almost edible” to “I could munch a whole pack of this stuff easily, accompanied by some Coke and a Lifetime movie.” Most tasters noticed its visual and textural similarity to bologna. “Doesn’t not remind me of salami–would enjoy more on a sandwich,” said one. In general, not loved but not hated.

Since it’s pretty uncommon to serve naked sausage patties as finger food, Gimme Lean! Sausage Style (which comes packaged in a tube, like bulk sausage or cookie dough) traveled in the guise of that lowbrow cocktail-party classic, sausage and cheese balls. Because Gimme Lean! is fat-free, some found it to be “not so heavy–tastes better than real sausage.” But others disliked its texture, calling it “slimy” and “like eating glue.” Consensus on flavor was divided. Half praised its “sausagelike flavor,” though one claimed it “tries to compensate for lack of tasty grease with insane amount of sage. It’s not working.” Most agreed that sausage- cheese balls were perhaps not the ideal vehicle for Gimme Lean!

“A bit chalky but bearable” and “nongreasy, but a bit dry . . . sorta bland.” “Like fast food that’s good for you,” quipped one skeptic. A few liked these for just that reason, though: “Like you’re at McDonald’s minus the clown guy with the big red shoes.” An interesting footnote: Morningstar products are manufactured by Kellogg.

The hit of the evening, these were gone in a flash. All but one taster commended Quorn’s texture as “juicy, almost real,” “lifelike, delightful,” and “amazingly moist, like a hunk of chicken breast.” “I could eat these all night . . . nice, deep-fried sort of unhealthy thing going,” raved one. “Reminds me of fish sticks,” said the lone dissenter.

Hated as much as Quorn was loved. “Too dry” and “yucky . . . tasty cardboard” say it all. “Just the creepy name is off-putting, and besides, these look like cat turds.” “Nothing good as Quorn things,” lamented one.

This “new alternative to salmon” provoked lots of curiosity, mostly because of its bright pink shade and odd shape (“looks like an old shoe”). No one really liked this, but we were all impressed that it was edible in the first place. “Slightly spongy and chewy” and “wasn’t half bad” were this product’s greatest compliments. “Like super-low-grade salmon.”

This came in a plastic tray that looked like a chicken-shaped jello mold. “I feel like I’m eating a Fisher-Price toy,” said one. A lot of people skipped this “chewy, synthetic, bland piece of poo-poo” altogether, though someone felt it would be nice to “use in any chicken dish.”

Served as minced “chicken” in lettuce cups, this went over pretty well: “reasonable texture,” “a bit mushy, one of the better tasting substitutes,” and “more like ground beef.” An enthusiastic fan cheered, “This is the hottest thing since sunburn.” “Seitan is way better when it’s deep-fried,” said another taster, “but then again, what isn’t?”

By the time we got to the veggie dogs, everyone was too full to continue. Overall, everyone’s expectations did not seem to be met, although some of the products we tried would be good in small doses, as part of a meal or well-disguised as a component in something like stew or lasagna. An entire buffet of fake meat is pushing it.

Meat substitutes can be convincing and can, in capable hands, be very tasty. But what’s wrong with just sticking to eggplant, for instance, which tastes like eggplant because it is eggplant? In our rushed society, vegetarians are not exempt from needing to put meals together in a hurry, and, like every good American citizen, vegetarians are indeed entitled to enjoy the giddy, guilty pleasures of junk-food indulgence.

But there are many low-cost, hearty, high-protein foods (tofu, legumes, nuts, and grains) that are meatless by nature. Perhaps the best meat alternative of all is to factor more of those into our diets. Anyone who’s had that “salmon” thing before will probably agree.

Thanks to all of the people who took part in the Fabulous Meat Substitute Tasting Party.

Yes, Quorn–the “mushroom-based” newcomer to the U.S. meat-replacement market–does taste pretty good. Marlow Foods, a division of the pharmaceutical company AstraZeneca, makes Quorn, which they claim is the “number one global retail brand for meat-free foods.”

But what the heck is Quorn, anyhow? Actually, it’s a fungus called Fusarium venenatum (Marlow Foods calls it “mycoprotein”) that was discovered in a British soil sample. The mycoprotein/fungus is grown in huge vats using a controlled fermentation process. Marlow Foods claims that “Quorn foods are made from all-natural ingredients and are not produced using modern biotechnology.”

So even if it is a little creepy, Quorn sounds like an ideal product: tastes good, meatless, low environmental impact. Some groups, though, such as the Center for Science in the Public Interest, have concerns about Quorn’s labeling. They are asking the FDA to require Quorn to clearly disclose the product’s fungal origins on its packaging.

Another concern raised by the CSPI is that some of the novel proteins in the mycoprotein might cause allergic reactions. Severe vomiting and diarrhea have been reported by some who have eaten Quorn, both in Britain and the United States. For the time being, Quorn is on U.S. grocery store shelves, and it’s up to consumers to draw their own conclusions.