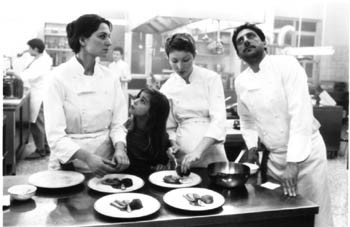 Chefs in the Movies

There’s a Hair in My Soup: Four people, four plates of food, and approximately 10 million hairs.

There’s a fine line between reality kitchens and movie kitchens

Mostly Martha is a charming if clichéd romantic comedy, and its only major drawback is the awful smooth jazz saxophone that dominates the score. The other problem is that not once in the movie does chef Martha ever wear a hat.

In fact, throughout the whole movie, none of the kitchen staff even dons anything approximating a hairnet. For all we know, Martha is sending out precisely plated, succulent roasted pigeons unintentionally garnished with stray human hairs.

Considering that hairs are a constant enemy in the food-service world, it’s disappointing to scan over some of the best-loved of so-called food movies–such as Big Night and Babette’s Feast–and notice that nary one cinematic chef bothers to restrain his or her hair. This is not only a bad example (hairs, besides being unsightly, transmit staphylococcus), but incredibly inaccurate.

Food movies, therefore, can never be truly faithful to the experience of slaving away in a kitchen, be it a first-class, white-tablecloth establishment or a fast-food drive-in.

First, there’s the inconsistency of real time vs. movie time. In Big Night, two brothers prepare a detailed feast for bandleader Louie Prima in what appears to be one afternoon. One of the brothers even has time to test-drive a Cadillac and screw the wife of a rival restaurateur.

So in a matter of hours, three people churn out multiple pounds of fresh pasta, two timpano, three kinds of risotto, a roast suckling pig, soup, salmon, a few salads, and some crostini for good measure. Big Night probably communicates a devoted chef’s conflict between art and commerce better than any other movie–so much so, in fact, that you don’t notice its characters performing superhuman feats that challenge the space-time continuum.

Most real chefs don’t have time for real lives. A movie calls for a certain amount of action and plot development, requiring a bit of cheating when it comes to spare time. In reality, Big Night‘s Stanley Tucci and Isabella Rossellini (well, their characters, at least) would not have had time for sex, but the movie was richer for that twist.

Some critics regard food movies with an eyeball-rolling hostility, as if the entire genre is guilty of compensating for flaccid plots with a parade of sumptuously shot gastroporn. This is only sometimes the case, but it does bring up the interesting point of films fetishizing food rather than revering it.

What’s more interesting is that food movies of late have been fetishizing the chefs as well as the food, probably because chefs have risen in the public eye from working-class servants to alluring shamans and showpeople with the powers, via their Food Network show, to captivate with a mere flip of the sauté pan.

You know that chefs are bona fide cash-in material when you hear that the ol’ Fight Club team of Brad Pitt and gritty-slick director David Fincher are again joining up on a fictionalized adaptation of chef, Food Network personality, and bestselling writer Anthony Bourdain’s exposé, Kitchen Confidential. The movie version is tentatively titled Seared.

Seared‘s setup runs like an exaggeration of The New Yorker‘s recent Mario Batali profile: 30-year-old Luke Casdin is the executive chef at Horatio, Manhattan’s restaurant of the moment. New York City restaurants have the teeniest, tiniest kitchens in the entire world, and I wonder if Seared is going to be true to this–a claustrophobic kitchen version of Das Boot, which would be very David Fincher.

Casdin leads a life of hard-driving, flamboyant excess, like a young Iggy Pop but with better taste in food and fewer venereal diseases. Being young and played by Brad Pitt, Casdin is still hunky and virile enough to be balling a 17-year-old artist and a foxy, well-respected, middle-aged restaurant critic.

Maybe this sort of thing could really happen, though I’d like to think both restaurant critics and chefs have more noble ethics than that. It’s not too far-fetched a plot, perhaps. Cooks have always been a motley bunch, as Mötley as the Crüe. If Tommy Lee were a groundbreaking chef, I’m sure he’d behave the same way.

When did chefs’ thrilling yet tedious lives become so glamorous? Being a chef is a profession of antiglamour: You never see the light of day, you spend all of your time sweating away in a ridiculous outfit, and the physical and mental demand wear down your resistance, making drug, alcohol, and tobacco abuse a common thing–just like among rock stars. No wonder chefs garner little foodie groupies.

It would be refreshing for Hollywood to tackle a more enduring, less MTV’d chef movie, like a biopic of Ferdinand Point, a (literally) larger-than-life figure in 20th-century French gastronomy who tipped the scales at some 300 pounds. Point ran La Pyramide in Vienne, France, and legend has it that he commenced each day with a ritual shave out of doors, two roast chickens, and a magnum of Dom Perignon.

La Pyramide is still around today; Point, however, given his lust for (and generous intake of) life, died at 57. He’d go to bed in the wee hours of the morning, and, expectant for Dom Perignon and roast chicken, arise bright and early a few hours later at 4:30am.

Ferdinand Point’s life is fascinating but unfilmable; there seems to be a shortage of bankable 300-pound leading men, and Marlon Brando just does not seem right for the part. It’s also doubtful that a Miramax budget would have space for funding a Nutty Professor-type cosmetic transformation. For Eddie Murphy, yes; for a chef movie, no.

A chef with some personal bulk can be sexy, but it is tough for a camera to sex up a man whose frame overextends the lens. And chef movies, being movies for cultured adult foodies, must be sensual and therefore sexy.

Seared may, in fact, function as a hopped-up portrait of Point’s present-day culinary disciples. Point was one of the first chefs to bridge the gap between kitchen and dining room. He’d venture out into the front of the house and chat with his guests to deepen the connection between chef and diner, so that La Pyramide’s food could be as close to individual perfection as possible.

Celebrity chefs are now making out-of-kitchen appearances in spades–you can’t be a celebrity chef without leaving the kitchen–and those awed stares at the mysterious figure in white (“There’s the chef!”) bring with them a buzz that’s as lucrative as the power of pleasing the palate.

The allure of chefs is so powerful, in fact, that it’s drawn in Brad Pitt, who in Seared will hopefully at least bother to cover his hair.