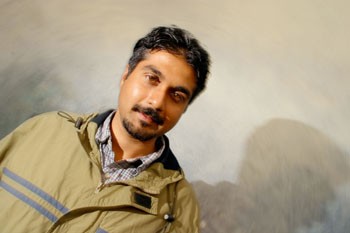 All Tomorrow’s Poets: Pranzal Tiwari, third-place winner in the Jaffe Memorial Poetry Contest, is encouraged by the honor.

Remember how it was? For a while there, poetry was sizzling like an egg dropped on Georgia asphalt. Never mind the quiet classroom, the secluded garret, or the dusty bookshelf. Sick of being scorned or ignored, the maiden aunt of literature kicked off her sensible shoes, put on her red dress, and ran down to join the party. All of a sudden, poetry was cool, poetry made money, poetry could change your life.

And it wasn’t just middle-aged intellectuals like Bill Moyers fooling with words. Everybody from hip-hop kids and poetry slam scenesters to indie filmmakers and pop musicians got in on the act.

Cultural moods are a tricky thing to gauge, but that moment of poetic euphoria seems over now, gone the way of the Clinton economy. “A day! Help! Help! Another day!” Emily Dickinson once wrote, and in these darker days, poetry slams are disappearing faster than 401K plans, while poor Bill Moyers is more concerned with avoiding DUI charges than freeing verse from the bony clutches of the ivory tower.

But poetry’s revolutionary impulse lives on. After all, poets and their supporters are a famously tenacious lot, particularly on the local level. Case in point: the Dan Jaffe Memorial Poetry Contest, an ambitious attempt by friends of the recently deceased co-owner of Copperfield’s Books to entice the next wave of talented local poets into stepping forward and unveiling their work.

Hefty cash prizes were handed out to three winners in the contest, which was open to all Sonoma County poets under the age of 35. “The idea was not to give money to a great poet, but to encourage beginners to make poetry,” explains organizer Laura Reichek, a longtime friend of Jaffe, who died of heart problems in March.

The results of the contest are in and the winning poems have been up in the window of the Petaluma Copperfield’s store for several weeks now. But the real climax of the affair comes on Sept. 22, when the winning poets give the first public reading of their work during the Petaluma Poetry Walk, a seven-year-old event that offers a day’s worth of readings by dozens of poets at a host of downtown venues.

The contest’s age limit sprang in part from Jaffe’s deep interest in seeing beginners get involved in the arts and social issues. “He was very interested in young people,” Reichek explains. “He really thought that if there was any hope of creating a humane society, the focus had to be on the young.”

Younger poets need every drop of encouragement they can get, according to former Sonoma County Poet Laureate Don Emblen, who teamed up with local poet Terry Ehret and Petaluma Poetry Walk organizer Geri Digiorno to judge the contest. Poetry, Emblen says, is the last thing many young people are thinking about.

“For a kid looking at our society and watching TV, he sees dollar signs all over the place,” says the 83-year-old Emblen. “And poetry isn’t a money-making proposition. Why should they fool around with poetry or music or art or anything else that doesn’t make a lot of cash?”

The desire may be lacking, but the basic tools for making poetry are more common than ever. Robert Hass, the former U.S. poet laureate, has noted that there are more literate people in Kansas City today than there were in Shakespeare’s London. “There’s no reason every American city should not produce a writer of great interest to the rest of us,” Hass wrote in the introduction to The Best American Poetry 2001.

That makes the number of valid entries to the Jaffe contest seem disappointingly low: a mere 36 poems competed for $1,000 in prize money. But Emblen is heartened by the fact that the winners demonstrate a promising degree of talent.

The contest attracted work in a wide range of styles, skill levels, and subjects. There are plenty of good poems that didn’t win, and a few others that make a casual reader pity the judges. There is a three-page poem about racism. There is a four-line ode to curly fries. There is an excellent poem about a poet biking across town to buy a burrito with his last two dollars.

“The quality of the entries ranged from zero to 10, as is usually the case in contests,” Emblen says. “But all three of the winners had something interesting to say, and they all exhibited a real skill in handling the language and making what they had to say come forward without holding up a sign.”

First place winner Brent Hagen of Santa Rosa chose domestic discontent in fairy-tale land for the subject of “A Few Things.” Humor is the guiding principle here: “Snow White sighed at the stack / of stew-stained dishes. / ‘The little bastards,’ she muttered.”

“Industrial laundry/dahlia”–which won third place in the contest–was composed by 22-year-old Petaluma writer Pranzal Tiwari while he was in the midst of working with United Students Against Sweatshops to support workers striking against a laundry in Philadelphia.

“The only person I’ve really told about winning the contest is my girlfriend, because I’m really shy about this stuff,” Tiwari explains. “But I’m definitely motivated to write more poetry now that I see that people will actually read it.”

Santa Rosa poet Cynthia McCabe, who scored second place with “Coming Home,” says the experience has been a big ego boast. “It gave me a little more hope,” she says. “I write poetry for myself, and I hadn’t really thought that anyone would appreciate it other than myself and my select audience.”

The 31-year-old McCabe regularly attended the monthly poetry slam at the Luther Burbank Center. That event is now defunct, and McCabe says she has noticed what she calls “a bit of a recession” in poetry circles. That downturn, she says, is only natural in a society that habitually relegates poetry to the margins.

As a child, McCabe often fell asleep to the clacking sounds of her mother writing poetry on the typewriter. She regrets that not everyone gets that kind of early exposure to the art form. “I think that maybe poetry is somewhat daunting to people,” McCabe says. “It’s not taught as something that’s fun in school. People don’t read pulp poetry the same way they read pulp fiction. It’s not usually up at the supermarket counter along with the thrillers.”

What does the contest reveal about young Sonoma County poets? Among other things, Emblen says it confirms something that he’s seen before when working with younger poets–and noticed in looking back over his own work from younger days.

This contest is far from the only chance Emblen has to work with younger poets. He has become famous in local literary circles for running the Clamshell Press, which prints attractive broadsides featuring work by talented poets of all ages, including many young poets who have never before been in print.

But those broadsides are no substitute for a significant poetry journal, and Emblen argues that’s what Sonoma County needs if it really wants to encourage young poets. “I think the biggest obstacle they face is lack of recognition,” Emblen says. “Young poets find it hard to be recognized in any way. Yet some of the best ones I know just go on writing anyhow.”

History underscores that point. Whitman was first published at the age of 36. Robert Frost had to wait until he was nearly 40. And Sylvia Plath bitterly lamented the long delay in finding any outlet for her work.

Ultimately, that may be the most important lesson for young poets laboring in a society that only sporadically gives a damn about their work. Don Emblen puts it this way: “They look around and they don’t see a lot of people very excited about poetry,” he says. “And neither do I.

The seventh annual Petaluma Poetry Walk takes place on Sunday, Sept. 22, at various venues in downtown Petaluma, including Copperfield’s Books and the Apple Box. The winners of the Dan Jaffe Memorial Poetry Contest will read at 4pm at Copperfield’s Book, 140 Kentucky St., Petaluma. For details, call 707.763.4271.