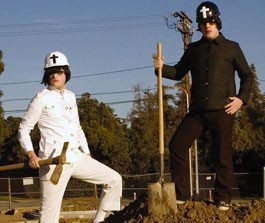 Publicists should take lessons from the Rapture Right. In lieu of the humdrum press release, branded tchotchkes or complimentary tickets, the purportedly hardcore, right-wing Christian duo simply threaten a boycott. Responses from the media run the gamut from “Huh?” to bona fide alarm and even the occasional 700-word column in an alternative news weekly.

The Rapture Right represent the vanguard of contemporary ultra-conservative religious activism. Their public-relations arsenal brims with all order of contemporary messaging tools, from social-media profiles and educational videos on their website TheRaptureRight.com to original music and forays into public protest. Of course, their penchant for pedantry and relentless religiosity keeps the ranks small. Their total headcount numbers two—just enough to enjoy one of the more elaborate inside jokes to be conceived, immaculately or otherwise, in Sonoma County.

As the Rapture Right, the doctrinaire duo Timothy and Trevor Christian position themselves, among other things, as “a hardcore Christian electro-goth band that has been writing music for God through God for God to listen to for the past couple of years.” Doff the pageboy do’s and pancake makeup, and they’re Glen Stewart and Daniel Walker, respectively, whose métier is an arresting hybrid of performance art, activism and satire that raises eyebrows—and sometimes fists.

Like their corporate counterparts the Yes Men, the Rapture Right deconstruct the codifications of a particular social paradigm to both edify and entertain. Like magicians or con men—and the most convincing performers are often both—the Rapture Right have also honed the art of misdirection.

Their joke isn’t necessarily on the conventional God-fearing folk to whom the Rapture Right might represent some kind of dyed-black apotheosis. Rather, their targets are the comparatively silent voices in the religious debate—the agnostics and atheists—whose activism often begins and ends with a “Co-Exist” bumper-sticker on their car.

In the past decade, there have been a few occasions in which secular interests mustered effective commentary in comedy, the most successful example being Bobby Henderson’s “Pastafarian” Flying Spaghetti Monster. Later, Bill Maher made waves with his pro-secular documentary Religulous (naturally, the Rapture Right boycotted it and were featured on the film’s website after Stewart phoned its distributor and claimed to be covering the boycott for a local daily metro). What distinguishes these Virgin Mary pranksters is the personal peril they risk while confronting secular humanists, a group with which they both identify philosophically.

According to Stewart, real Christians tend to shy away from the Rapture Right. “They’re either afraid when they see it or they’re embarrassed when they see it, so they stay away altogether,” he says, adding that “90 percent of the people who email us are secular, yet they don’t get it, they didn’t see the satire and they’re just so mad. It’s nice to see that happen because it’s actually motivating them.”

Hear more about the Rapture Right and other topics on the Bohemian’s newest effort, ‘Arts I.D.,’ an audio magazine debuting Wednesday, June 30, at 7pm on KRCB, 91.1-FM. Boycott Daedalus Howell at