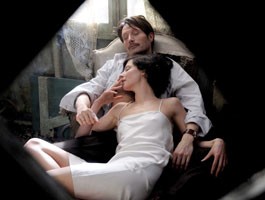 Coco, Igor and the Lost Generation

You might suspect a sequel from the title, but it’s just coincidence. Coco Chanel & Igor Stravinsky fits snugly into last year’s unrelated Coco Before Chanel by Anne Fontaine. This slightly fictionalized account of the torrid affair between the great maker of racket and the great fabricator of odors even repeats a shot from the Fontaine biopic, one of the best shots, in which the designer glides down a staircase past a multiply mirrored wall. The difference between the films is obvious. Chanel here is Anna Mouglalis, a knifelike, severe creature with one of those mouths that three-named novelists used to describe as looking like a scarlet wound.

The Chanel-Stravinsky love affair begins in Paris before World War I. Chanel’s lover, Boy, has gone elsewhere (his eventual fate is signaled by the harsh rattle of his car engine as he drives away). Alone, Chanel goes to the ballet, where she’s in attendance at a turning point for modernism, the debut of the Ballet Russes’ Rites of Spring.

It’s nice to know that something considered avant-garde in 1913 still looks way avant-garde nearly a century later. The dancers, clad in Greco-Assyrian outfits with crossed garters and tarboushes, do a variation on a Plains Indian war dance in front of a dazed audience of Parisians asking themselves, “Which one is Nijinsky?” Then the rioting starts.

Sympathizing with the fiasco, Chanel invites Stravinsky and his equally poor family—a quartet of kids, as well as the ailing Madame S.—into her silk-lined chateau.

Director Kounen waltzes the camera around the plush house as Stravinsky pounds the keyboard and Chanel draws the composer closer to her. But love isn’t her sole occupation; she’s also supervising the creation of her namesake perfume. This olfactory task is hampered by the smell of burning emanating from Stravinsky’s wife (Yelena Morozova). The unwell woman has an unfortunate resemblance to the aging Queen Elizabeth I; she’s redheaded, with a protuberant forehead.

The trance-inducing curlicues of the tracking camera hide the ultimate lack of pull—for a while. Ultimately, it’s the casting that sinks the film. Mikkelsen is a startling-looking man, and he resembles the master composer. But perhaps he plays it a little too correctly. His Stravinsky goes from bespectacled Dracula to—in the scenes of pouting with frustrated desire—a depressed duck.

The dialogue is cut to a minimum compared to the heavy languor of the lovers. And maybe Coco Chanel and Igor Stravinsky deserves points for not being a Ken Russell&–style farrago: the director has respect for its subjects, even if they are behaving badly.

From the art nouveau kaleidoscope titles to the ultimate nostril-flaring finish, Kounen presents a standard love triangle, rich-looking, spotless. Mikkelsen’s composer succumbs to the monochromatic allure of Chanel, as his wife patiently suffers. It’s all engrossing until it suddenly isn’t.