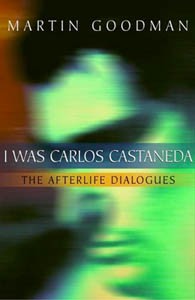 Has Carlos Castaneda risen from the dead? What do you think?

RISING FROM the grave has always been a good way to sell books. For instance, without the bit about Jesus’ resurrection, the New Testament might never have achieved the status of literary blockbuster.

Then again, it might have been a hit based on its mysticism alone. Simply peruse our last decade’s bestseller lists. Whenever an unknown writer claims to have encountered otherworldly beings (Mutant Message Down Under), ancient goat-footed Greek gods (Journey into Nature), or previously not-very-talkative Ultimate Entities (Conversations with God), the unknown writer stands a good chance of becoming a filthy, stinking millionaire.

Now, with the release of Martin Goodman’s I was Carlos Castaneda: The Afterlife Dialogues (Three Rivers Press; $12), it seems likely that a new bestseller will be joining the group. The slim work is a bold bit of spiritual “nonfiction” that goes for broke: not only does it describe a “true-life” encounter with an enigmatic mystical personage, but it chooses a person who just happens to have been dead for a few years.

That person is Carlos Castaneda, the reclusive author of that other bestselling metaphysical mind-bender: The Teachings of Don Juan, in which Castaneda evolved from a drug-dropping anthropologist into a camera-phobic sorcerer with memory problems.

Though he reportedly died of liver cancer on April 27, 1998, the infamously shy Castaneda, according to Goodman, decided to break his No Interviews rule about four months later, rising from the dead in the midst of a lightning storm near a small village in the French Pyrenees. He appeared to Goodman, a little-known writer with an interest in mystical oddities, who claims to have discovered Castaneda standing in front of a carved wooden crucifix of the pre-resurrected Christ (Get it? Get it?).

The meeting is, as one would expect, jarring. Castaneda knows Goodman’s name. He orders him around, launching into a bizarre interrogation laced with pointed put-downs. He follows Goodman home, eats the fish Goodman was planning for his own supper, then crashes on the poor writer’s couch. For the next few days, he subjects Goodman to an increasingly bizarre series of dialogues about death, life, and the true meaning of Jack and the Beanstalk.

Now, it’s upsetting enough when a dead guy shows up, uninvited, while you’re vacationing in France. But when the guy turns out to be such a contradictory, short-tempered, self-aggrandizing son of a bitch, you’d probably do what I’d do: call the cops.

Not Goodman. No doubt sensing a potential bookstore sensation, he merely follows the babbling psychopath around, suffering his endless insults, taking in his meaningless, riddling ravings like a hungry dog gobbling up leftover hamburgers.

If Goodman claimed that his account was metaphorical, a fanciful imagining of what might happen were Carlos Castaneda to appear, I might have (almost) enjoyed it, particularly the part where Castaneda grumpily suggests that the most potent weapon in the human arsenal is our ability to focus. What we focus on is what we get. It’s been said a thousand times, but it’s still a useful idea.

There are those who’ve had authentic spiritual experiences through meditation, hypnosis, or controlled substances. I can respect that. But there is little to respect in a writer who tries to sell the notion that his hallucinations are literal. Carlos Castaneda rose from the dead? Why? So one more book could make it to the shelves?