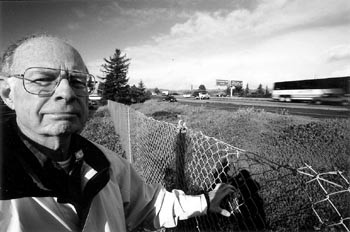 Transportation 101: “What’s happening in Marin is no certainty that they’re going to pass the tax measure,” says Sonoma County transit activist George Ellman, “but it’s hellishly more likely than a year ago.”

Are Marin conservationists ready to flatten the freeway tax?

COMMUTERS who regularly brave Highway 101 are no strangers to traffic snarls, gridlock-producing accidents, and horrendous delays. But these could pale in comparison to the potential tie-ups involved in the contentious dual-county transit plan that will go before voters in Marin and Sonoma counties.

Sonoma County residents tired of chronic commuter backups may envision positive changes on the horizon with the introduction of the $900 million transit plan engineered by Berkeley-based planning consultant Peter Calthorpe; it boasts additional lanes and a 53-mile light-rail passenger train system between Healdsburg and Larkspur, among other road improvements. If everything goes according to plan, those improvements will be funded at least partially by a local sales-tax increase.

Yet local commuters may have to contend with a major roadblock: Marin County conservationists.

“This is a huge decision on the future and the decision Marin makes will impact Sonoma County,” warns Hannah Creighton, a member of the Marin Transportation Steering Committee, and an environmentalist who, in this case, is on the committee to represent bus riders with the group Marin Advocates for Transit.

“In Sonoma County, the transit plans are being fought out as environmental vs. business issues, but in reality it’s more complex than that. There are a lot of social issues–affordable housing, access for the disabled, seniors needs–and a lack of representation by community groups [that have a vested interest in transit].

“There are all sorts of needs and demands that should be brought to the table.”

But George Ellman, co-chair of the Sonoma County Transportation Coalition, an alliance of environmental, business, and community leaders that have formally supported the Calthorpe plan and helped put it together, says he’s optimistic about the resolution of the transit issue. “I feel better about it now than I did six months ago,” he confides. “What’s happening in Marin is no certainty that they’re going to pass the tax measure, but it’s hellishly more likely than a year ago.”

Six months ago, the Sonoma County Board of Supervisors instructed the coalition to begin working on the wording of a local sales-tax ballot measure. The text of that initiative will be reviewed March 17 by the supes, who have until August to add it to the November ballot. They probably won’t act without the approval of the Sonoma County Transportation Authority, comprised of three supes and a representative from each municipality.

In neighboring Marin County, the 25-member Marin Transportation Steering Committee–which includes elected officials, environmentalists, business leaders, an educator, a housing advocate, and various other citizens–has had the tough task of crafting a widely accepted sales-tax measure to raise money for transportation improvements. At press time, the committee was scheduled to discuss the draft recommendation on Jan. 15.

But it’s been an uphill battle to win the broad-based support of everyone from environmental watchdogs to pro-business groups, and a spate of special-interest infighting has many observers wondering about the outcome.

The shaky consensus happened after Marin environmental groups, leery about land use issues, announced that they would support the sales tax measure only if they could ensure that some of the sales tax revenues go to purchase open-space lands.

“Business groups are coming around to recognizing that if this is going to fly, they have to have the environmental groups on board and to recognize that the issues of land use and transportation are linked,” explains former Marin County chief planner Marge Macris, chair of the Marin Sierra Club and one of two environmentalist representatives on the Transportation Steering Committee. “There’s a reluctant acceptance for the push for land acquisition money.

“Indications are that people are concerned with traffic–they know it’s a mess. Although [the Calthorpe plan] would be a benefit more to people who live in Sonoma County and work in Marin County [than to Marin County residents], I think it would clear up the traffic situation.”

However, Macris adds, “I don’t want to mislead anyone. This is still controversial and there’s not unanimous support. A lot of Marin environmentalists think [the transit plan] is a bad idea and don’t like it.”

While the Steering Committee may have hashed out a potential ballot measure, it’s not a done deal. The proposed sales-tax plan will likely go up for approval by the Marin Countywide Planning Agency and the Marin Board of Supervisors before the issue goes before voters. Meanwhile, some Marin environmentalists remain unconvinced about the benefits of widening Highway 101, and are especially critical of how their Sonoma County counterparts are handling some of the same issues.

“The politicians [in Sonoma County] are in favor of development, so the environmentalists there have felt they have to agree to some road widening to get what they think will save Sonoma County, which is public transportation,” says Creighton, who accuses Sonoma County environmentalists of “doing deals” with the business community. “I think they’re taking too much road to get that train. If you widen the road, you increase development pressure.”

A June public opinion poll showed that more than 70 percent of North Bay voters support the transit tax. That figure drops to below 50 percent if rail is not part of the package. However, 14 percent of respondents said they would ride the rail regularly.

“In Sonoma County, what I worry about is that [the environmentalists] are accepting too much. They want to negotiate with business people. But if they widen the road too much, who will use the train?” Creighton asks.

CHRISTA SHAW OF SONOMA County’s Greenbelt Alliance agrees that train ridership is a concern, but she adds that “the typical thing between Marin and Sonoma county environmentalists is that, in Marin, they’re often opposed to transportation improvements in general. … Marinites tend to be holier-than-thou, and it’s not fair. But Sonoma County has done some good work [environmentally] and things are changing here.”

Bill Kortum of Petaluma, veteran Sonoma County environmentalist and a member of the Sonoma County Transportation Coalition, echoes that sentiment. “Marin is impressed with the strides we’re making here with urban growth boundaries and the open-space purchase program,” he says. “We’re making real progress, and they have not done much in the past, so they can’t say we’re not aware of the situation and aren’t doing anything.

“I’m not hearing some of the old criticisms anymore.”

Creighton, however, says she has a lot of concerns about the Calthorpe plan’s possible negative impact on Marin. “All access through Marin encourages development and destroys agriculture. Although Sonoma County is doing some urban growth boundaries, it’s not as strong historically or politically [as Marin] at protecting ranches and farms. And if Sonoma County builds a bunch of cheap homes, Marin will be pressured to [further] widen the freeway.”

Marin residents have no real desire for highway widening, she says, apart from adding a four-mile commuter lane from the Marin Civic Center to the Larkspur Ferry at a cost of $35 million, which Creighton believes Marinites will eventually obtain from federal government funds, not the sales tax.

“In Sonoma County, a lot more people in positions of leadership want to widen the highway–they’re even trying to tuck widening the area from Petaluma to Novato into the measure, and this was never in the Calthorpe plan,” laments Creighton. “People have started calling that stretch ‘the Novato narrows.’ The implication is it’s something that needs to be widened. Some of the Novato City Council have even started calling it that.

“Why should we widen the road with our taxpayer money so Sonoma can ruin its county?” asks Creighton, adding, “Marin people will fight this to the death.”

The cost of widening the nine-mile segment that includes the Petaluma Bridge is $124 million. A 1997 public opinion poll showed that 78 percent of Sonoma County voters support widening the freeway from Windsor to Novato without interruption. However, Kortum still believes that Sonoma County environmentalists won’t support the tax measure if it includes widening the Petaluma-to-Novato stretch, calling it “the wrong place to put local money.”

Both Kortum and Ellman say that even though there have been recent important breakthroughs in Marin County, they’re unconcerned with how things eventually play out in the neighboring area because, they say, there’s adequate ridership to start their dream of a rail system in Sonoma County. “I’m not that worried about Marin support,” says Ellman. “Suppose Marin doesn’t have a ballot measure, or doesn’t support having a railroad and suppose we do?

“I don’t see any difficulty in running the railroad anyhow. The main line turns east out at Novato, and from there it could connect with the rest of the United States.”

A public forum on the latest developments in the Calthorpe plan to fund transportation in Sonoma and Marin counties will be held Jan. 22, from 7 to 9 p.m., at the Sonoma County Board of Supervisors chambers, 575 Administration Drive, Santa Rosa. The forum is sponsored by the Sonoma County League of Women Voters.