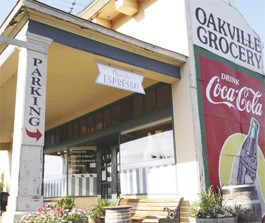 The historic and original Oakville Grocery, which has been in business for more than 125 years, radiates ambiance in every nook and cranny, and that feeling rubs off on nearly everyone who steps inside the hallowed space. In Napa County, where brand-new million-dollar mansions and spanking new wineries backed by new money push out the old, a bit of genuine, local history seduces vintners, bankers, bakers and bikers.

In fact, the Oakville Grocery has served locals and tourists from before the turn of the last century, through Prohibition of the 1920s to the Depression of the 1930s and the wine boom of the 1980s. It seemed as eternal as Napa’s rolling hills themselves. Then, in 1997, Dean & DeLuca, the glamorous gourmet food giant, invaded and little by little made life miserable for its poorer rival down the street.

At first, local residents were distraught. Then, many mourned when the little store with the global reputation filed for bankruptcy last winter and, what’s more, when Leslie Rudd, the owner of Dean & DeLuca and the CEO of the Rudd Group snapped it up. A market-savvy, Kansas-born multimillionaire and the cofounder and benefactor of the Rudd Center for Food Policy and Obesity at Yale University, Rudd rarely comes out of hiding at his vast Napa estate. Of all the wine and food barons in Northern California–including Robert Mondavi and Michael Chiarello–he’s surely the most invisible and reclusive.

When his company announced the purchase of the Oakville Grocery (now a three-store chain), Rudd issued a press release and let his public-relations staff handle inquiries. “I am honored to now be the steward of both the original Oakville Grocery location as well as the market that has been an icon of the wine country experience since 1881,” he allowed himself to be quoted as saying. “I am committed to refurbishing this beloved landmark so that it will serve as a symbol of hospitality to Napa Valley visitors for many generations to come.”

Two days after the deal was finalized–on a sunny, spring morning with the hills a bright green, the old, valley oaks sending out new leaves–there was no sign of refurbishing at the Oakville Grocery on Highway 29. The hand-painted Coca-Cola sign still needs a fresh coat; the tin roof begs for cleaning and so do the benches in front of the store. The picnic tables want new legs, and the sagging umbrella could use replacing. But inside, business seemed as brisk as ever, though Linda Cook, the efficient store manager, appeared to be unusually vigilant and perhaps even defensive about the sale. “I have absolutely nothing to say,” she exclaimed, in response to a reporter’s request for an interview, though, when asked, “Do you like the food?” she fired back, “Of course, I do!”–and sounded like she meant it.

It would be hard not to like the food at the Oakville Grocery. It would also be nearly impossible not to find something appetizing, even for the most finicky eater, though finding the items on a shopping list might take time. Intrepid shoppers enjoy the Oakville experience, because they have to hunt for what they want, and sometimes they even discover something new and unexpected, like the Katz and Company wildflower honey.

Ozzie Gallegos, the recently hired, bilingual wine buyer, apologized to a customer for not having a larger assortment of wines and for a nearly nonexistent and embarrassing section of French and Italian reds and whites. Born and raised just minutes from the Oakville Grocery, Gallegos knows its long, rich history and the roles Joseph Phelps and Steve Carlin played in shaping the store’s image from the 1970s to the year 2000. “There’s no such thing as a slow day here,” Gallegos says. “If you’re claustrophobic, you don’t want to be here in the first place.” He adds wistfully, “I hope they hold on to the aura of this place.”

In the deli, a small army of Mexican women make hot and cold sandwiches: grilled cheddar and young Asiago or smoked turkey and Brie. These speedy lunchtime miracle workers slice Serrano ham from Spain, mortadella from Italy, and Willie Bird smoked turkey from Sonoma County. Probably the very best food they wrap and package are the freshly made Green Chile tamales with black beans, cheese and corn and the sumptuous steak chimichangas that come with bite-size cubes of steak, Jack cheese, pico de gallo and bell peppers.

Phil Box, who has worked for Robert and Magrit Mondavi and for Francis and Eleanor Coppola, sees Rudd’s purchase of the Oakville Grocery as symptomatic of what’s happening to Napa. “Everyone wants a piece of the county,” he says. “The nouveau riche have rushed in, and Napa has become a place to see and to be seen. I’ve met all kinds of royalty there: counts and countesses from Italy, barons and baronesses from France.”

Perhaps new paint, new floors and more modern fixtures will add to the glory of the once grand Oakville Grocery. Perhaps Leslie Rudd will achieve yet another triumph of repackaging. But it’s no wonder Napa residents ask one another what he means when he promises to become a “steward” of the Oakville Grocery, and what he has in mind when he talks about “refurbishing.” It’s no wonder, too, that local residents ask friends and family if they’ll respond to the new sign on the old, weather-beaten front door that reads, “Full Time and Part Time Positions Available: Cashiers, Barista, Grocery, Deli, Sandwiches.”