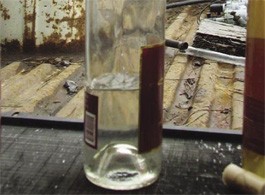 Fuel to the Fire

Wasted: ‘Junk’ wine becomes fuel for cars when in the hands of the Green Energy Network geniuses.

Behind a one-time pencil manufacturing plant in the rolling hills south of Sebastopol, Damon Knutson is brewing the antidote to Big Oil. Using windfall apples and “junk” wine that local vintners can’t sell, he is out to demonstrate that decentralized production of ethanol from locally grown agricultural waste is beneficial and viable, both economically and environmentally.

Believing that “oil and our consumption of gasoline had a lot to do with what happened on 9-11,” Knutson dove into an exploration of alternative fuels, first studying hydrogen and then biodiesel before concluding that ethanol “seemed to be the best answer for renewable energy.” Having met other like-minded folks during those inquiries, he says, “We formed a group of community enthusiasts who use ‘E’ and are trying to promote the production and use of it.” Thus the Green Energy Network (GEN) was born, as a modern, socially acceptable application of an old, disreputable practice.

“We’re basically making moonshine,” Knutson explains cheerfully, showing off the newly cleared space where a low-tech, decidedly homemade apparatus is being set up. “Ethanol is alcohol, very strong alcohol, about 180 proof. You can actually burn about 140 proof, but if you’re going to mix it with gasoline, which is how we do it, you want to get the water out, and 180 proof is basically 90 percent alcohol and 10 percent water.”

Most members of the small collective use “splash blending” to combine the ethanol with conventional gasoline, usually in a ratio of 25 percent to 50 percent ethanol per tankful. “At 25 percent, you definitely notice more push,” reports Kevin Counter, an experienced mechanic and GEN member. That extra power comes with a slight decline in mileage–which becomes more noticeable as the ratio is increased–but a significant drop in exhaust emissions. Having tested 30-plus cars of varying age and make, Counter says, “Almost every car at 25 percent gets about half the emissions of the car on regular gas. It’s unreal how clean the car will run after its been running on 25 percent ethanol.”

Most any car produced since 1984–the year when rubber-based hoses and gaskets that can be dissolved by ethanol were phased out–can use splash blending without modification (although new model owners may find that doing so invalidates their warranty). “I’m using my Volvo with 50 percent, and it’s running great,” exults GEN enthusiast Tui Wilschinsky. “The sluggish Volvo engine is peppy.”Beginning with just a gallon or two of ethanol mixed with the usual petrol, Wilschinsky explains, “You slowly clean out your engine.” A more abrupt transition would “release so much crud, you’d gum up your engine.”

Higher concentrations do require some minor adaptations, but Knutson has converted his Nissan sedan to run at 85 percent ethanol. They have also modified a Taurus that now burns 95 percent, and the new generation of “flex-fuel” vehicles coming out of Detroit are manufactured to operate at the E-85 standard, 85 percent ethanol.

Initially, GEN “imported” corn-based ethanol from Nebraska, just to have fuel on hand to experiment with. But the larger vision was always to produce their own, which they first did with a gift of “27 cases of bad wine,” donated, Knutson says, by a local vintner who would prefer to remain anonymous. With a little trial and error, they soon attained 160 proof, using a seven-foot distillation column and “just a 55-gallon drum sitting on top of a propane burner,” says Brian Eberly, the young engineer who assembled the column.

Satisfied that the concept was sound, Eberly oversaw the construction of a new, larger and more energy-efficient system able to process 2,500 gallons of raw materials at a rate of 30 gallons per hour, resulting about eight hours later in approximately 250 gallons of fuel. Using a small gas-powered generator (converted to run on ethanol, of course), the process begins with the wine being pumped through a series of heat exchangers connected to the generator’s exhaust port. It passes through a second chamber with a heating element (much like a home water heater) and, having reached 185 degrees, or boiling temperature, it enters the boiler, which was formerly a sturdy metal beer keg.

From there, water and alcohol vapor rise from the liquid up the column, with the heavier water dropping out while the vapor enters a coil at the top which has cold wine circulating around it. This warms the wine and cools the vapor, which condenses back into a liquid with the desired 180 proof. As more wine enters the boiler, the leftover “wash” is pushed out into more heat exchangers that transfer its warmth to cold wine, before the wash winds up in a storage tank, awaiting reuse as vineyard irrigation, fertilizer or even animal feed.

As a whole, the system is approximately 90 percent efficient, Eberly says. “For every 100 gallons we make, 10 gallons goes into running the generator.”

The big remaining variable is the raw material. While just about any kind of vegetable matter can be converted to alcohol, wine has the immediate and obvious advantage of already being alcoholic. Windfall apples work, too, but they must be fermented first. As Eberly explains, “Anything you make from fruit is called ‘wine’; if you make it from grains, it’s called ‘beer.'”

Regardless of nomenclature, there just aren’t large volumes of ag waste readily available these days. So Knutson is investigating growing his own raw material, in the form of Jerusalem artichokes. “They’re not actually an artichoke, they’re actually a sunflower,” he elaborates, and “they produce in the neighborhood of 600 to 1,500 gallons of ethanol per acre,” which contrasts quite favorably with 60 gallons per acre for the soy that is grown for biodiesel. The Jerusalem artichoke is also known for its willingness to grow abundantly in poor soils and with minimal cultivation, attributes that the GEN experimenters plan to gauge in some test plots over the coming months.

The goal is an easily scalable alternative to corn, the heavily subsidized, petrochemical intensive source for most commercially produced ethanol in this country. According to Knutson, “Corn only generates about 300 gallons per acre,” while Brazilian manufacturers are using that country’s widely grown sugar cane. “The figures I’ve seen are anywhere from 600 to 1,200 gallons per acre, 662 gallons per acre by one report,” he says. “That’s pretty good.”

But that’s production on an industrial scale. Brian Eberly’s vision runs in the opposite direction, where every large farm or vineyard has its own still onsite. “That way we don’t have to truck the raw materials around, and the wash is right there to irrigate their farms,” he says. “It’s much easier to transport 100 gallons of fuel than it is a truckload of apples.”

Getting there will require some substantive changes in current law. “In California, there is only one station where you can buy ethanol legally,” Knutson notes. It’s in San Diego. “There are some other test sites, four or five of them, and then there are people like us that are doing it under the radar. In the Midwest, where the fuel is plentiful, it’s actually cheaper than gasoline, so California needs to do something to bring a clean fuel to the masses.”

In attempting “to do some of the guinea pig work” for the Golden State, Knutson and the few dozen others who have participated in the Green Energy Network’s experimental efforts have been doing it as a “hobby.” But Knutson assures, “We have a bigger picture in mind. We want to see this take hold as a business or economic model that can sustain itself. And that’s how we’re forming it: community shared fuel.”