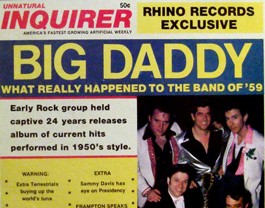 While the introduction is a clear nod to Tina Turner, this version of “Proud Mary” downshifts the Creedence classic into a midtempo, doo-wop shuffle—the “old” opening—before kicking into a hard-bop swing treatment that turns the clock back even another decade.

Welcome to the mysterious world of Godfrey Daniel.

That was the name under which an otherwise anonymous group of musicians released a 1972 gem titled Take a Sad Song…, which reworks a fistful of enduring hits from that time into stylistic ringers for performers from the pre-Beatle ’60s all the way back to a crackup, Al Jolson&–ized “Groovin'” and a Rudy Vallee&–ish crooner fronting a Goodman-like combo for the ultimate throwback cover of Buddy Miles’ “Them Changes.”

Most of the rest—”Purple Haze,” “Dance to the Music,” “Honky Tonk Women” and more—come in various shades of doo-wop, but it requires a more thorough knowledge of the genre than mine to recognize the nuances that distinguish a Coasters parody from a nod to the Clovers or the Regents. Fortunately, that’s not necessary to appreciate the way arranger Andy Solomon is able to find an earlier-era touchstone at the heart of each song.

Solomon and engineer Dave Palmer are the only people credited on the album jacket, despite what sounds like a cast of dozens, including multiple singers and a versatile horn section (cryptically credited as “The Charles Solomon Orchestra with the Syncopated Serenaders”). And they’ve kept their secrets well. There’s speculation among the album’s scattered fans that Godfrey Daniel (the name was a favorite W. C. Fields expletive) was in some way linked to the Amboy Dukes (“Journey to the Center of the Mind”), an idea based solely on the presence of an Andy Solomon in that early Detroit psych-rock band. But it hardly seems plausible that a one-time Ted Nugent sidekick could have helmed a project so vastly different in style and sensibility.

Take a Sad Song… was scarcely noticed when it first came out, and so far has not been deemed worthy of a CD reissue. But even now copies turn up occasionally in used record bins here and there. If you see one, your four bits will be well invested.

A decade later, a more identifiable group latched on to the same concept and rode it into the CD age. Big Daddy was an L.A.-based quintet whose “official” bio explains that the band members were captured during a USO tour of southeast Asia in 1959 and held in Laos as POWs. The band was allowed to practice and play, but didn’t hear any new music until their release from prison in the mid-1970s, which explained, so the story went, their need to play then-current songs in styles that were mostly two decades older.

On their 1983 debut, What Really Happened to the Band of ’59 , Big Daddy gave the doo-wop do-over to the likes of “Eye of the Tiger,” “You Don’t Bring Me Flowers” and “Just What I Needed.” More amusing, however, are the wilder contrasts, such as a stripped-down, surf-guitar adaptation of the theme from Star Wars, or applying clean, clear Everly Brothers harmonies to “Super Freak.”

But Big Daddy’s masterwork was their fourth and, so far, final release in 1992: Sgt. Pepper’s, a track-by-track remake of the Beatles’ landmark album in which each oh-so-familiar song is recast as if performed by a distinctive voice from a generation earlier, from Elvis (“Lovely Rita”) to Jerry Lee (“Lucy in the Sky with Diamonds”), Freddy Cannon (“Mr. Kite”) to Johnny Mathis (“With a Little Help from My Friends”). “Within You Without You” becomes a bongo-driven beat-poetry recitation, while the album’s epic closer is rendered à la Buddy Holly, ending not with an orchestra implosion but a newscaster’s report of a fatal plane crash.

All in all, an impossible act to follow. No wonder they haven’t tried.