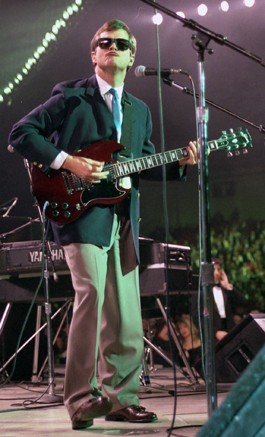 The 41-year-old, jogging-suit-clad body of Harvey Leroy “Lee” Atwater was buried on April 1, 1991. The date was considered significant on two counts.

One was that it was Easter weekend, and Atwater’s terrible death of brain cancer had been excruciating, as if “from the cross.” It was also fitting that this shameless liar and evil prankster was eulogized on All Fool’s Day.

First as hired gun, later as chairman of the Republican National Committee, Atwater bamboozled his country with two decades of uniquely vicious political campaigns. He died young, before he could write an autobiography celebrating his unique achievements in the art of deceit. But if he were alive today, he’d see that his craft lives on. For example, Republican strategist Tucker Eskew is an Atwater disciple. Eskew is likely the man responsible for the latest McCain/Palin strategy of smearing Obama by claiming that he goes steady with an ex-Weatherman.

In just under 90 compact and infuriating minutes, Stefan Forbes’ Boogie Man: The Lee Atwater Story gives us the man who got Bush the Elder the White House instead of a well-deserved jail cell for his part in the Iran/Contra scandal.  And, as a rueful Michael Dukakis tells Forbes, “If I’d beaten the old man, you never would have heard of the kid.” Atwater mentored his friend George W. Bush. If Karl Rove is Bush’s brain, Atwater was Rove’s teacher.

Raised in working-class South Carolina, Atwater was haunted by the untimely death of his younger brother. Aside from this tragedy, Atwater’s history is as sketchy as the man himself. (He was married, but there’s very little info here from his widow.) One of the main sources for Boogie Man are terrific interviews with Ed Rollins, Ronald Reagan’s ex-assistant. Rollins is a Vallejo-bred ex-boxer who looks and sounds like Gene Hackman. Atwater’s scandal-mongering was too much even for this hard-charger.  Rollins weaves fascinating, regret-tinged anecdotes about his rival Atwater’s rise and fall.

Forbes refreshes the public memory about the campaigns against Bob Dole in the 1988 primaries. Later that year, Atwater tried to float the idea that Dukakis was mentally unstable. An early master of the push poll, Atwater once jinxed a Jewish congressional candidate by phoning Southern voters and asking, “Would you vote for a man who didn’t believe in our lord Jesus Christ?”

Atwater’s defenders claim he wasn’t at all racist. But novelist Ishmael Reed has to compose himself for five seconds of screen time before he can be calm enough to discuss Atwater’s famous “Revolving Door” campaign, threatening America with an onslaught of negro rapists if Dukakis were elected.

Forbes includes the counterpoint of friends and advisers. Eskew himself is interviewed, saying that liberals never will understand how working-class loyalty to patriots crosses all class lines. A more germane cautionary note comes from conservative strategist Mary Matalin. She insists Atwater’s deathbed repentance for a long career of dirty tricks obscures the importance of the message Atwater was delivering.

That’s an argument. But to quote the profane Rollins, “Bullshit. Atwater had no principles.”  While doing his bit to inflame the Republican base, he privately referred to the anti-abortion single-issue voters as “extra-chromosome cases.”This was his life and his art: repositioning pink-sweatered Connecticut gentry as Texas rebels, and teaching Ronald Reagan to say “welfare queens” instead of “darkies.”

Atwater’s well-publicized hobby of playing blues—the basis for this documentary’s wickedly ambiguous title—debased even that music’s force for rebellion. One clip here shows how a 1980s TV newscaster had to explain what “a so-called negative political advertisement” is. Who needs such an explanation now? Thanks, Lee.

My problem with the current cinema is that nothing is as exciting onscreen as the political spectacle going outside the theater. This is the exception. I was expecting some amount of guilty pleasure from Oliver Stone’s upcoming farrago W, but Boogie Man will probably surpass it by serving up a villain worthy of Richard III.