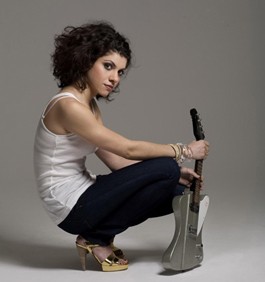 Carrie Rodriguez steps out on her own

Since we last spoke in 2006, Carrie Rodriguez has pretty much been on tour. Other than a couple of months in the studio recording her latest album, She Ain’t Me, the road-tested Rodriguez and her band have crisscrossed the country several times. On the cusp of yet another tour that visits Healdsburg’s Raven Theater on Oct. 16, she enjoys a rare day off in her adopted hometown of Brooklyn, N.Y., fielding phone calls and explaining how she grew into the performer she is today.

“My mom was an opera buff,” she says. “My dad—he’s a musician—he turned me on to the Texas singer-songwriter folk scene.” But the Austin youngster kept to the beat of the maestro rather than the mandolin; even in the hotbed of Americana music, Rodriguez took up classical violin when her divorced mom enrolled her in the Suzuki Method music classes.

While attending the Oberlin Conservatory of Music, Rodriguez had a revelation, thanks to old family friend Lyle Lovett. “That was a real turning point for me,” she says. “Lyle knew my dad; they came from the same scene in Houston. Lyle later recorded one of my dad’s songs on his Step Inside This House album. He knew I was at school up there and invited me to his show in Cleveland. He actually told me to bring my violin to the sound check. I think he just wanted to check me out. I sucked so bad. I was still into classical and didn’t know how to accompany a song.”

This got Rodriguez to thinking that she wanted to learn, so she left Ohio and transferred to the Berklee College of Music. “Lyle came through Boston the next year,” she relates, “and did the same thing, told me to bring my fiddle to the show. I’m sure I was nervous—it was at the Orpheum Theatre in front of a few thousand people—but it was just such a sweet moment. Not only was I onstage with Lyle, but we were playing my dad’s song that he wrote for my mother when they got married. It was special.”

After returning to Austin, Rodriguez started playing with a local band when she was approached by legendary songwriter Chip Taylor at South by Southwest. “The whole thing made me a little uncomfortable,” she recalls. “He asked me if I sang harmony, and I had never done that. He was real easygoing about it, he put a microphone in front of me one night.” A duo was born.

She Ain’t Me is Rodriguez’s second release as a solo artist, but after the Taylor-heavy Seven Angels on a Bicycle, she considers it “my first solo record. It’s more autobiographical. I wrote most of it. I love songwriting; it’s an important outlet for me. It’s fresh and new. But I know that after working with Chip, I’m pretty green.”

“I guess it was fate that I met him,” Rodriguez says of her long association with Taylor. “It’s allowed me to do things I never thought of doing.”