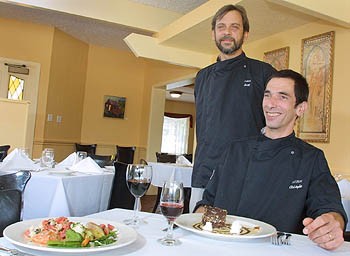 SINCE VETERAN local restaurateur Michael Hirschberg sold Mistral and left that biz last month, changes reign at the Santa Rosa restaurant. As Mistral now attempts to find its footing amid fussier food and a new and seemingly less attentive staff, regular diners there will be hard pressed to find a familiar face among the hosts, servers, and bus people.

The reason? Some devoted Mistral patrons have migrated to Lutecia, a new Sebastopol-based restaurant featuring French food with a local twist.

Lutecia (its moniker reflects the ancient name for Paris) is owned by Barbara and Christophe Préyale, who have roots both in Paris and Sonoma County–hence the interesting blend in cuisine.

The new restaurant is housed in the site that used to be the Sebastopol Grill. It’s a large house with two dining rooms and prominent windows overlooking an expansive grassy area surrounding the restaurant. Seated by the window on a summer evening at dusk gives the impression of dining in a more rural setting.

Since the place is newly opened and freshly painted, it lacks a bit of softness (a few more pieces of artwork or other wall decorations, and subtle window treatments would do wonders.) Still, the overall effect is pleasant; smart without being overly formal.

The menu changes daily, and it simply features two sections: Les Hors d’Oeuvres and Les Plats. The appetizers are heavy on specialty salads; there are four on the menu tonight. These include a salade maison ($4.25), a classic with mixed baby greens, cherry tomatoes, cucumber, celeriac, and mustard vinaigrette; and a salade de mer ($9.50) featuring scallops, shrimp, mussels, red peppers, and croutons over arugula and butter lettuce.

The salade Landaise ($9.50) is a brimming plateful of savory treats. It starts with a layer of fresh butter lettuce and is heaped with haricots verts, thin slivers of smoked duck breast, and warm confit of duck, crowned with a small triangle of luscious foie gras. Grab a hunk of crusty bread and this could be a meal in itself.

Vegetarians can gorge royally on the satisfying pissaladière aux cèpes ($10.50), an intricate porcini mushroom tart with gold tomato coulis, truffle oil, and sautéed mixed vegetables on the side.

Following Kudla’s recommendation, I order the escobar forestière ($15.75). It’s a Hawaiian fish with the meaty texture of salmon and the clean taste of halibut. This dish is complex in flavor, melding the earthiness of the accompanying forest mushroom risotto and the brightness of a citrus-and-herb butter with the mellow fish. The combination works well, and the flavors are further heightened with a glass of 2000 Murphy Goode sauvignon blanc ($5.25).

Though the wine list is relatively small, the staff will work with you to select the best match (shades of Mistral’s popular food and wine pairing dinners here).

Desserts are prepared by co-owner Christophe Préyale, and though we only can manage one–it’s a champion. It’s a sublime crème brûlée au Grand Marnier ($4.50) that slides down the throat, leaving behind happiness and energizing traces of orange.

With its terrific service and high-quality food, Lutecia is a great addition to the Sebastopol downtown dining scene.