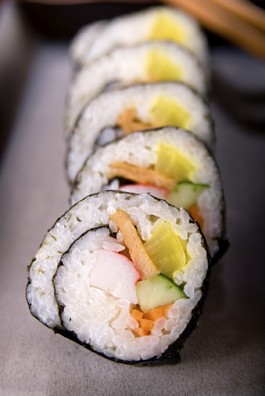 I‘ve started to live a double life. Or at least my stomach has. Half of the week I’m an omnivore, eating tacos, sashimi and barbecue, often all before dinner. But the rest of the time, I’m a vegetarian with serious vegan inclinations. It didn’t used to be this way.

As a food journalist, I eat out for upcoming restaurant reviews. I eat out to familiarize myself with new cuisines. I eat out and write about it on my blog (www.metrosiliconvalley.com/livefeed). I eat because I’m hungry. I eat a lot.

I once read a spy novel about some terrorists who, in order to pass as Japanese citizens, studiously ate Japanese food before a big operation in case they were killed and inquisitive minds wanted to examine the contents of their stomachs to find out who they were and where they came from. If someone were to examine my insides on my days at the office, they’d be thoroughly confused about my identity. It’s a United Nations of food in there, although sometimes the bun bo hue doesn’t get along with the clam chowder and it takes a few Tums to calm things down.

I used to eat with the same abandon at home, but instead of going out to eat, I’d cook the food myself. While my wife handles the occasional dessert, I cook everything else, and I was eating as promiscuously at home as at work. But over the past few weeks, I’ve felt the need to lighten up. Short ribs, skirt steak, roast chicken and roast pork are out. Salads, roasted cauliflower and veggie burgers are in. Part of my change in diet was due to high cholesterol, an occupational hazard. Part of it, too, was that it just feels better to eat less meat. My body needed a break. But what really sealed the deal was learning about the environmental costs of profligate eating.

I’ve long known about the evils of factory farming and the human and environmental damage caused by pesticides and herbicides used in food production. But I didn’t know the extent to which some of my favorite foods—beef, cheese, fish—contributed to global warming. Food production in America creates more greenhouse gases than driving. While you may drive a Prius, eating the equivalent of a Hummer is no longer tenable. Livestock emit 18 percent of greenhouse gases worldwide. I learned these and other disturbing facts by going to EatLowCarbon.org, a new website that calculates the carbon footprint of what you eat.

On the website, you simply drag and drop food items into a skillet, and it calculates the carbon dioxide equivalent. A cheeseburger racks up 1,855 points, while a falafel only has 300. Each point is the equivalent of one gram of greenhouse gasses. The food calculator is the work of Bon Appétit Management Company Foundation, the nonprofit arm of the food service company that feeds Yahoo, eBay, Oracle and 400 institutional clients around the country. The foundation seeks to educate people about how food choices affect the environment. The carbon calculator does that in spades. Play with the calculator for a few minutes, and you get the picture. “What we’d like people to do is take away some big messages,” says Helene York, director of the foundation.

Eating large animals like cows contributes to global warming because of the amount of methane cattle emits. Cow flatulence is 23 times more potent than CO2. Producing grain and corn to feed animals is also carbon-intensive. And shipping the beef to market further adds to the carbon load of that double bacon cheeseburger. And, oh yeah, cheese is bad news too, especially imported cheese that flies in on a jet. Sorry, all you cheese-eating vegetarians. You don’t get a pass. And the typical sushi bar with all that air-freighted fresh fish? An environmental nightmare.

Even if you eat food with a lower carbon footprint, tossing out uneaten or spoiled food is a “dead loss” for the environment, because not only will the carbon that went into producing the food be for nothing, food that sits in a landfill can then emit methane, adding more heat-trapping gasses to the atmosphere. “It’s the old argument: eat all your rice, because there are people starving in Africa,” York says. “That still holds true, now more than ever.”

While eating is a carbon-intensive activity, the good news is that it’s possible to change what you eat. Collectively, that can make a real difference. As a restaurant critic and food lover, I’m not ready to give up meat and cheese and other carbon-intensive foods yet. But when I’m not on the clock, you can bet I’ll be paying closer attention to the impact of what I eat, and eating a lot more vegetable soup and salad made from lettuce picked from my backyard.