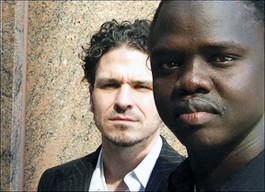 Eggers and Deng discuss 'What Is the What?'

Just six years old when his village was blown apart by northern Sudanese government militia, Valentino Achak Deng one afternoon became an unwilling member of the Lost Boys. So called because for the 20-plus years that they fled southern Sudan, these 27,000 children were largely unattended by adults as they walked hundreds of miles to what they hoped would be safety in Kenya and Ethiopia. There they were housed in massive refugee camps where they attempted education, thousands of them eventually emigrating to the United States, Deng among them. He settled in Atlanta, Ga., and tried American normalcy, working at a health club and attending community college.

One night, Deng heard a knock on his door. Standing in the hall was a man who asked to use his cell phone. Deng let him in. In novelist Dave Eggers’ hands, Deng’s subsequent mugging in his own apartment—he was bound and tied and left on the floor under the indifferent watch of a 10-year-old boy—offers the here-and-now framework that allows the telling of his then-and-there story.

Eggers’ skillful weaving of Deng’s life became What Is the What? , first published in 2006. Now out in paperback, the book has been embraced by Marin County’s One Book One Read program. Eggers and Deng appear with moderator Michael Krasny on April 23.

Eggers was alerted to Deng by Sudan activist Mary Williams, who contacted him in 2003 and essentially ordered him to drop all else and fly to Atlanta. There he met Deng, with whom he felt an immediate connection. The two men holed up and Deng told his story over the course of 12 hours. Eggers promised to craft the tapes into a book with all proceeds going to Deng. Three years later, the difficult narrative was done and the Valentino Achak Deng Foundation began its work to rebuild Deng’s own village and to provide essential humanitarian services to Southern Sudan.

But my own earnest retelling gives not a whit of the beauty of this miraculous book. Fictionalizing that which couldn’t be accurately reconstructed, Eggers uses the plain words of Deng’s own hard-won English to describe how he and other Dinka boys walked, died and survived during decades in the desert. That life in the States would also be overwhelmingly tough is only one more difficult truth in this stunning book.