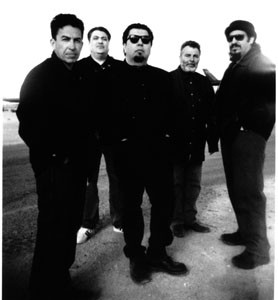 The first time Los Lobos appeared in the North Bay, shortly after the release of their 1983 Slash Records seven-song debut EP . . . And a Time to Dance, fewer than two dozen people braved a rainy winter night to congregate at Uncle Charlie’s nightclub in a small Corte Madera strip mall. Yet the band delivered a blistering set of their trademark fusion of polka-beat norteños, blues, soul, folk, and rock that showed the audience it was witnessing the birth of something quite special.

At a time when the burgeoning Americana scene serves up the next big thing with tedious regularity, Los Lobos–who perform at a sold-out show on April 3 at the Mystic Theatre in Petaluma–have established themselves as America’s premier roots-rock band, thanks in no small part to the remarkable songwriting of drummer Louie Perez and multi-instrumentalist David Hidalgo. Their talent for penning thoughtful modern folk songs garbed in colorful Latin rhythms is evident on their most recent album, Good Morning Aztlán, which gently reflects the hopes and sorrow of their East Los Angeles community.

“We find that a large story often can best be told through a small story,” Berlin explains. “We need not draw a large picture to make a small picture understood. And, frankly, that’s one of Louie’s gifts. He’s one of the finest lyricists of our time. He just has that knack for describing a universal condition through a closely observed story.”

In 1974 this group of boyhood chums–Perez, Hidalgo, Cesar Rosas, and Conrad Lozano –formed a folk band and spent their garage days ricocheting between mainstream rock and Mexican border music. They cut their teeth on an endless string of backyard barbecues, raucous wedding parties, and late-night dances before hooking up with the L.A. rockabilly band the Blasters, who helped get them signed to the Slash label and introduced them to Berlin.

Success came quickly on the heels of . . . And a Time to Dance, which garnered a Grammy Award for the folksong “Anselma.” Their 1984 breakthrough, How Will the Wolf Survive?, was a Tex-Mex tour de force that showed up on everyone’s Top 10 list. That year, Los Lobos earned Band of the Year honors in Rolling Stone‘s critics’ poll, tying Bruce Springsteen and the E Street Band.

In 1985 the band recorded on Paul Simon’s landmark Graceland album, soared to the top of the pop charts with their turbocharged version of “La Bamba,” and went on to issue several acclaimed albums that seesawed between acoustic folksongs and electric roots rock.

The following year, Froom, engineer Tchad Blake, Hidalgo, and Perez spun off the eclectic Latin Playboys project, a sort of soundtrack for the global village. The public didn’t embrace their often dissonant music, and all but the most hardcore fans bailed. The label bailed. After a three-year dry spell, band members returned with a dizzying series of spinoffs.

These days, Los Lobos have refined their patented blues- and soul-based sound with Good Morning Aztlán, and are recording a segment with filmmaker Wim Wenders for the upcoming PBS-TV series The Blues. And, of course, there is that upcoming 30th anniversary album.

“We want to revisit new and old material with various collaborators to pay tribute to the people that inspired us,” says Berlin. “One of the frustrating things about the last record was that a lot of response reflected ‘another good record from another good band,’ unlike some bands that shit on tape and the world goes berserk. Somehow, we’ve reached a level of competency that certain people don’t get excited the way we get excited about the material. We thought we’d made a great record.

“So we’re going to do something that is more of an event, and we’ll see if the world gets excited by it.”