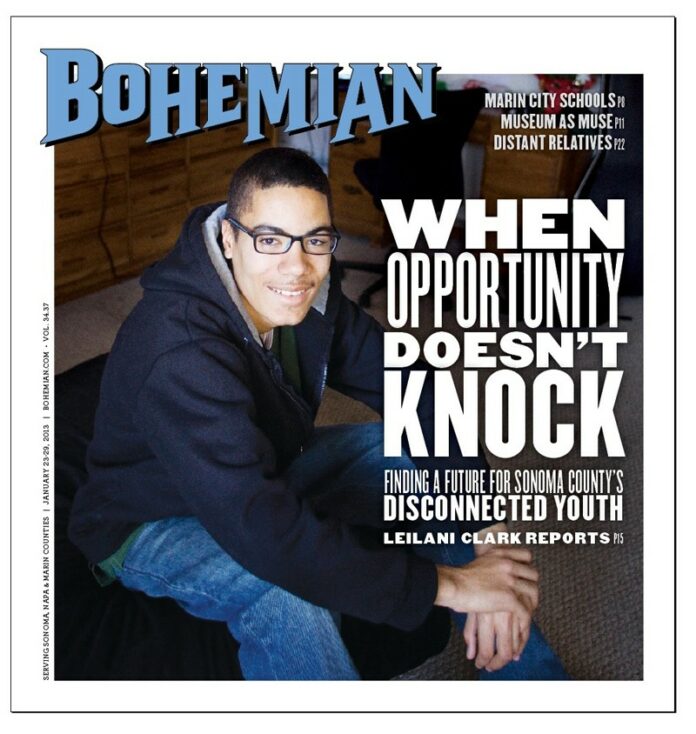 Bella Ortega didn’t spend her 18th birthday with family or friends. Instead, she was locked up in a Sonoma County Juvenile Hall cell on a violation charge, thinking hard about how she’d ended up in such a low place on such an important occasion.

Soft-spoken, dark hair pulled back into a low ponytail and dressed in a gray Oxford shirt and jeans, Ortega says the experience triggered a stark understanding of her life choices. “It made me open my eyes to do bigger and better things,” she explains.

A student from Ridgway High School, Ortega graduated last December and immediately began a job hunt. She plans to attend Santa Rosa Junior College this fall, but it’s been a challenge to fill out the online financial aid application for various reasons, like access to computers and to her mom’s information. A job application to Kmart resulted in a call back for a group interview, where she was the youngest applicant. She didn’t get hired.

“I thought it would be a little easier to find a job, but it’s not,” she says. Ortega admits that her arrest record—she’s on probation until Feb. 27—might pose an extra obstacle.

But Ortega’s situation can’t be completely attributed to her past legal troubles. The reality is that the youth unemployment rate in the United States is at its highest since World War II. A new report by the Annie E. Casey Foundation finds that 6.5 million teens and young adults between the ages of 16 and 24 are neither in school nor in the workforce. These are the “disconnected youth”—and the rates are highest among black and Latino populations.

The numbers are no better in Sonoma County, where 12.5 percent, or one out of eight youth between the ages of 16 and 19, are classified as “disconnected,” according to data from the American Community Survey listed at kidsdata.org. For teens in that age bracket who aren’t in school or working a job, Sonoma County ranks a dismal 22 out of 24 for California counties with populations over 250,000.

Like Ortega, these young adults experience fierce competition from older workers for entry-level jobs. They lack the skill set needed for any higher level jobs that are available. Add poverty, lack of role models, low-performing schools and absent parents to the mix, and you get a recipe for disaster.

Increased illegal behaviors and dependence on public aid are two common byproducts of a young adulthood spent “disconnected,” says Kellie Noe from the Sonoma County Department of Health Services. Noe is a coordinator of Cradle to Career, a new countywide partnership that connects all segments of the educational continuum—from prenatal, to early childhood, to K–12 and into college and technical training.

“Any young person has the potential to become disconnected if they are not given the appropriate support and access to quality educational programs,” Noe says. “We also know that place matters, and that foster youth who age out of the system at 18 are at higher risk; we can’t let these facts dictate who is successful and who is not. Our community has a responsibility to all young people.”

Fortunately, Sonoma County has a good number of nonprofit groups squarely aimed at building possibilities for younger residents. VOICES Sonoma, located in a gray Victorian house near the corner of Mendocino and College avenues in Santa Rosa, is a youth-centered nonprofit that provides transitional services, from food to employment to educational guidance, for foster, homeless and at-risk youth.

“It’s a space to deconstruct and reconstruct,” says Jimmy Toro, a youth founder since the center opened in 2009. The bright-faced, 23-year-old operations assistant in a yellow-sleeved sweatshirt has a clear passion for his work, evident during a tour of the warm, welcoming space.

Throughout the afternoon, the house buzzes with teens and young adults using desktop computers, sitting underneath colorful bulletin boards rife with employment and education resources; they eat healthy, donated food in the upstairs kitchen; they hang out chatting in the foyer and on couches in the cozy common room. Up to 24 youth may come through the door in a given hour, looking for community, safety or just a bite to eat. Once inside, they discover tutoring and workshops on job readiness and development and financial aid assistance.

Humans are physically and emotionally hard-wired for connection, writes Brené Brown, a research professor at the University of Houston’s Graduate College of Social Work. A 2011 study funded by the National Institute of Mental Health shows that the shame and pain of social rejection and disconnection is as real as physical pain—with potentially devastating effects.

Amber Twitchell, program director at VOICES, feels that it’s the responsibility of adults, employers and nonprofit agencies to foster a sense of connectedness between young adults and their greater community. If we don’t, she adds, then we really have lost our disconnected youth.

“When we think of Sonoma County,” says Twitchell, “we think of affluent communities, but there really is this undervalue of young people that either came out of the foster system or the probation system or just didn’t have good families or didn’t complete high school who are now just kind of hanging out there.”

Part of the challenge lies in the fact that some youth don’t understand how to navigate work and educational systems, says Michelle Revecho, program manager at the Social Advocates for Youth (SAY) employment center.

“Ask people when they got their first job, and a lot of times they say my parents knew somebody, or a coach or their parents helped with a résumé,” she says. “A lot of these youth don’t have those networks or those connections that they can tap into.”

Jeramy Lowther ran away from home when he was 16 after his family was evicted from their home. He ended up in foster care, and then homeless, before going to live at the Hanna Boys Center in Sonoma. Now 18, Lowther is two days into his first semester at Santa Rosa Junior College and lives at the Tamayo Village, a transitional housing unit provided by SAY, where he pays $245 a month in rent to share a room. He gets little financial support from his parents; Lowther is learning to navigate the system on his own. This month he applied for jobs at Jack in the Box and Juice Shack, sans results. But he’s not giving up.

“Without SAY or VOICES, I would have never graduated high school,” says Lowther. “I would have gotten myself into a much worse position. I don’t know where I would be now. I don’t know if I’d have a place to live.”

The importance of community resources and connections is finally being embraced by the Sonoma County Board of Supervisors. On Jan. 8, the board listened to two hours of presentations on efforts to ramp up educational and workforce opportunities for youth.

The board voted to give $375,000 to education and workforce development programs, including $100,000 to Scholarship Sonoma County, which provides scholarships to college-bound students in need. It also adopted the community pledge for Cradle to Career.

“We can continue to invest later in additional social services, or we invest now in our future workforce,” Supervisor Mike McGuire told the audience. “We must be focused on educational achievement, particularly as we see this county changing in demographics.”

Those demographics have much to do with age. A county study recently found that 43 percent of high school graduates continue with post-secondary education and less than 25 percent of low-income youth graduate with degrees. At the same time, the retirement age population in the county (ages 60 to 69) increased 76 percent between 2000 and 2010.

Meanwhile, Ortega continues to look for work and sort out her future. She hasn’t received much, if any, help from the family. Freshly sober, her mom struggled with addiction and abuse for years; her father is unemployed and comes around to visit only once in a while. For now, Ortega jumps among the houses of family and friends, never staying in one place for long.

“I get stressed out, which is bad for me because my health isn’t too good,” she says. But walking helps, as does writing and drawing. She wants to get through this time intact, hopefully in school and with a job at the end of it. She’s leaning on SAY for now, and guidance from a 25-year-old mentor.

“For me, being out of high school, being 18 and not having a job or too much support, is pretty hectic,” Ortega says. “I want so much in life that I can’t really get right now.”