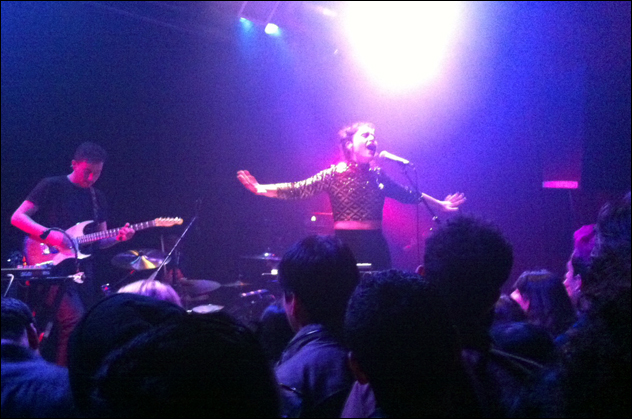 At the start of her packed show Thursday night in San Francisco, Jessie Ware’s token platitudes for the city of San Francisco started out as just that—expected banter from a touring musician, repeated hundreds of times over. By the end of the show, though, after constant affection showered upon the breakout UK star from an adoring crowd, her city-crush on San Francisco rose to fever pitch. Then, when someone handed her a bouquet of roses, Ware completely lost it.
“Oh my Gooooooodddddd!!” she wailed, in thick British accent. “This really is our favorite city!”
Ware’s full-length album Devotion still hasn’t been officially been released in the United States, whatever that means in the year 2013; everyone at the Rickshaw Stop seemed to know nearly every song. Opening with the title track, Ware and her rock-solid band emitted a slow pulse, built it to a climax and, as Ware sang loudly away from the mic, pushed the song into transcendence. It was a formula that would be repeated throughout the night, but never felt, well, formulaic.
The easy way to explain Ware to friends is “She’s kinda like Sade,” and it’s true, musically. But Ware’s stage demeanor was all 12-year-old girl: giddy waves, chatty stories, jokes about the glitter falling from her black-and-gold top. In songs like “Swan Song,” Ware would lose herself in a wash of sultriness; seconds later, she could be asking for breakfast recommendations (Mission Beach the overwhelming crowd favorite) or taking the piss out of someone in the front row. At first, this seemed incongruous. By the end, it came off an entirely natural.
“110%” came early in the set, showing the band’s skilled mix of live instruments and MPC samples, and “Sweet Talk” was all playful flirtation. Ware dedicated her biggest hit, “Wildest Moments,” to the song’s inspiration, her friend Sara (“The next song is about my best friend Sara. Sara, Sara, Sara. My wildest moments Sara. We do love Sara, but we also hate Sara. But we love her more than we hate her…”) and knowing the song is about a friend and not a paramour made it even better.

Ware turned Bobby Caldwell’s “What You Won’t Do For Love” into an gem of a duet with her guitarist, and ended the set with “Running,” a percolating groove with memorable guitar hooks and perfectly placed hi-hats. A shared elation blanketed the room as it emptied out, a sense that yes, here stood a rising star indeed.
Ware’s perfect voice echoed in San Francisco for hours afterward.

Next ArticleHow To Fix That Death Waltz Record Cover