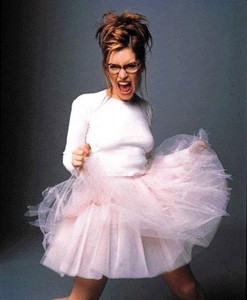 She’s downright handy around the house. Singer and songwriter Lisa Loeb–who scored a modest hit with her 2002 album Cake and Pie and co-hosted, along with Dweezil Zappa, a short-lived cooking program last year on the Food Network–has taped a new segment for the DIY cable channel offering knitting tips. And somehow, between all this domestic bliss, the sexy, bookish Loeb has found time to record a new version of the country-pop song “Don’t Be Stupid” for a recently released Shania Twain tribute album on the Cleopatra label.

Personally, I’m just excited that someone is actually releasing a Shania Twain tribute album (I unapologetically confess that Twain is one of my many guilty pleasures), but Loeb fans will be even more stoked to know that she is making a local nightclub appearance at Sweetwater in Mill Valley.

I don’t know if Loeb–who also has recorded “Gypsies, Tramps and Thieves” for a recent Cher tribute album–will be sharing her vast knowledge of cooking and crafts, or if Cher and Twain will find their way on to her set list, but here’s a chance to get up close and personal with a true pop-music legend.

That’s no hype. In 1994, Loeb scored a No.1 pop hit with the single “Stay (I Missed You),” from the Reality Bites soundtrack, becoming the first unsigned act to top the charts. In fact, that song was the best reason to buy the soundtrack–and, of course, the movie itself bit the big one. Loeb is the only reason anyone still talks about Reality Bites, which was supposed to be The Breakfast Club for Gen X.

Loeb, who hails from the bedroom community of Bethesda, Md., is a Dallas native who did all the things that pampered kids with parents who cherish music education do. She studied piano as a child and later switched to guitar. She attended Brown University in Providence, R.I., where she started playing in a duo with roommate Elizabeth Mitchell, who went on to indie-rock cult fame as a member of Ida.

Loeb moved on to the Berklee College of Music in Boston. It’s easy to imagine her padding around Cambridge with a battered guitar case in her trademark trench coat and black-rimmed glasses, or sitting at a local cafe sipping a mocha latte and reading Camus.

Indeed, Loeb’s music always has had a literate sensibility; the name of her first band, Nine Stories, was an homage to author J. D. Salinger.

The platinum-selling single “Stay” earned a Grammy award and attracted Geffen Records, which signed Loeb and her band in 1994. Their major-label debut, Tails, followed a year later. Critics applauded the album for fulfilling the promise of “Stay,” though some found it a bit sophomoric. Still, there’s something about Loeb’s coy, collegiate persona that endears her to even the toughest critics.

“There is an innocence and naiveté about Loeb that makes her music sweetly ingratiating,” veteran music writer Steven Thomas Erlewine opined in the All Music Guide, “even when her ideas are underdeveloped.”

Smart, literate, adept at crafting low-key folk-pop, and sporting a sexually ambiguous librarian look, the 37-year-old Loeb has continued to pen pensive songs rife with self-reflection while cultivating a cult following in the gay and lesbian community. In the late ’90s, she became the poster child of the Lilith Fair crowd, a familiar face on pre-hip-hop-era MTV and a presence on soundtracks and college radio.

Last year, she reunited with Mitchell on Catch the Moon, an enchanting album of children’s music, and released the critically acclaimed solo album The Way It Really Is (Rounder/Zoe), a mostly acoustic affair that is her best work to date.