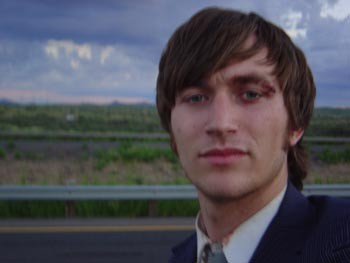 Matt Jones of Life in Braille

When Life in Braille burst on the local indie rock scene six years ago, it was with a strong artillery of powerful sing-along heartbreak anthems full of keyboard hooks and crunchy guitar riffs. Over time, the band have veered into metal and electronica territories and gone through countless lineup changes, but the one thing that has remained constant for Life in Braille is the never-ending plague of shit-talk.

You can mention to people that Life in Braille has an amazing new CD, Fist-Pumping Restraint (Elusive Records), but the litany of comments that invariably accompany the mere mention of singer Matt Jones’ name will only come showering down. Jones is the founder and sole original member of Life In Braille–now just a two-piece outfit with drummer David Weatherly–and in case you haven’t heard yet, he’s got a reputation as a total asshole.

I tend to give incredibly talented people the benefit of the doubt; I have always been in love with Life in Braille’s epic debut release, New York City Ending, and I have always defended Jones from the slings and arrows of the grapevine. Now it’s his turn. I collected some verbatim opinions from people who shall remain anonymous, called up Matt Jones, and gave him the opportunity to respond on his own.

MJ: First off, this is a great idea.

Bohemian: Well, as you know, Matt, your reputation precedes you when it comes to Life in Braille. Uh-huh.

Why do you think the word “cocksure” has been inexplicably linked with your band? Hold on, lemme light a cigarette. You know, I think it’s ’cause I’ve always had a reaction to the whole shoe-gaze-emo meekness. I never felt like it fit me very well. You end up overcompensating sometimes.

Can you explain why somebody else would say, and I quote, “He’s a pompous asshole who can’t fit his head through the doorway”? I guess you can’t really be, like, totally . . . this is tough, man!

I know! Let’s see . . . I don’t feel like you can be sure of what you’re doing and believe in yourself and really do something to the full extent without some people disagreeing with you. If people don’t think I’m doing something cool, then whatever, but the fact is that I believe in it. Also, I’ve played with so many musicians, and there’s a lot of circumstances in which people get kicked out of bands, you can’t help but have a bad reputation.

Well, some of your ex–mdash;band members do have some choice things to say about you. One of them says, “He has alienated the audience by demeaning them.” Whoa. That’s funny. I can’t imagine how I’d be demeaning people by just writing songs. I don’t feel like there’s any lyrics that are like, “Hey audience, you’re stupid,” or that I’m talking down to people.

How about the claim that “he’s a slave driver for precision at band practice”? Well, come on. Who wants a sloppy band? I’ve been in this band for six or seven years, and I started this band when I was 16 years old, and you learn a lot about how to deal with people. Obviously, I’m not the same person I was when I was 16, and I learned a lot of hard lessons by alienating friends of mine in ways like that.

It relates to the statement another person made, that “if he could literally hire a bunch of monkeys to play his music, that’d be great, because that’s what he needs.” Well, that’s why I found my good friend MIDI, that’s exactly the monkey I’ve been looking for all these years. Nah, come on, that’s great and all, but can that really be all that true? Playing with monkeys? Come on, guys.

What about this: “He thinks he’s going to save everyone’s life, but he can’t save his own because he’s too busy preaching.” Whoa! Preaching what? I can’t imagine what I’d be preaching, man. But saving everyone’s life? I think people are getting me confused with Bono.

Now here’s a hard one: “His singing sounds like the Tasmanian Devil. He has this thing where he wants to sound like a black woman.” Oh. That’s actually pretty apt. I think I was talking about that for a while. I was like, “Man, I should be working on my black-woman voice.”

Did that ever involve opening your mouth really wide? Because apparently, and I quote, “the audience thinks he’s going to swallow them with his mouth.” Yeah, well, I have a huge mouth, so that’s totally true. But I can’t help that.

But you’ve been working on your singing? Oh, definitely. That’s why I picked up smoking.

This other person says that “he’s more like a glitching robot than a human being.” That’s a compliment. I’m into that. I dig robots, I dig Kraftwerk. I think that’s cool; it goes with my whole aesthetic.

How do you feel about your wardrobe? I feel excellent about my wardrobe.

Well, there are some people who don’t feel that way, Matt Jones. Yeah, I figured, the way you brought it up.

Somebody told me, in reference to you, “His jackets and pants are too small. He looks like a child who has outgrown his Sunday suit.” I like tight-fitting clothes. Fuck ’em if they can’t take a little package. Didn’t you get any nice quotes from anyone?

Actually, a pretty blonde girl did say that she liked your shoes. That’s cool. I’ve probably got 10 or 12 pairs of shoes.

Is there anything else you’d like to say to all these people? You know, whatever. You can’t do anything without making some people upset with you. Santa Rosa’s such a small town, people inevitably have their motives for not liking you, but like I’m gonna care. I’m a people person; I can deal with people if they don’t like me. It’s not like I’m going to stop doing what I’m doing, or stop being me.

For more information on Life in Braille, check www.lifeinbraille.net or www.myspace.com/lifeinbraille. ‘Fist-Pumping Restraint’ is stellar and in stores now.