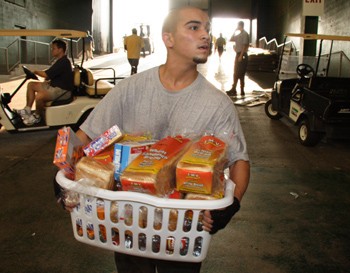 Bread Line: While officials are only too happy to let the media and its own officers photograph relief, despair and death are largely imageless.

The devastation will not be televised

Four days after Hurricane Katrina slammed into the Gulf Coast, the Bush administration lost control. I’m not talking about the staggeringly inept response to the rising floodwaters in New Orleans or the callous disregard for the thousands of people, mostly poor and black, many elderly, who died or withered in the deluge.

Sadly, Bush & Co.’s insensitive bungling was to be expected. What was surprising was that this administration, which had expertly manipulated the mainstream media for more than five years, was flailing in the national spotlight. The lapdog corporate TV networks, from General Electric’s NBC to Disney’s ABC, were asking hard questions and showing some emotion.

On Time Warner’s CNN, straight-laced Anderson Cooper blew a gasket and cut off Louisiana Sen. Mary Landrieu after she thanked the president for his concern. “Senator, I don’t think you quite get it,” Cooper snapped. “The last thing people want down here is a bunch of politicians congratulating one another. People are dying down here.”

Over on the Disney channel, Ted Koppel, one of the last real journalists on TV, ripped (now former) FEMA director Michael Brown when Brown admitted he didn’t know that thousands of New Orleans residents were stranded at the city’s convention center without adequate food and water. “Don’t you watch television or listen to the radio?” Koppel asked in stunned horror.

Three days later on NBC’s Meet the Press, genial Tim Russert went pit bull on Homeland Security director Michael Chertoff, starting the interview by holding up a copy of the New York Daily News‘ headline, “Shame of a Nation” and asking Chertoff if he planned to resign. For a brief, shining moment, it was enough to make Howard Beale proud.

Yet, on that broadcast, Chertoff revealed that while the Bush administration didn’t seem to know how they’d rescue the people of New Orleans, they did have a strategy for regaining some control of public perception. Chertoff told Russert there would be “plenty of time” later for an “after-action analysis.” The following days saw a parade of public officials, from Bush on down, saying it wasn’t time to play the “blame game.”

And the networks seemed to agree. By week two of the disastrous relief effort, most talking heads had backed away from seeking accountability. On the Sept. 11 broadcast of 60 Minutes, Ed Bradley was embedded in a Texas National Guard truck with New Orleans police saying the last two weeks may have been the department’s “finest hour.” There was hardly a mention that a third of New Orleans’ police officers are missing, almost all of them presumed AWOL.

What wasn’t shown–as Bradley referred to those who remained in the city as “armed thugs”–was officers’ rough treatment of suspected looters, some of whom were residents hoping to check on their homes. NBC’s NASCAR-loving anchorman Brian Williams reported that federal troops were pointing their guns at reporters, discouraging them from filming conflicts between police and suspected looters.

“As soon as they realized that the beating was being captured on film, one officer tried to rip the camera off [Oleniuk’s] shoulder,” Harper said. Furthermore, he reported that Oleniuk’s “press tag was ripped off.” When Oleniuk “asked whether he could get his images back, he was threatened with having his neck broken, had guns pointed at him.

“About 350 images that Lucas Oleniuk took will never be seen,” Harper said, “and almost equally as important, ripping off his press tag and leaving him without any press accreditation . . . made him incredibly vulnerable.”

Sound familiar? It should if you’ve been following the news from Iraq. While the networks broadcast stunts like the toppling of the Saddam statue, almost 2,000 flag-draped coffins have returned home virtually unseen. Two years later, U.S. government forces are trying to stop journalists from showing the casualties of the second Gulf war, this one along the Katrina-ravaged Gulf Coast. We can’t let them get away with it.

Sebastopol-based Michael Shapiro is the author of ‘A Sense of Place: Great Travel Writers Talk About Their Craft, Lives, and Inspiration.’