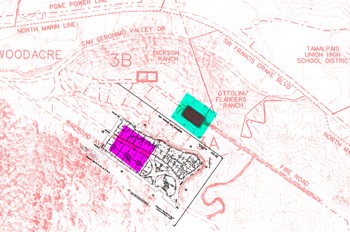 It takes a lot to raise the ire of the locals in the mellow bastion of Woodacre, located at the entrance to the San Geronimo Valley in rural West Marin. But the prospect of tearing up Blueberry Ridge to build a 10 million gallon water tank is enough to stir things up–and to create a public-relations nightmare for the Marin Municipal Water District (MMWD).

One issue centers around excavation of the site and the estimated 10,000 truckloads or more of dirt that must be removed, a number said to be a low estimate. Locals are worried not only about the noise and rubble from the semis that will rumble down a road near their community, but also about the impact this will have on traffic along Sir Francis Drake Boulevard, the only route in or out of the valley.

San Geronimo Valley Planning Group officials estimate that the traffic will equal one truckload every five minutes on the temporary road for two and a half months. Additionally, environmentalists challenge that the construction will be a danger to native fish, whose numbers are already diminishing.

Officials with the MMWD say that the tank, once installed underground, will be virtually undetectable from the town. Locals don’t buy it. While some are willing to take the MMWD at its word, others predict that the football-field-sized tank will be a blight on the landscape.

“As construction projects go, I guess this is not a huge one,” says Ken Naffziger, chairman of the San Geronimo Valley Planning Group’s committee opposing the tank. “However, the impact on the community is enormous. They will build a temporary haul road for the trucks to come in and out of. This is all taking place at a portion of the headwaters, which is home to about 10 percent of the coho salmon in the area. There are also health issues with the dust, dirt, dynamite–and the devastation of the hillside.”

Naffziger says that the MMWD’s $12 million project is a violation of the county general plan, written in the 1980s, and of the San Geronimo Valley general plan, which calls for no residential or commercial development along the ridgetop.

“If this project were somewhere else–somewhere where there weren’t a bunch of houses and people and costs . . . and was out in the middle of nowhere, then it would be an admirable project,” Naffziger says. “But the fact is that it will be sitting right on top of our community. What if something goes wrong? There are questions about whether the place will ever be the same. There are a lot of concerns. The need for the project seems pretty skimpy.”

Paul Hellicker, general manager of the MMWD, says the tank is needed to replace an aging storage reservoir that no longer meets health and safety regulations. Hellicker cites a plan from as far back as the 1970s that calls for phasing out the 3 million gallon Pine Mountain Tunnel reservoir built behind Fairfax around 1920, due to its open atmosphere and groundwater inflow. Hellicker added that the district had looked at several other locations in West Marin before deciding on the Blueberry Ridge location. The reservoir mostly serves central Marin.

“When you have a treated water storage area, you have to isolate it from the rest of the environment,” Hellicker says. “Another reason [for the tank] is that we need to be able to operate the San Geronimo treatment plant [outside of Woodacre] in a much more constant manner than we do now. The plant would be more effective if the fluctuation flows were more constant than they are now.”

Adding to residents’ consternation is the notion of eminent domain and the MMWD’s stance that its powers “trump” those of the Marin County Board of Supervisors. The MMWD is allegedly able to condemn land and build on private property without landowners’ consent, as one MMWD official stated in a 2004 standing-room only meeting.

Hellicker says his hope is that things don’t go that far. He adds that the MMWD’s position does not violate any county plan. Work on the project, if and when it gets under way, is expected to take as long as 18 months.

Hellicker acknowledges the increase in truck traffic during the initial months as dirt is hauled out, but says that the amount of semi-trucks hauling dirt on Sir Francis Drake Boulevard would only make up about a 1 percent increase in traffic on the road, including driving semis through the tiny and often congested town of Fairfax.

Naffziger says that many valley residents feel that the MMWD’s rhetoric is disconcerting. And he chuckles at Hellicker’s 1 percent traffic figure. “My response is that statistically it might be true, but if you are equating semitrucks going over White’s Hill or east towards Nicasio with a Volkswagen or other modern vehicle, then it’s a flawed comparison.”

Hellicker says that such a project in any community in Marin is bound to draw criticism, but he maintains that the project is for the greater good.

“The direct benefit to the valley is that this tank will provide extra storage in case of an emergency,” Hellicker says. “Look at New Orleans, where they were running out of fresh water. Currently, we have an ability of two to three days of storage. With the new tank, we would have seven to 10 days.

“Our mandate is to provide clean water and safe water to all of the residents of our district,” Hellicker says. “This tank will last a hundred years.”