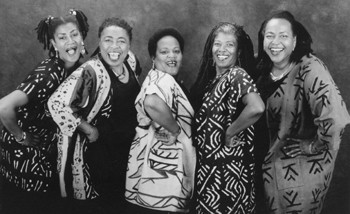 Amazing Graces: The Cultural Heritage Choir bring the sounds of the old slave spiritual into the 21st century.

Linda Tillery sings of the joy after pain

The response, that first time, was overwhelming,” says singer and musical historian Linda Tillery. “It was as if people had been waiting to hear and to see something like this. Our fires were burning pretty strongly.”

Speaking in her thrilling alto tones by phone from her Oakland home, Tillery recalls her first full performance of all African-American slave-era folk music over 11 years ago. After decades spent working the clubs and cabarets of San Francisco, where she variously performed with Bobby McFerrin’s innovative Voicestra, the Zazu Pitts Memorial Orchestra, and as a soloist, Tillery had her interest in African-American roots music (old work songs, slave chants, field hollers, and spirituals) ignited after hearing field recordings from the Library of Congress.

The flame of inspiration was fanned ablaze after Tillery caught a PBS broadcast of a concert featuring opera divas Jessye Norman and Kathleen Battle singing century-old slave spirituals. “It pushed me over the edge. I can’t tell you how excited I got,” she says. “I knew I had to set about redefining myself and my work.” She quickly pulled together a staged performance of similar songs, which she performed with the Oakland Youth Chorus. “The audience response,” she recalls, “was pretty much over the top.”

The next logical step was to form an official ensemble.

“I said, ‘If I’m going to continue this, I think I ought to have a group to help me sing this incredible music,'” Tillery says. After one gig with an ambitious 11-person ensemble, she streamlined the group to five singers. Dubbed the Cultural Heritage Choir, Tillery and company–Rhonda Benin, Elouise Burrell, Emma Jean Foster-Fiege, and Melanie DeMore– set out to sing, shout, stomp, and clap their own identity into songs that might have been around for a very long time, but were rarely ever heard by modern audiences.

“One of the things about this music that I have learned is that it is enduring,” Tillery reflects. “It has no shelf life. Personalities will come and go, but this music itself–the truth it speaks about, the experience it tells of–all of that is immortal. [This music] has a way of evoking strong emotions in people, ways that commercial music would never be able to do.”

Over the last decade, the choir has taken its music and message to theaters, music halls, and folk festivals all around the world, recording numerous CDs along the way. Local audiences will have a chance to experience this joyful noise when Tillery brings the Cultural Heritage Choir to Sebastopol on Jan. 17 in a rare North Bay concert sponsored by the Redwood Arts Council.

“We are all about preserving African-American folk culture for posterity,” Tillery says. “We are entertainers, but we also believe we are keepers of a sacred trust. I am drawn to this music because it reminds me of what once was and what never should be again.”

Asked to describe what the audience can expect from the concert, Tillery laughs.

“Expect to experience a feeling of hope, a feeling of joy,” she says. “The audience goes through a lot of emotions during one of our performances, but then they emerge smiling. This music, if it’s about anything, is about enduring. It’s about the joy after the suffering. When you leave our performance, you’ll leave feeling good.”