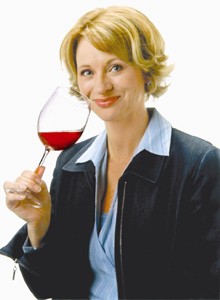 Snob Repeal: Petaluma writer Leslie Sbrocco assures that the language of wine is one that anyone can learn.

Certain bottles contain more questions than they do genies. How many glasses, for example, are actually in the average bottle of wine? Which wine, exactly, goes best with macaroni and cheese? How much wine should you buy when throwing a party? And once that party is over, what can you do with the wine that’s left over in those half-empty bottles? (Wait! Leftover wine? Where we come from, that’s alcohol abuse!)

Such practical, nuts-and-bolts questions crop up in everyday situations, but you’d be hard-pressed to find answers in your average wine guide or fancy-pants collectors’ text. Fortunately, there is one fearless aficionado who has produced a book that wrestles with down-to-earth wine matters and does so in understandable language.

The opposite of intimidating, Petaluma resident Leslie Sbrocco’s Wine for Women: A Guide to Buying, Pairing and Sharing Wine is fun, packed with humor and clever ideas. Operating from the radical notion that wine is not to fear or revere but to simply enjoy, Sbrocco decided to aim the book at women, because statistics show that, contrary to common assumption, the majority of the wine purchased in the United States is selected and paid for by women. Until now there’s never been a mainstream book that acknowledges this or sets out to provide women with the basic facts necessary to become confident wine consumers.

Evidence suggests the book was long overdue. Ever since the publication of Wine for Women in November, Sbrocco has been inundated with media requests from around the country. She’s appeared on The Today Show and CNN; has been featured in Oprah’s O Magazine, USA Today, Glamour and Country Living; has signed books and hosted tastings in bookstores, wine shops and cooking schools from coast to coast; and will be the keynote speaker at the International Festival of Wines in Washington, D.C., next month.

Remember that leftover wine question? Sbrocco’s advice is sensible and practical: she suggests freezing it in ice cube trays to save for use in making sauce. Women tend to adore her. At a recent Thursday night book signing and lecture in Kentucky, two young women actually confessed to missing Friends in order to come and meet her. The way things are going, Sbrocco is well on her way to becoming the nicer, scandal-free Martha Stewart of wine.

When Sbrocco appears for an afternoon interview, she cradles a bottle in one arm–it’s a 2000 Sangiovese from Valley of the Moon Winery. She helpfully describes it as having a medium body and a nice little spicy kick. “I like it with pizza,” Sbrocco says, “or anything Italian, and with burgers.”

How about with macaroni and cheese?

“This would go great with mac and cheese!” she exclaims, further explaining, “What I like with anything cheddar is either a nice zesty Merlot or something like a Sangiovese red, because you need something that’s kind of hearty. Macaroni and cheese has got a little bit of weight, it’s got some texture to it, so you can’t have some light, fluffy little wine. You need something with substance. I like a red for this because you also need something with some acidity to it, to help cleanse your palate after the cheese.”

Such on-the-spot food and wine pairings have become one of Sbrocco’s most popular tricks. The book is full of them–detailed descriptions of which wines go with which foods–but at every public appearance, she’s asked to pair something new.

“I’ve even been asked to pair Twinkies,” she laughs. “I suggest a nice Gewürtztraminer as a great Twinkie match.”

What about Ho Hos?

“Ice wine,” she smiles, “made in Germany and Canada, and also Michigan and Washington. Ice wines are great dessert wines, really crisp and refreshing, not overly sweet, though some of the German ice wines can be really rich.”

Believe it or not, she gets these kinds of questions all the time.

“One I get asked a lot is what wine is the best wine to have sex with,” she says, laughing again. “I tell them it’s up to individual taste, but for me, Champagne does the trick.”

Sbrocco has had a healthy appreciation for wine ever since childhood. Raised by world-traveling parents and often living overseas, she was allowed to enjoy a sip of wine now and then at dinnertime, the way that Europeans do. Her professional connection to wine came about more or less by accident.

As a young woman of legal-drinking age, she was very involved in theater and acting, having attended American Conservatory Theater classes and performed in numerous theater productions, television commercials and one made-for-TV movie (The Man Next Door, starring Michael Ontkean, Annette O’Toole and Pamela Reed; it still plays on Lifetime). After growing tired of waiting to hear from casting agents, she made a brief stab at law school, but then formed her own production company to write and produce industrial films. On the side, her passion was always wine.

“Wine was a big geek-thing for me,” she admits. “I read every book I could get my hands on. I took classes. I visited wineries all the time. Before I got married, every date I had, I’d drag them up to wine country.”

Eventually, she decided to marry what she loved with what she did, and began making training films for wineries and producing wine-related specials for public television. Ultimately, she was asked to help start a wine-focused web site. Titled WineToday.com, it was purchased by the New York Times company, and developed into an internationally scoped database for wine drinkers, amateur and expert. Her wine writing has since appeared in too many magazines and newspapers to count.

All along, Sbrocco was aware that women were treated as also-rans in the wine world, despite the growing number of women who were buying and drinking wine. In restaurants, women still get treated as second-class citizens.

“I hear it all the time,” Sbrocco says. “Women say it to me constantly. They go out to eat and their husband gets the wine list. Even if the woman is the one who ordered the wine, the man is the one who is asked to taste it when it’s brought to the table. It still happens to me a lot, but my husband just laughs and says, ‘Pour it for her, she’s the expert.’ That kind of thing is happening less in San Francisco and Chicago. But it sure happens in New York and a lot of other places.”

Perhaps that’s part of the reason that so many women feel uncertain about themselves when it comes to trusting their winetasting instincts. Sbrocco says when women approach her at public events, they often seem embarrassed.

“They’ll say, ‘I love wine, but I’m so sorry, I don’t know that much about it,'” says Sbrocco. “I ask, ‘Why are you apologizing? You’re just starting out. Nobody’s born knowing this stuff! There’s no reason you should know it. You don’t need to apologize for not knowing about sex when you started that, right? If you love it, empower yourself with a few things you need to know to start.’ That’s why I decided to write this book–to try and make it easy for women for go out there and be confident consumers of wine.”

When asked if women tend to prefer different wines than those favored by men, she insists–nicely, but firmly–that such gender-oriented favoritism is a myth.

“In the research I’ve done,” she says, “there’s no proof that men and women are any different when it comes to the kinds of wines they choose to drink. Women don’t, as a collective gender, prefer whites to reds, or sweet wines to dry wines. That’s just not the way it is, though it is true that, because women have a higher sensitivity to aroma– in other words, because they have a better sense of smell–and because smell affects taste so much, some women are more sensitive to tannic red wines. On the other hand, I’ve talked to plenty of women who just love the big old beefy Napa Cabernets.

“Ultimately, if you don’t get hung up on all the complicated stuff, wine is a matter of taste,” she says. “My book uses women’s language to assure women that they don’t have to get hung up on it.

“Wine, like all the good things in life, is there to enjoy.”