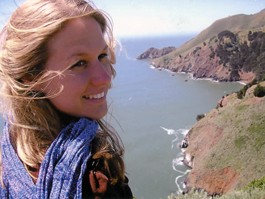 Some time ago, in the not-so-distant past, a waitress at an upscale Cuban restaurant decided to put down her serving tray and pick up a guitar. “I would have something that gave me endless vitality, something that helped me through joys and sorrows, a constant through inconsistency and a blessing to pass on to everyone else,” says Philadelphia-based singer-songwriter Birdie Busch of her decision to leave behind the world of steaks and platters for the world of songwriting and creativity.

Busch makes a stop at the Orchard Spotlight on Feb. 7 as part of her U.S. tour. Joined by a full backing band made up of local Philly musicians and friends, Busch’s songs exude a classic, warm living-room Americana-sound—think Lucinda Williams without all the whiskey and cigarettes. In an Auto-Tune pop universe, the Collingswood, N.J.&–bred musician provides an honest dose of solid, simple songwriting. Listen to the charming hooks on the song “Mystical,” from the 2007 release Penny Arcade, whistle along with the sunny chorus and be cleansed of any residue left from 2008’s gagtastic proliferation of robotic, dead vocals.

A buzzed-about artist in Philadelphia, Busch has opened for Regina Spektor, Amos Lee and Dar Williams. She’s just wrapped up recording on her third album, with the help of band member and producer Craig Hendrix. “I love witnessing the quality of music that comes about when people are thrown together because they are neighbors and friends, believers and musicians,” says Busch on her MySpace page, “all able to have this dialogue that somehow seems more intimate.”

With such bright horizons, it’s no surprise that the woman who has received critical praise from the Village Voice, Harp and No Depression is an optimist. “I want to be like sunflowers and not a midnight rose,” she sings on “Go Go Gadget Heart,” a sweet little ditty about love and yearning, and those of us who tend to seethe glass as half empty can join Birdie Busch for a second in believing wholeheartedly that it might be half full.