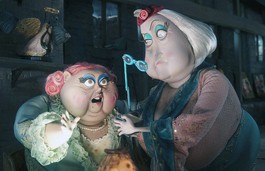 Children under five might want to be elsewhere, but everyone else with a fanciful streak should love Coraline, a stop-motion animated masterpiece by Nightmare director Henry Selick.

Adapted from the Neil Gaiman book, the story contains elements from Alice in Wonderland and E .T .A. Hoffmann’s “The Nutcracker and the Mouse King”; there’s even a spot of help from Keats’ poem “La Belle Dame Sans Merci.” In 3-D, this is a fascinating and strangely beautiful tale.

A bright-blue-haired Oregon girl discovers a magical portal and takes up a chimerical parallel existence just on the inside of her new house’s wall. Coraline, voiced by Dakota Fanning, could use some escape. Her blue hair is the sharpest color in a muddy landscape soaking in the worst of the spring rains. Coraline’s house is a pale-pink Victorian in the outskirts of Ashland. The plumbing is bad, and water bugs and centipedes wriggle out of the woodwork. Her parents work at home, drudges chained to their computer keyboards.

Coraline pays little attention to her neighbors, theatrical retirees who were likely drawn to Ashland by the Shakespeare Festival. In the basement apartment lives a pair of broken-down English burlesque artists (Jennifer Saunders and Dawn French). The ladies live with a horde of Scotties, most of whom are dead. The tenant above Coraline’s place is a bulgy Russian acrobat (Ian McShane). Nearby, a boisterous kid named Wybie roars around in the mud on a minibike. He’s adopted a beat-up stray cat. Coraline has little use for the boy and his pet.

Exploring her house, Coraline finds a locked crawl space. When she at last breaks through, she discovers a glowing blue tunnel. At its other end, her Other Parents are waiting for her. They’re sweet and attentive, and there are no dismal computers in sight. They load Coraline’s plate with cakes, flatter her and tend an animated garden of plants celebrating her existence. The only hitch is that this Other Mother and Other Father have shiny black Raggedy Ann-style buttons for eyes. Coraline’s help in the trouble to come is the skeptical feral cat, voiced with lovely insinuation by Keith David, who goes as he pleases between worlds.

If Selick has something in common with Tim Burton, it’s the Burton of Beetlejuice. Troubling changes of size occur in the fantasy world, in the same way that the zebra-striped demon Beetlejuice was sometimes man-size, sometimes a scuttling mouse. The revelation of the Other Mother’s true self comes with a startling change of size and proportion. Selick’s plays on both sides of the line between the uncanny and the cute; asymmetry and strange angles rule the creatures in the fantasy world.

Coraline is girl-centric. Perhaps it was the thousands of Goth (or merely off-beat) girls out there who responded the most deeply to Skellington and Sally. The changing rapport between mom and daughter (as well as between the not-mom and not-daughter) makes this a very womanly tale. The men are off to the side in a power struggle among maiden, mother and very bad crone.

Watching fairy-tale films, too often you’re tensed up, worrying that you will be fed a trite motto that will spoil the pleasure. Coraline has its moral, an Old Country one: Those who gorge us on sweets may not have our best interests at heart.

But Coraline‘s symbolism seems artful and troubling, rather than simple. As in the Grimm Brothers stories, there’s something very pagan in Coraline, something that doesn’t jibe with our feelings that good always defeats evil. Rather, it insists that cleverness and a little treachery is always needed to save our skins.