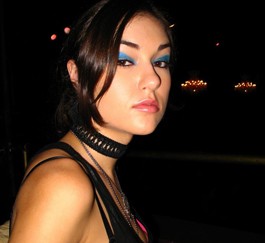 Grey, a left-handed guitarist, has joined the experimental music arena this month by releasing a limited-edition clear-vinyl 7-inch with her noise duo, aTelecine. She calls it an “experimental-death-dub-orgasm kind of project.” With six tracks and collage artwork by Grey herself, the record’s first run of 300 copies sold out quickly in preorders. The Brooklyn-based Pendu Sound, who released the 7-inch, also sells LPs and cassettes by art-noise groups equally influenced by John Cage and Slayer; they plan a cassette-only release with aTelecine in the near future.