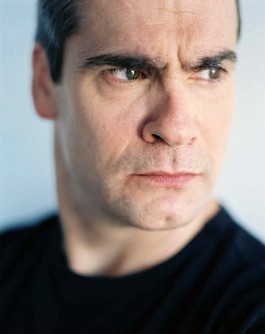 The good, the bad, the ugly, the real: Henry Rollins embraces it all

Like his cultural antithesis Madonna Ciccone, Henry Rollins is an expert at transformation. Debuting as the tattooed and muscle-bound singer for legendary punk band Black Flag in 1981, now an activist and world traveler edging toward 50, Rollins has lived at least nine lives. After Black Flag’s breakup in 1986, he hit his stride in the Rollins Band; in another incarnation, the literature aficionado established the publishing imprint 2.13.61, releasing his own poetry and tour journals along with books by Nick Cave and Exene Cervenka. After being designated “Man of the Year” by Details magazine and winning a Grammy for Best Spoken World Album in 1994, he played Hollywood with parts in films like Lost Highway and guest-hosted on MTV.

Refusing to sink into obscurity, Rollins has entered the 21st century with a bang. He produced a Saturday-night radio show for Indie 103.1 and briefly morphed into a talk-show host with The Henry Rollins Show, featuring guests like Sleater-Kinney and Werner Herzog. Through it all, he has been an inveterate spoken-word and USO performer, entertaining troops in Iraq and Afghanistan, as well as a documentary filmmaker, recording his own concerts in New Orleans, Israel and South Africa.

On the phone from Los Angeles where he lives, Rollins is friendly and open. This comes as no surprise since no topic is off-limits during his speaking tours. Cultivating a mix of social critique, political analysis and personal narrative, Rollins brings his scathing observations about everything from Burger King in Beirut to dating in La-La Land when he appears at the Wells Fargo Center on Feb. 7.

“I’ve always had fun with the dating thing onstage, because it’s always been so difficult for me to meet women,” Rollins says with a laugh. An outspoken advocate for gay rights, with refreshingly feminist inclinations, Rollins has learned to look for the true beauty in women. “It took me a while to where the looks didn’t matter so much as, well, I want to be friends with this person, and that makes them sexy. I’m seeing a different kind of beauty,” he says.

Strong opinion is a trademark of a Rollins performance. Current material is culled from his recent travels to Saharan Africa for the Desert Music Festival, and includes observations about experiences in Tehran, Syria, Lebanon, Burma, Vietnam, Cambodia and Thailand.

“You see the commonalities more than the disparities. Peace is a true north for people, some kind of stability,” Rollins says about traveling the world. “People might be ‘dipped in dirt,’ but they are vigorous, they’re working everyday. No matter where you go—Ho Chi Minh City, Islamabad, Pakistan—people are trying to get ahead, they’re striving towards dignity and peace.”

The recent transition of presidential power, an experience Rollins likens to being “in fifth gear in a Maserati going down the Autobahn, when before the mule didn’t want to get out of the gully,” will also come into play.

With a mix of humor and pathos, Rollins skirts the line between standup comedy and angry political commentary, but he resists being characterized as a comedian. “When I’m onstage sometimes, I will kind of trip over humor, or it follows me home like a dog, and sometimes when you’re talking about meeting 23-year-old boys with 60 percent of their brain removed who will spend the rest of their lives in diapers changed by their mom, there’s no humor there,” he says, in reference to lessons learned from touring military hospitals like the Walter Reed Army Medical Center.