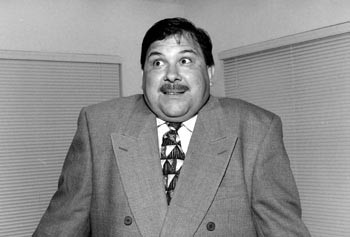 Last of the Red Hot Lovers

ONCE ITS GLOW-PLUGS are warmed, River Repertory Theater’s production of Neil Simon’s uproarious comedy Last of the Red Hot Lovers has all the torque and combustion of a diesel engine.

Directed by Tiana Lee, the play is a snapshot of the sexual revolution’s diaper days as observed by one Barney Kashman, a middle-aged seafood restaurateur living in New York City in the late ’60s. Barney (excellently deployed by Ed Brown) is financially successful and, by all accounts, happily married–yet he pines for the intrigue of an extramarital encounter.

Set entirely in his mother’s East 30s apartment, replete with Naugahyde sofa bed and rotary phone, each act introduces a new woman with whom Barney attempts to commit infidelity. The results are varied and epiphanies abound.

Brown draws Barney as a goosy, handwringing, overgrown teddy bear, managing to engender empathy rather than contempt for the would-be adulterer. Barney is not ignoble; his lifelong monogamy and faithfulness have simply left him understandably curious.

In Act 1, Barney conspires to meet the trashy, hard-boiled Elaine Navazio (capably played by the gum-smacking Debbie San Angelo), who has made a delusive pastime of her own infidelity. San Angelo manages to depict the character’s romantic resignation with a world-weary coolness despite the little chemistry between her and Brown.

By the second act, however, the show truly ignites when gorgeous, frenetic London Sawyer makes her stage debut as dingbat, schizoid Bobbi Michele, a wannabe actress and cabaret singer who lets on to being the hapless dupe of many a libidinous machination.

Sawyer portrays Bobbi with dizzying energy–preening, pouting, and sashaying about the stage, a sort of Marilyn Monroe­meets-Peter Pan­on­the ­back-lot of Laugh In. Sawyer is a real discovery for SoCo theater.

Jeanette Fisher is admirable in the role of Zelda Michaels, a depressed married woman who claims to have enjoyed only 8.2 percent of her life. Zelda, a friend of Barney’s wife (whom we never meet), thwarts Barney’s advances by constantly clutching her handbag and braying morosely about the shambles that her marriage has become. Fisher, returning to the stage after an absence of several years, makes a considerable comeback here, playing Zelda as a wide-eyed, stricken, and defeated woman whose revelations play genuinely with only granular evidence of schmaltz.

Director Lee and Ricardo Zelaya share credit for the subtle lighting design, and the set, a joint effort devised by Lee and Terrence Sherman, effectively replicates a cozy studio apartment rigged with nooks and passages that optimize the stage’s tight quarters.

Last of the Red Hot Lovers is a fine play that flourishes in the apt hands of River Repertory Theater–well worth the scenic drive to Jenner.