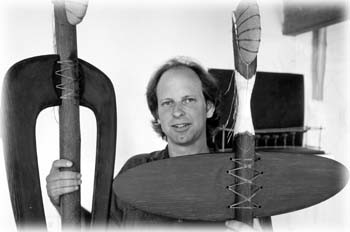 KURT STEGER’S STUDIO is located in what seems curiously to be the fish-packing district of Santa Rosa. The intrigue of discovering such a cityscape, cement-locked far away from any seagoing docks, almost distracts from such mundaneness as address. But a totem standing in Steger’s evolving Zen rock garden is sufficient to catch the eye. Knowing that Steger was a friend of the late and much-beloved assemblage artist Raymond Barnhart, one assumes that this must be the place, and that work must have been Barnhart’s.

One is always liable to make mistakes. For while this is the place, the totem isn’t Barnhart’s. It’s Steger’s, a piece that reflects–along with a few others–the power of the master artist’s mentorship.

An emerging artist with three years of single-minded devotion under his belt, Steger is being given the rare opportunity to mount a one-man show of his wood, rock, grass, and mud sculptural objects at the Cultural Arts Council’s SoFo 2 Gallery.

In CAC staffer Barbara Thoulion’s memory, only two other artists–the venerable abstract painter Horst Trave and well-regarded en-plein-air painter Jack Stuppin–have had such an honor. Titling the show “The Walking Stick Project,” Steger is deepening that trust, dedicating the exhibit to Barnhart’s memory.

“I wanted to do a show for Raymond,” Steger says simply, standing inside the organized garage that serves as his studio. “He was such an inspiration to me.”

Pointing to an elegant, found-object mingling of elements assembled into a piece hanging on the wall outside his studio, Steger explains that he had been fooling with the components of this assemblage piece the day of the 93-year-old Barnhart’s death in a freak auto accident last year, but had decided not to build it because of its resemblance to his friend’s work. When the sad news reached him, he changed his mind. “I said, ‘This is going to be just the way that it is,'” he remembers. Then he named the work “Raymond.”

Trained as a maker of cabinets and other furniture, Steger has respect for the elements of wood and of traditional style. He does little assemblage now, focusing instead on a progression of structures that began with what he calls “Altars to the Earth,” built along plumb lines, featuring the juxtapositions of rocks suspended in an exploration of space between the clean lines of wood. He then moved to what he terms “ritual” pieces, wooden structures that have been carefully burned, retaining both the markings of the fire and the intent of the artist to imbue the work with meaning and metaphor. And now he’s making–well, he’s not quite certain what he’s making.

“Now I am going to someplace that I’m not sure of,” he admits, beginning to draw down from their ceiling storage the large, wooden staffs he has fashioned for his one-man exhibit. “There’s something that feels really wonderful about these,” he says, stroking the smooth wood. Taller than most humans, the staffs have plate-sized “heads,” and the easy carriage of Masai warriors.

“They have a real primitive sense to them,” he says. Pointing across the studio to a darkened stairwell in which hangs one unfinished stick, her wood unsanded, white, and raw–her head unrealized–he says, “They’re all in pairs except for this one. But she’s standing her own ground. She seems to be watching over everything; she’s a very powerful force in the shop.”

Having begun “her” as the mate to another stick, Steger found himself unable to finish. Will he ever?

“I think I will,” he chuckles. “I’ve got a fish that goes on her head, and she’s a lot easier for me to deal with when she’s got the fish. My relationship to her is very strange. It took a lot of effort to get this far. That one over there was supposed to be her husband,” he points. “But he just couldn’t compete.”

Having lived a full professional life as a journeyman craftsman, Steger is now coming to terms with the artistic life. “My first pieces, the altar pieces, were really figured out–it’s just the nature of the pieces, to cut all the pieces of wood,” he says, hoisting a walking stick back up to its aerie. “And that’s changing. I’m getting to the point where I can just make an element and let it sit and become something else.”