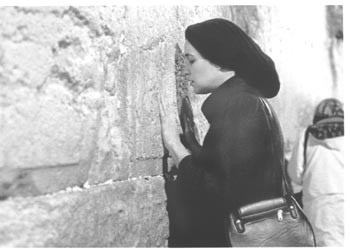 Woman on the verge: Yaël Abecassis approaches her breaking point in Kadosh.

Ultra-orthodoxy takes a toll in ‘Kadosh’

TWO WOMEN conjure up very different responses to the crushing weight of religious extremism in Kadosh, a film from acclaimed Israeli director Amos Gital that opens the fifth year of the Sonoma County Jewish Film Series. Set in the ultra-orthodox community of Jerusalem’s Mea Shearim district, Kadosh (Hebrew for “sacred”) enters the world of two sisters just as their community’s harsh traditions bring their lives to the point of crisis.

The younger sister, Malka (played by the irrepressible Meital Barda), has a slightly different problem. Her parents and the community in general are pushing her to get married, but she doesn’t want to. It’s not just that her proposed husband, Yossef (Sami Hari), the rabbi’s faithful helper, is an insensitive clod, or that she’s in love with someone else. It’s that she’s not into the idea of spending the rest of her life pregnant and subservient, working to support her husband as he goes off to pray.

Indeed, one look at Barda’s crooked little smile and dancing eyes tells you that she’s not likely to hew to orthodoxy of any kind.

Still, Yossef gets his wish and marries Malka. It turns out to be as bad as she expected it to be, but she soon finds ways to make him bitterly regret the union.

But tradition has a stronger grip on her sister, who seems paralyzed as her husband comes under growing pressure to dump Rivka and pick a younger, fertile woman as a new wife. The irony is that when Rivka makes a visit to the doctor, she discovers that it’s probably her mate who is shooting blanks–not that such a scientific assessment of the problem will do her much good, given the male supremacist ideology that permeates her world.

“Blessed is our Eternal God who has not created me a woman,” Meir chants to himself as he goes through his elaborate dawn ritual of dressing and morning prayer. That sentiment eventually overpowers his richly rendered and entirely believable love for his wife, with devastating results.

It’s hardly surprising that this film was controversial in Israel, where it was first released last year. Gitai is known for his leftist documentaries, and the director’s searing take on women’s lives in the ultra-orthodox community burns like a hot iron.

But it’s unfair, as some have done, to label the film a didactic propaganda piece. In truth, the director brings a simple but evocative approach to his subject, and the actors do an excellent job of offering a nuanced portrait of the dramatic clash between tradition and modernity and the ugly human fallout that results.