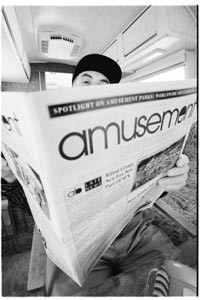 Over the top: Eccentric Sebastopol author C. D. Payne has big plans for the future, including a sequel to his popular novel about the misadventures of trouble-making teenager Nick Twisp.

As a new Nick Twisp novel hits the shelves, the author ponders becoming a carny

“I’M SERIOUSLY thinking of becoming a carny,” announces author C. D. Payne over a tofu-laden lunch platter of steaming Thai food. “I don’t know, maybe it’s a midlife crisis thing, but if my writing career doesn’t work out, the fair-and-carnival trade might be what I go into.” He’s joking, of course.

Here’s the thing about C. D. Payne: when encountered in person, the 51-year-old Sebastopol author is not easy to read. Though kind of shy and definitely likable, he’s also a bit mysterious.

For a guy who is worshiped and revered by raving hoards of international teenage literati–fans of the author’s outrageously subversive 500-page 1993 novel Youth in Revolt: The Journals of Nick Twisp–Payne is remarkably low-key. His soft-spoken manner and deadpan delivery make it nearly impossible to tell when he’s serious and when he’s kidding.

“I’m not kidding,” he now insists, bemusedly defending his chuck-it-all-and-join-the-circus threat. “I’ve actually been subscribing to Amusement Business for 10 years. I have this one idea for a carnival concession that could make a lot of money.”

But he will say no more, arguing, “It’s such a good idea. I don’t want anyone to beat me to it.”

Asked to at least reveal the category of attraction he’s contemplating–is it a game? a ride? a snow cone stand?–Payne cautiously says, “Well, it’s more like . . . an exhibit. People would pay me a dollar, and I’d let them go through the thing. It would appeal to kids, I think, so their parents would have to fork over the money.”

Smiling, he forks up another bite of tofu, clearly aware that he’s effectively just presold the first ticket to whatever it is he’s planning to do. I’ve read the man’s books (and still have the scars to prove it). I can’t wait to see behind this carny-booth curtain.

THOSE WHO’VE worked with the Ohio-born author over the years will surely recognize this passive-aggressive sales job as a classic C. D. Payne attack. With his aptitude for grabbing one’s undivided attention while simultaneously saying as little as possible, Payne is like a cross between P. T . Barnum and Marcel Marceau.

“He’s a natural-born promoter,” agrees Santa Rosa director Carl Hamilton, who brought Nick Twisp to life a few years back with the hit San Francisco staging of Nick Twisp: Youth in Bondage. “C. D. Payne knows exactly how to build interest in his projects. He’s worked hard to learn how.”

Indeed. Payne self-published Youth in Revolt, his first novel, effectively hand-selling the thing until strong word of mouth and good sales led to a major rerelease by Doubleday and a subsequent string of stage and radio adaptations around the world. The TV rights were sold to Fox, which shot a pilot but sold the idea to MTV, which announced a plan to run Nick Twisp as a late-night miniseries.

Unfortunately, that project was halted when the show’s head writer fell from his own boat and drowned, which sounds like something Payne would write, but didn’t.

The author’s subsequent books–Civic Beauties (a “musical” novel about presidential politics) and Frisco Pigeon Mambo (with talking laboratory animals)–have also been self-published. The latter, a book Payne refers to as “America’s first great pigeon novel,” has been purchased by the Farrelly Brothers, who are producing it as a computer-animated film from Twentieth Century-Fox.

Let’s all hope the Farrellys stay away from boats for a while.

For Nick Twisp fans, here’s the best news of all. In October, Payne will release the long-anticipated Revolting Youth: The Further Journals of Nick Twisp. And once again, Payne is self-publishing.

“My old editor at Doubleday left the company,” he explains. “The editor that inherited me, well, I’m not really his cup of tea. When I mentioned the sequel, he said, ‘Oh I think one Nick Twisp book is enough.’ ”

Not to Payne’s readers it isn’t.

“I get e-mails from people, mainly teenagers and college kids, every week,” he says, “asking me when I’m doing another Nick Twisp.” Happily, advance sales, mainly through Payne’s nicktwisp.com website, have been brisk. “I hope Nick’s fans won’t be disappointed.”

They won’t be. Nick, the recently deflowered 14-year obsessive diarist, is the same ingenious, self-interested, alter ego-assuming troublemaker of epic proportions that he was before. The FBI is still hot on his heels (he once burned down half of Berkeley, by accident), and he is still hiding out in Ukiah, disguised as homely, fashion-challenged Carlotta Ulansky. One change is that, like Payne himself, Nick is attempting to adopt a vegetarian diet.

Though far shorter than the original–a mere 276 pages–the sequel packs a comic wallop that will probably be met with enthusiasm and demands for another book.

“In some ways, Nick is slightly more mature in this book,” says Payne, quickly adding, “but not a whole lot. He’s still the same guy. The fun thing about Nick is he has a very low filtering between his impulses and his actions. That makes him fun to write. Nick does all the things I never had the courage to do when I was his age.”

Given Nick’s proclivity for pretending to be other people, one has to wonder if Payne has dreamed of exploring the world of public alter-ego portrayal. Does he ever, for example, adopt a fake English accent and go out drinking, stuff like that?

“Well, you have to remember that I’m from Ohio,” he replies. “In Ohio people really don’t do things like that.

“On the other hand,” he continues, after a pause, “I do have this hat that says PALLETS on it, from some pallet company. And sometimes I put on my hacker clothes and go to the flea market. I look like some redneck guy. That’s probably the only disguise I ever wear, and it’s really just an exaggeration of my Ohio background.

LUNCH IS almost over. The tofu is all gone. “You know, for me, the big surprise about the Nick Twisp books is that they’ve appealed to kids,” Payne reveals. “I thought I was writing it for baby boomers like me, so I was totally amazed that teenagers related to it.”

Hamilton, who cites the Nick Twisp play (due for a restaging in Sonoma County next spring) as the one show he’s proudest of, is not surprised by the book’s youthful appeal.

“It insults the senses,” he says. “It goes straight to how kids think about the world. It feels kind of dangerous, and teenage kids are just beginning to recognize that they are a dangerous force. It’s a book that hits home.”

And how do parents tend to feel about their teens’ affection for the nightmarish Nick?

“It’s a book that causes parents some concern,” Payne admits, smiling a bit too proudly. “My advice to parents is this: Buy it for your kids yourself. Present it to them on their 13th birthday. Say, ‘Welcome to your teen years. Don’t do anything in this book.’ ”

Another amazing Twisp phenomenon is the number of kids from all around the country who make pilgrimages to Northern California just to visit the local sites described in the book. There’s an article posted on the nicktwisp website by a young fan who expresses his utter joy at visiting Sebastopol, recalling the magic moment when he passed by the aforementioned Sebastopol flea market, prominently featured in Nick’s misadventures.

“I couldn’t believe it was a real place,” he gushed.

“I got an e-mail from some teenager,” Payne says. “Her family was on vacation, and she made her parents go a hundred miles out of their way just so they could go to Ukiah.” The thought makes him laugh. “I wonder if anyone in Ukiah has ever read my book. Do they appreciate this slight blip in tourism that I bring their way?”

While Payne hopes for success with his non-Twisp efforts, he’s comfortable with the fact that Nick may end up as his most memorable literary creation.

“I realized at some point that, no matter what else I write, Nick Twisp is essentially the franchise,” he says. “I suppose Nick Twisp has put me on the map, however slightly, as a writer, so I thank him for that, and I hope that the story can go on. And on. And on. I could be with Nick for quite a few more years.