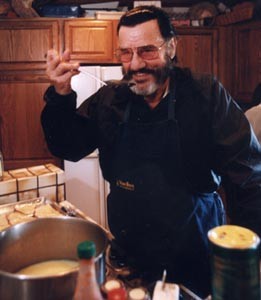 At table with the incomparable Johnny Otis

JOHNNY OTIS’ kitchen isn’t much different than the well-lived-in hearth of any other Sebastopol grandparent’s home. Living with wife Phyllis and grandson Lucky, as well as hosting several friends, kids, grandkids, and great-grandkids on a regular basis, Otis lives in a clean clutter. There are cases of soda stacked up on the counter, a bowl of fruit on the table, gardening gloves lying next to the telephone answering machine, a bunch of dried lavender in a vase, a recorked half-bottle of red wine, and olive oils, Parmesan cheese, canned foods, and other comestibles lining the counters.

This ain’t no regular grandpa.

“OK, kids, time to go to the pig-out room,” Otis intones in his distinctive voice. Wearing a dark windbreaker and blue apron, he lifts up a steaming pot of soup and nods his head toward the dining room. It’s lunchtime.

Today, in honor of his newly published cookbook, Red Beans & Rice and Other Rock ‘n’ Roll Recipes (Pomegranate; $16), Otis is kindly hosting a reporter and photographer at his table, as well as serving up the soup for long-standing chum Cam Parry, the second voice on Otis’ popular Saturday morning KPFA 94.1 FM show. Although an extra hour has been added to the show (it now extends from 9 a.m. to noon), other projects in Otis’ ambitions have shrunk. The church he established at the Luther Burbank Center earlier this year has closed for lack of funds; his long-hoped-for community center, the Johnny Otis Center for the Arts–with its emphasis on health care for underserviced children–is on hold; and his long-standing Saturday night gig at Santa Rosa’s downtown club the Funhouse has been suspended on Otis’ orders. He’ll be appearing regularly at another venue early next year, at a place whose name Otis enjoys keeping shrouded in mystery.

Because even at age 73, Otis is not a man to slow down. With another partner and Parry, Otis is writing You Made Me Love You, a Broadway musical. Set around the Golden Gate Fields horse track in the heyday of the ’40s, this frothy costume comedy spotlights a society gal trying to heal her heart after breaking off with Gary Cooper. A cast album of You Made Me Love You, slated to be recorded with members from the long-running San Francisco production of Phantom of the Opera this fall, features some 24 songs written by Otis.

IN THE DINING ROOM, Phyllis, Otis’ wife of 42 years, declines to eat, but has laid a table with fresh garden roses and a pink cloth, lovely china, and gleaming cups. Ever the lithe young thing, I clumsily push down on the tabletop as I rise up from my chair and, with a lurch of the vase and a sickening sound, the table breaks. We catch it and the photographer squats under the tablecloth tinkering until a bolt is reapplied. Order restored, we sit once again, unfolding our napkins in our laps.

Ladling out the Greek egg-lemon soup with chicken that he’s prepared the night before, Otis, who is of Greek descent, denies any expert culinary ability. “Hey, let’s back all the way up,” he says with a chuckle. “I’m no chef, I just like to cook when someone comes over.” While discussing book ideas with an editor at Rohnert Park’s Pomegranate Books publishing house, the idea for Red Beans & Rice just popped out of his head. When the editor jumped, Otis had to, too. Calling on friends and family, he devised a 120-page tome to rock-‘n’-roll cooking on the road and friendly, easy eating at home.

“Those are not all my recipes, you understand,” he says, taking a bite of the salad with Kalamata olives, baby corn, fresh greens, and cherry tomatoes that Phyllis has prepared. “But through my trips through the South [in the ’40s-’50s with his all-African-American band], if the town wasn’t big enough to support a black hotel, we had nowhere to stay. Nowhere to eat.”

Carefully drizzling olive oil over a slice of feta cheese, he continues. “The promoters would arrange for us to stay in black homes. And when that happened, very often it was in a rural area, where we’d be in a farmhouse and there’d be all kinds of good smells coming from that kitchen, and I’d just go into that kitchen and hog that kitchen and ask them [about the food].

“Because there’s no one that can cook that pastry and that soul food the way that they do down in the South.”

Unless, of course, they happen to be in a hotel room–anywhere in the United States. Living tight, Otis and his band quickly grew tired of the high prices and low satisfaction of restaurant food while on the road. That’s when transportation manager William “Blik” Avant took over. Traveling with two suitcases devoted to nothing but hot plates, pots, pans, and seasonings, Blik cooked nightly for the band, wet towels pressed against the door to keep the illicit smells of room-cooking from seeping into hotel hallways.

“Blik didn’t have to stay up until 3 in the morning playing a gig,” Otis explains, supping his delicately flavored, yellowy soup. “So, he’d get up early and prepare a lot of nice things.” In a Red Beans & Rice aside, Otis reports the instance when an angry hotel manager became so swayed by the smells of the steak smothered in onions, fresh collard greens, and apple cobbler Blik had prepared in one of his rooms that instead of booting the band out, he stayed for dinner–every night for the following two weeks.

We eat for a long time. Garlic toasts appear and are eaten. Herb-inflected feta cheese is offered, fresh lemon slices passed, and more chicken proffered to complement the soup. Dessert is “jive pie,” an apple wonder in a homemade crust that this songwriter, whose ’50s hit “Hand Jive” has out-clapped many other songs of the era, had made earlier in the week and then protected fiercely from his household tribe. Of course we have ice cream.

Otis’ property includes the aviary where he keeps his 100 or more fancy pigeons (he used to tend some 800 birds and now considers himself frugal in his collecting); the koi pond protected by statues of the Three Tons of Joy–former backup singers whom Otis, a painter and sculptor with a fiercely primitive appeal, has immortalized in kinetic plaster–the life-sized figures frozen in mid-dance, naked and huge and bearded with cobwebs; the recording studio; the art studio; the apple orchard; the rehearsal space; and that small hillside just to the west of the house where two ostriches are kept.

As we wander outside after the still-stable table has been cleared, Parry points with a laugh to the large fishing boat that dominates Otis’ back driveway. “Tell her about when you bought this,” he prompts. Otis chuckles.

The dealer had an itch in his brain about Otis’ name. He knew that he was Someone. Was he involved in the music industry? Yes, Otis nodded modestly. “‘Oh, I know,'” Otis now mimics, wagging his finger in mock excitement. “‘I know! ‘Dock of the Bay!’ That’s my favorite song!'”

Clapping his hands together and digging his heels into the warm gravel of his Sebastopol spread–surrounded by family, friends, pets, his orchards, and his art–Johnny Otis lifts his face to the sun and laughs.