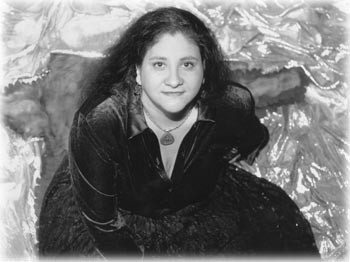 Angel of the House: With 27 produced plays to her credit, things continue to look up for Migdalia Cruz.

THE DRAMATIST’S Sourcebook, a veritable bible for playwrights, is an extensive list of theaters, companies, and their play-submission protocols. For playwrights it brims with possibilities. That’s especially the case for Bronx-bred dramatist Migdalia Cruz. Thumbing through its pages is nothing less than a life-affirming experience for her.

Vital and hardly jaded, the two-time NEA Playwriting Fellow would be hard-pressed to find a page listing a theater at which one of her 27 works has not been produced. On Nov. 14, Cruz will be at Sonoma State University’s Evert B. Person Theatre for the Bay Area opening of her Another Part of the House, a new work inspired by Federico García Lorca’s classic La Casa de Bernarda Alba.

“I like collaborative art, I like the idea of people working all in one room to re-create life,” says Cruz of her craft, during a telephone interview from her Chicago home where she is presently (and feverishly) completing the second act of Che, Che, Che, a Latin fugue in 5/8 time about Cuban revolutionary Che Guevera, due to premiere Nov. 1 at the Latino Chicago Theatre.

Cruz’s trajectory as a dramatist has gone generally unfettered since she was a child and her father constructed her a puppet-theater for which she prodigiously produced plays.

“This was during the civil-rights movement of the ’60s, so I would write all these puppet shows about civil rights,” Cruz, 38, laughs. The human concern prevalent in these embryonic sketches has persisted in the examinations of such themes as oppression and Latin American issues (Cruz is of Puerto Rican descent) that constitute much of her work.

“When I was 8, my best friend was raped and murdered and thrown off the roof of our building. That’s when my serious writing began–when writing became an outlet for me to express my feelings and emotions,” she explains. “That is when I began to understand the power of writing. Other kids played stickball; I’d write weird journal entries.”

An erudite student, Cruz graduated early from high school at age 16, routinely ditching class to scribe “bizarre musicals” with her best friend. She attended nearby City College in Queens at the behest of her parents, despite her desire to “get the hell out of the Bronx.”

Inexplicably, Cruz entered higher education as a math major. Studying drama or writing simply had not occurred to her as a viable option.

Says Cruz, “It hadn’t dawned on me that [playwriting] was a career or calling–a necessity for me.” And then she found the work of Samuel Beckett.

“It really was so clear–that you could use language to express human emotion,” Cruz recalls. “It just seemed like the greatest possible gift. It was like, ‘That’s what I want to do, but how do I tell my parents?'”

Cruz eventually earned her master of fine arts degree in playwriting from Columbia University and later gained her bearings as a dramatist at Maria Irene Fornes’ Playwright’s Laboratory, a professional workshop in New York specifically for Latino writers.

Though she maintains the trappings of much of her training, her creative process is often mitigated by the conditions of the work itself. Che, Che, Che, for example, required copious research that she says was intentionally “forgotten” and then “reconfigured.”

“For Another Part of the House, I was looking at the play of a great poet and saying, ‘Hmm, is there anything I could do here to say something else?'” Cruz avers. “What I wanted to do was write all the unspoken stuff that he didn’t write–what I thought was underneath the play. I felt that I wrote around the subtext and its viscera as opposed to its outside world form.”

She pauses. “I felt like I had to light candles to him every day and keep asking him to forgive me.”

That theater productions are necessarily wedded to the ephemeral appeals to Cruz. For her, theater is not about building monuments so much as memorable sandcastles.

“It makes it very intense and very passionate to be involved with something so temporary–it’s like falling in love. It only happens for a couple weeks, then you just have love,” she says wryly. “That ‘in love’ thing is very exciting, and I feel that playwriting is kind of like that.”

Though she maintains a love affair with her original genre, Cruz considers and has on occasion accepted other writing projects. She is currently working on a film rewrite and ponders the possibilities of writing for television.

“I think the audience I’d like to reach is increasingly an audience that stays home–a poor audience, a Latino audience, people of color, or people who feel disenfranchised. They’re not going out and they don’t feel entitled to theater. Theater is becoming more and more elitist because we just do it for each other. It seems that there are more theater people at the theater than regular people, and that’s not good.”

Cruz is not reticent, however, about the success theater has afforded her.

“I feel very lucky and blessed, but also I feel like it’s all so temporary. I feel you have to sort of appreciate it when it comes and not take it for granted,” says Cruz.

“I never know where I am in my career–I always think that if I live to be 112 like my great-grandfather, well, then I’ve just started.”