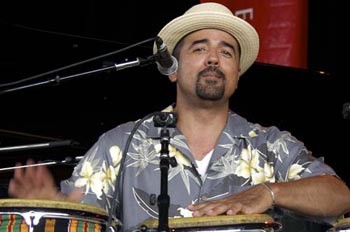 Turning Up the Heat

It’s important for any American to be aware of the Latin/Caribbean roots of jazz,” says salsa drummer John Santos, “and I’ll actually take a step back from that and say it’s important for any American to know about jazz. Jazz is our national art form, our national form of expression. It is recognized all around the world, and it carries a lot of our history; it tells a lot about who we are as a people. A significant part of that history that has been overlooked is the Latin/Caribbean roots of jazz.

“Unfortunately, our media and our history books leave a lot out,” Santos continues, “and this is a part of what gets left out. It’s a very obvious omission when you consider that New Orleans is the birthplace of jazz and that it is a Caribbean port that has centuries of common ground with all of the other major Latin American ports in that region, economically, socially, and culturally. Yet New Orleans is not generally acknowledged for its Caribbean connections. That omission causes a division that shouldn’t be there.”

For three decades, the 47-year-old Santos–born in San Francisco and steeped in the traditions of Puerto Rico and the Cape Verde Islands–has earned a reputation, not only as a bandleader and much-sought-after session player, but also as a feisty torchbearer for Latin jazz.

Santos and the 10-member Machete Ensemble, together for 18 years, perform next week at Sonoma State University. Santos will offer a workshop for jazz students before the concert. The group will be playing songs from its new CD, Brazos Abiertos. Released last week on Santos’ own Machete label, the disc is the follow up to his 2003 Grammy-nominated album S.F. Bay.

“That was totally unexpected,” Santos says of the nomination. “We had never gotten that kind of recognition before in all of the years we had been with different labels, so to have the nomination come at a time when we did it ourselves was just great for us.”

His contribution to the music should not be underestimated. As a respected percussionist, historian, and ethnomusicologist, Santos has played a key role in making the Bay Area an important national and international center of Latin music.

Over the years, Santos has performed, recorded, and studied with such acknowledged masters of the Afro-Latin and jazz idioms as Cachao, Dizzy Gillespie, Tito Puente, Eddie Palmieri, Max Roach, Batacumbele, Steve Turre, and Alfredo “Chocolate” Armenteros.

In addition, he has collaborated with the likes of Bobby Hutcherson, Grupo Mezcla, Santana, Linda Tillery, Cal Tjader, Omar Sosa, and Charlie Hunter. He was the director of the Orquesta Tipica Cienfuegos and the Orquesta Batachanga and is currently a member of the Latin Jazz Advisory Committee of the Smithsonian Institution.

“John Santos has been faithfully carrying the Latin jazz torch on the other coast for years,” JazzTimes has opined.

Or as New York writer Enrique Fernandez has said, “If San Francisco is one of the North American capitals of salsa, John Santos is its mayor.”

Santos remains a tireless advocate for Latin jazz. “It’s important to tell this story in a period when we still have problems related to Colonial times,” he says during a phone interview from his Berkeley home. “In the aftermath of slavery, we still have a lot of ignorance and racism in our communities, and these are problems that in may ways can be addressed through music and the positive message that music brings.

“The truth that the music tells really brings people together.”

You’ve got to love a band with members who say that their influences range from Freddie Mercury to Jaco Pastorius to Ustad Zakir Hussain. But 1974 A.D. isn’t your average band. This eclectic sextet hail from Nepal and serve up a fusion of traditional Nepali folk music and Western rock, all dappled with ample amounts of blues, jazz, and Indian ragas.

North Bay audiences will have a chance to sample their wares on Thursday, Oct. 16, at, 7pm, when 1974 A.D. perform at a benefit concert at the Ner Shalom Temple (formerly the Cotati Cabaret) at 85 La Plaza, Cotati. Admission is $15. Internationally recognized Nepali bamboo flutist Manose Singh also will perform.

Proceeds will benefit both the Jewish Community Free Clinic of Sonoma County, which serves people in need of medical care of all denominations in the North Bay, and the Tehrathum Free Clinic (outside of Kathmandu in Nepal), one of many free clinics sponsored by the Deurali Society, a Nepali humanitarian group.