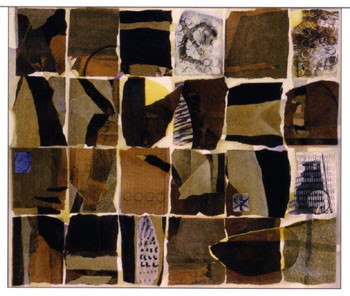 Seed of the Mind

For a painter whose meditative images spring from the traditional Japanese tea ceremony and the elements of earth, water, and air; whose concerns are with the straight line and the circle; and whose palette is specifically drawn from what her professors told her exactly not to use, Chiyomi Taneike Longo certainly gets a lot of mass-media air time.

In a sweetly strange career twist surely never hinted at in art school, the Santa Rosa artist’s large abstract works are regularly seen gracing the walls of such TV shows as Will and Grace, CSI, 24, Just Shoot Me! and Alias. In fact, in a recent Alias episode, a character wouldn’t have been able to escape the evil Eastern Europeans inevitably trying to assassinate him if it weren’t for the clever placement of a oversized Longo painting. Her canvas naturally obscured a secret passageway that led the actor back to a presumably more democratic form of freedom. And speaking of the Democrats, just this past summer Red, White, and Blonde‘s Reese Witherspoon campaigned for justice among plush set hangings featuring Longo’s work.

All of which is both a bonus and a shame. A bonus because she’s getting near-constant exposure, Longo having no idea in advance which TV shows or film companies have chosen to adorn their sets with her work, which is brokered for rent through a Los Angeles production company. More of a doer than a watcher, she hasn’t even seen most of the sitcoms and dramas that feature her paintings.

And a shame because the more one looks at a Chiyomi Longo painting, the more one wants to look at it. A quick blur as it snaps cannily shut upon a secret passageway is certainly not enough. For those who demand the deeper look, a one-person exhibition of her work titled “Doublecounterpoint” shows Oct. 10 through Nov. 23 at the Quicksilver Mine Company.

Making a thoughtful splash behind Reese Witherspoon’s cinematic back and having the first one-person exhibition at a new gallery space have not come easily for Longo. A native of Japan, she emigrated to the United States in 1950 to attend college. In 1961, unhappily married with two young children, she met artist Al Longo, also unhappily married with two young children, in Hawaii. That rare and brilliant gutsy thrash of intense connection that supersedes all other considerations compelled them to break and mend hearts and families, and moved them forward to California.

But then Al stopped painting, for reasons he does not readily discuss. Chiyomi stopped too, explaining that she “just couldn’t bear to paint in the same house.” For 16 years, she kept away from the canvas, slaking her artistic thirst with a growing mastery of the tea ceremony, until, she says seated at her dining table and gesturing to her thorax, she could feel it all welling horribly up inside of her.

So she did what few middle-aged married women might have the courage to do: she enrolled at the San Francisco Art Institute, moved in with her grown daughter for proximity, worked nights at a hotel restaurant, and finally gained her MFA in 1995. She was almost 60 years old.

Such effort isn’t hinted of in her painting, cool spacious abstracts that for the “Doublecounterpoint” exhibition are greatly concerned with the pattern and surface of collage upon panels. She uses the grids and straight lines that mark the architecture and gardens of her childhood as a recurring motif, utilizes the shape of the zero because, she says, “the zero needs another number, it cannot stand alone,” and draws from music, myth, time, and the Zen concept of energy to inform her work.

Working with negative space, with diptychs that manage to both contradict and complement each other, and by inscribing and then obscuring her work in layers, Longo creates individual floating worlds with each piece. With this latest series, she explores the concept of the “seed of the mind.” A Japanese koan tracing the transformation of the soul from a sprout of desire slowly fertilized by a lifetime of hard work, Longo says quietly, “Someday I hope to blossom into the true flower of my mind.” Some would say that she already has.