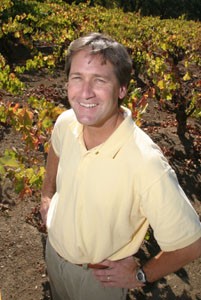 Humanitas Wines cares not only where the grapes come from, but where they go

The Reader’s Digest version,” says Judd Wallenbrock, “is that I make wine, I sell it, and I give the profits to charity.” Wallenbrock, 46, is calling from his hotel room in Denver, where he’s been pouring wines at an expo. Not long before this, he was in Long Beach for a Habitat for Humanity fundraiser, and before that he was . . . somewhere else. Welcome to the world of Judd Wallenbrock, whose lifestyle is an uncommon collision of grassroots and jet-set.

Wallenbrock is the founder and sole employee of Humanitas Wines, a company based out of his Napa home that funnels all profits to charity. Humanitas isn’t charitable by nature; it’s charitable by design. It exists to make money so it can give it away.

After graduating from Cal Poly in San Luis Obispo with a degree in agribusiness, Wallenbrock “got sucked into the wine business and never looked back.” And that was almost 25 years ago. “It’s such a great industry, and you get so passionate about what you are doing. But all of a sudden I started thinking, ‘What happened to all of those ideals I had when I was 22?'”

Ideals like feeding the hungry, making the world a better place, yadda yadda, all got put to the side while Wallenbrock leaped into work. He’s been a wine broker, a winery sales rep, a restaurant manager, and for nine years he worked at Robert Mondavi as director of marketing. He’s currently COO and general manager of De Loach Vineyards in the Russian River Valley.

Meanwhile, Wallenbrock turned 40 and did some major reflecting, as people do. It was at that point that he developed the hankering to do something good in the world. While on a trip to Italy on wine business, Wallenbrock saw a door in Florence, and something inside him clicked. “On this door was a wonderful carving of a couple of monks handing out food, and it was called Charitas. It struck me, that’s what I could do for my own wine company. I could functionally use the model of Newman’s Own–in order to create revenues for charity, sell a product that you love to do.”

Paul Newman’s entrée into charity work was greased by salad dressing. Wallenbrock stuck to what he knew best: the wine industry. But he knew he’d need a compelling story to stand out from the rest of the crowd.

“Most people can remember that they had a really nice Chardonnay last night,” Wallenbrock says, “but they can’t for the life of them remember what brand it was. And if you don’t remember it, how can you ever tell somebody else to try it?”

He discovered humanitas–meaning “philanthropy, kindness, human nature”–in his Latin dictionary and copyrighted it, and in August 2001, Humanitas was in business. “The next phase of it was to make that quantum leap,” Wallenbrock says. “Which was huge, because I was a nicely paid executive at the time, and here I am living in Napa, two kids and a third one on the way–and boy, you don’t just pick up and do this. But I had to. I was so driven by it, I had to do this thing.”

One year later, Humanitas released its first wine. Wallenbrock called it the Humanitas IPO–initial Pinot offering. With an e-mail to 200 people, Wallenbrock heard from people he hadn’t initially sent to e-mails to. “I knew I had struck a chord.”

Funds from Humanitas support three charities: Habitat for Humanity, Reading Is Fundamental, and America’s Second Harvest, an umbrella operation for food banks. “It all boiled down to things that I felt strongly about,” says Wallenbrock. “Rather than doing a shotgun blast–giving 5 cents to about a hundred different charities–I wanted to be really focused.”

The winery is a for-profit operation. “And I do that on purpose,” Wallenbrock says. “I call it ’cause capitalism.’ Rather than give our profits to shareholders or employees, we’re giving it back to the community.”

Funds raised from Humanitas don’t go to the charities’ national chapters. “The whole purpose behind this thing is to give back in to the communities where the wine was actually sold,” says Wallenbrock. “When somebody’s in Denver drinking the wine, they know it’s going to come back to Denver.”

About 20 percent to 25 percent of Humanitas wines are sold directly to the consumer, while another 70 percent goes to restaurants. The remainder is sold retail. You can find it at selected Whole Foods, the Bottle Barn in Santa Rosa, and a few places in Napa.

Wallenbrock aims to be able to support his family solely through Humanitas, a reality that’s probably a few years away, at least. “What a lot of people do in the wine business is they start with a whole bunch of money, they build some big winery, and it costs them millions and millions of dollars. I took the opposite approach.” Humanitas has no paid employees, no overhead, and the only assets are barrels and the wine in them. Wallenbrock does everything–he writes and sends out the newsletter, pours wine at events, handles distribution, promotion, and makes and blends the wine. “It’s hell, but it’s really a rewarding hell.”

Wallenbrock’s house is a bonded winery; he makes a certain amount of wine there for special bottlings and auction lots. The Pinot Noir is made at custom crush facilities in San Luis Obispo. For other Humanitas wines–Cabernet Sauvignon and Chardonnay–Wallenbrock acts as a negotiant, meaning he buys in bulk and blends and bottles himself.

Through Humanitas, Wallenbrock can do what he loves and still make a difference. “One of the things I learned is I’m not very good at doing actual charity work. I get depressed when I see poor people and people who have real needs. I liken it to being a doctor who doesn’t like blood. So if I do what I do well, I can give money to people who do what they do well. And those are the real heroes out there, out there every Saturday working with Habitat for Humanity or delivering food to shut-ins. Those people are awesome, and they are the ones that drive me.”

Humanitas may be visited online at www.humanitaswines.com.